I’ve just finished a new painting which I’d like to show off.  I recently purchased a graniteware colander on EBay and decided to use it as a prop for a still life.

I filled the colander with fruit and placed it on our dining room table on a sunny morning.

I took some reference photos, made some preliminary sketches and finally settled on this composition. 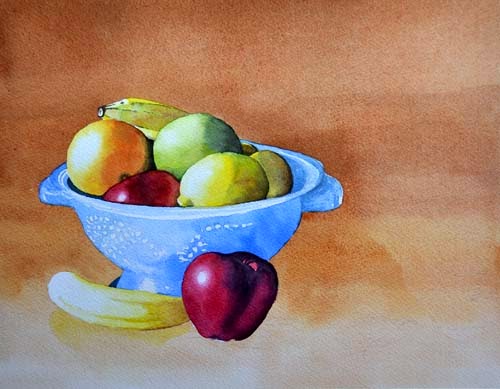 The next step was to add more detail and some shadows. 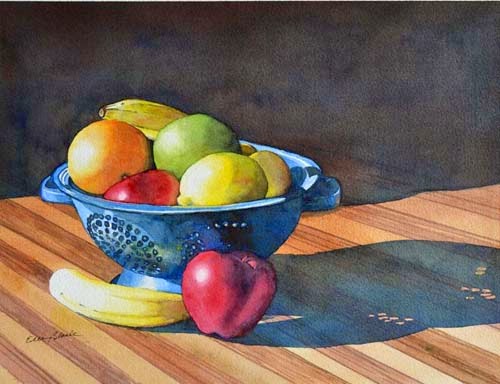 I forgot to take pictures of the stages that brought the work to this conclusion. 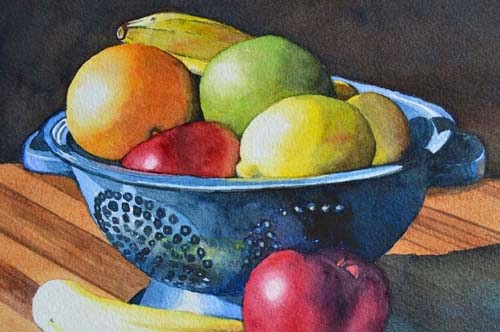 I’m pretty happy with the way it turned out.  It is available for purchase on my Etsy Shop, Watercolors by Leenie.

I’m not through with playing with the colander and the fun shadow it casts.  Now I’m working on painting a picture of it full of eggs.  I’m finding them to be difficult subjects even though they hold very still.  Trying to make a smooth transition from shadow to highlight is really scrambling my brain.  Maybe I shouldn't put them all in one basket.
Posted by Leenie at 12:06 PM 10 comments

DUST IN THE WIND

…to a tiny house on a sandy hill in central Idaho.

There they raised sheep, poultry and a few crops.

Mother told of one spring in the 1930’s when the wind never seemed to cease.  One day the wind stopped blowing from the west and then turned to come at them in a howling gale from the east.  It blew so long and forceful that sand sifted through the cracks of their house and covered every surface. 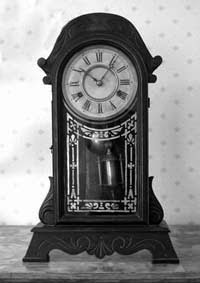 Even the clock was clogged and stopped ticking.  School was closed and drifts of sand blew across the road so deep that when the storm finally passed a few days later, a road grader had to be sent out to clear the way.

Fast forward a few decades to a particularly quiet afternoon on our farm in central Idaho.

My little brother and sister and I were playing in the sand box when we looked up and saw a wall of dirt blowing in from the south. Suddenly wind whipped around us and blew us across the yard.  Moments after we ran inside the house, Dad and our older brother, Jack, rushed through the door.

We watched through the windows as tumble weeds flew through the air and chickens fluttered for shelter.  Then Dad let out a wail.  The wind was tearing the roof off the granary.  Dad called Jack and they hurried out into the storm.  They gathered tools and haywire from the shop and climbed up on the granary while the wind whipped dirt through their hair and clothes.

They used the electric drill to make holes in the roof and walls of the building, then they threaded the haywire through and lashed the roof down.

When the excitement was over and life returned to routine a day or so later, I climbed on the roof of the granary to examine the repair.  The wire wrapped around the boards had saved the building and stood as evidence of the resourcefulness of a good farmer. I’m not certain but I wouldn’t be surprised if the wire remains there even now.
Posted by Leenie at 6:00 AM 9 comments