When our family was growing up I could get a welcome break from sticky kids and demanding teens when I was working in the vegetable garden.  Children knew if they came around they would be enlisted in the job.
Washing and waxing a car is a similar task.  It’s a justifiable reason to spend time in the outdoors with results to make one proud and no interruptions while working.
I parked my Subaru on a shady part of the lawn late in the afternoon and proceeded to “wax on, wax off.” The air was comfortable, birds sang, there were no biting insects and I enjoyed some thinking time. 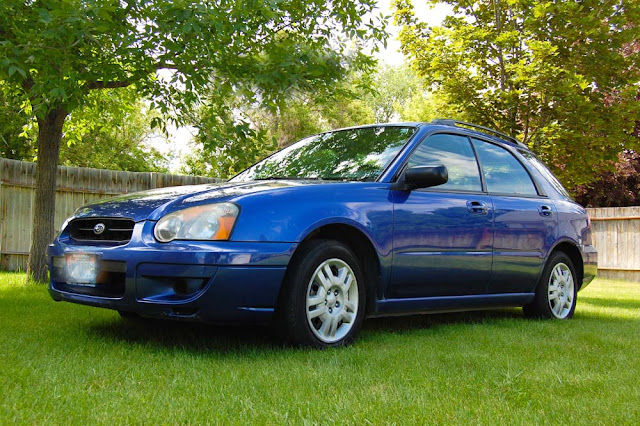 I worked over the hood which has been freckled by the pea gravel which our department of highways spreads on icy roads as a poor excuse for sand.
The doors bear scars from the times my car was left alone in the grocery store parking lot.
The back fender has a dent from the time DH parked behind me in a driveway and I put my vehicle into reverse without looking.
The front bumper has a big scrape from being backed into while Subaru was waiting for me in front of the beauty shop.
And there is a big dimple on the right rear door from the time I parked near a golf course.  I still have that dang golf ball in my glove box. 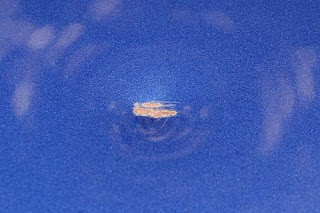 An unfamiliar ding on the roof had me puzzled.  Then I remembered.  There was that time when I stopped at a railroad crossing.  A train was slowly approaching. I could have made it over the tracks and been on my way, but I decided to just wait.  A pickup truck pulled up behind.  In my rear view mirror I could see the driver was troubled. “Too bad,” I thought. “I’m not taking chances on your account.” 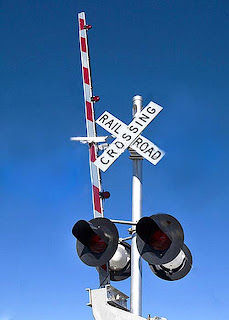 The approaching train sounded its horn.  Then I heard honking from the pickup behind me.  “What does he think—I’m a complete dufus?  I’m not pulling forward in front of an oncoming train!”
I heard the DING! DING! DING! from the signal.  Then the long flashing crossing arm came down—right on the top of my car.  I had no choice but to sit there with the pickup truck behind me, the train rushing by in front and the striped pole lying across my roof.  When the train passed and the arm rose I pulled forward across the tracks and drove on—feeling like a complete dufus.
So there in the cool of the evening I finished the shine job on my little auto and rubbed an extra layer of wax in the rusty ding on the roof.
Posted by Leenie at 9:58 AM 12 comments

This is a re-run of a post written two years ago that was accidently deleted from my blog.  My apologies to anyone who has already read it.
Aguas Calientés is a small town along the at a terminus of a railroad.  The place was built up mainly to accommodate visitors to the wondrous ruins of . 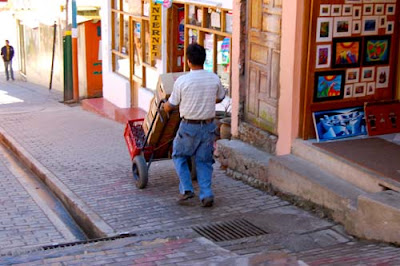 In some places the streets are steep walkways with steps and terraced landings on one side.  On the other side are narrow ramps for the use of small carts and hand trucks that bring goods to the businesses of the area.
When school lets out in the afternoon children walk up these streets on their way home. 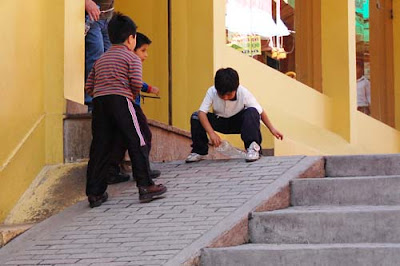 I was taking in this whole scene when I noticed a handful of boys. 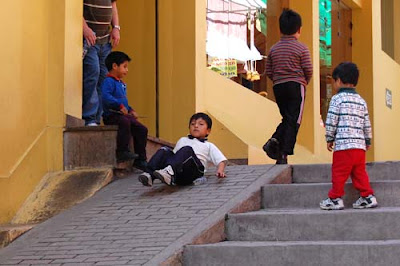 From somewhere they produced a flattened two-liter plastic bottle. 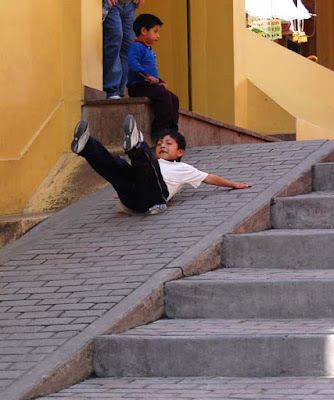 They stopped at the top of one of the ramps and took turns riding their “sled” to the next terrace. 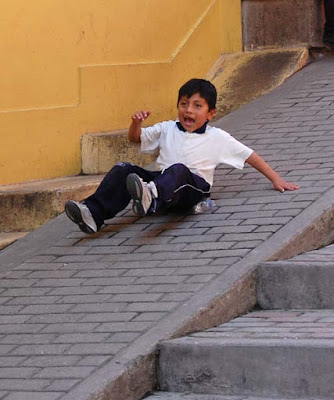 Plenty of shouts and laughter followed the rider as he spun down the bumpy slope. 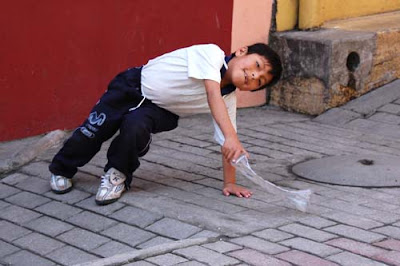 This went on for a while until a uniformed policeman approached.  The ride and the boys quickly disappeared.
Posted by Leenie at 11:40 PM 6 comments

There is a lake with a name that makes English-speaking school children giggle when they study it in world geography.

It holds the title of the highest commercially navigable lake in the world at 12,500 feet (3812 m) above sea level.  Lake Titicaca is bigger than The Great Salt Lake in and lies across the border between and .
DH and I visited there with a group a few years ago. The thin air gave me nosebleeds.  DH and several others suffered from the headaches and nausea of altitude sickness.
Centuries ago the Uros people began making artificial islands out of the torta reeds of the lake so they could isolate themselves from their enemies.  The reeds grow in abundance in the water and look a lot like cattails. The reeds are edible and are also used to build homes and boats. 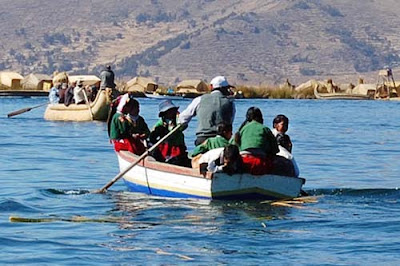 school bus
The lower layers of the islands decay in the water and are replaced from the top with new layers making a dry, but spongy, surface. 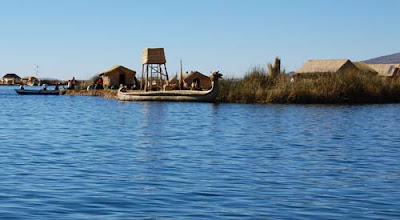 The islands we were allowed to visit were about 70 yards across.  The people had built little houses the size of camping cabins and tents.  There was also a school and an observation platform from which to survey the surroundings. 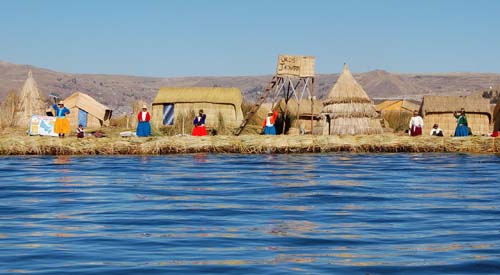 The people were ready for our arrival wearing brightly colored native clothing. 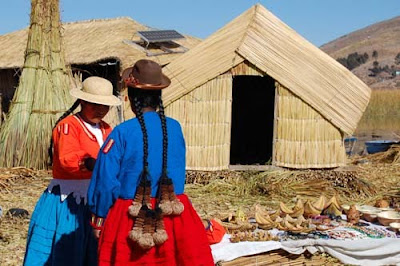 They had items for sale spread out on the straw-colored surface of their island between the little houses.  They waited patiently while our guide instructed us about the history and traditions of the “Islas Flotantes.”
When he was through the shopping began.  I had already bought a miniature reed boat from a booth set up at the hotel which was attended by some sweet local ladies who filled their spare time knitting and working on their crafts.  So, while everyone else bargained for goods, I took pictures. 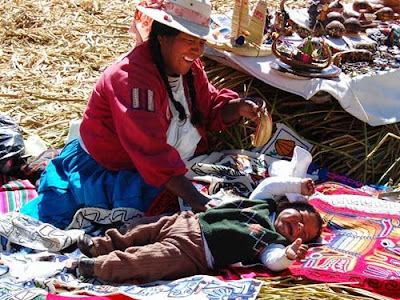 The mamas had their babies fully dressed in warm layers of bright colored wools.
I had a one-sided conversation with a man who told me, in Spanish, all about how they cooked over a fire while living on a pile of straw. 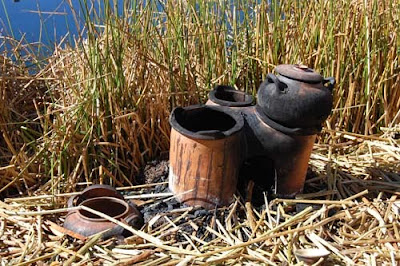 They had clay pots that sat on a tiny ceramic stove.  The fuel, of course was dried reeds.  I filtered through the foreign language and hand gestures to hear a story about how fire had burned under the surface of the island and had set the homes on fire.  Many jumped into the water and some of the children drowned.  “Muy triste,” or, very sad, he said. 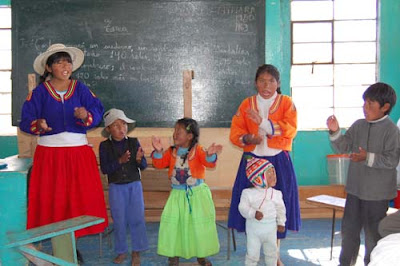 We were allowed to visit the school and then were offered a ride on one of their boats.  DH decided not to add motion sickness to altitude sickness so he stayed behind. 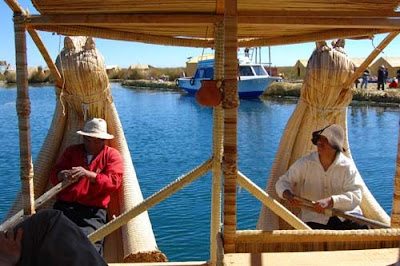 The boat was constructed of tightly bundled reeds in a double-pontoon shape with a cabin that held several passengers.  The front ends of the boat were made into the shape of puma heads complete with teeth.   It was manned by two men, a father and a son, each with an oar. 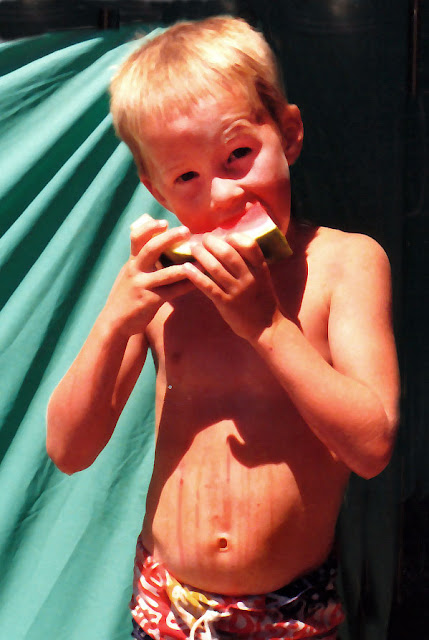 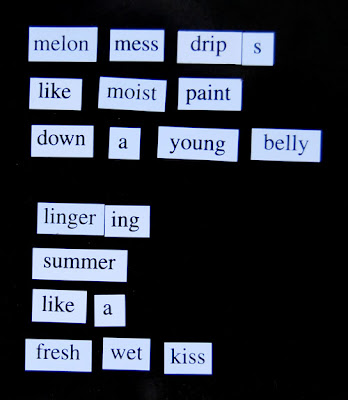