ON THE EDGE OF GREATNESS

This is going to be a great success, 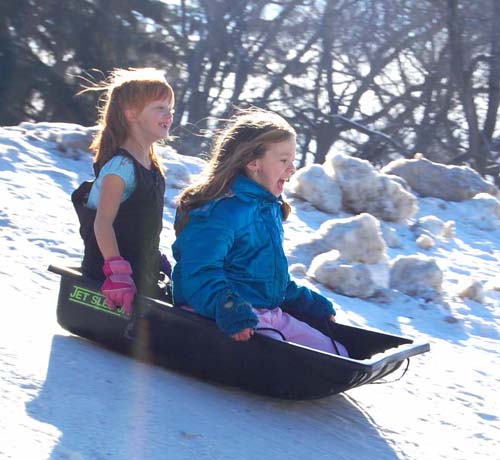 or we're going to have a great story to tell-- 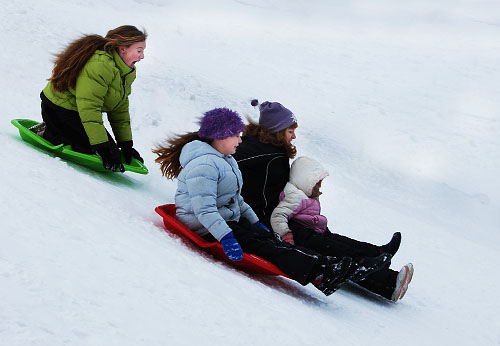 So basically we're on the edge of greatness!
Posted by Leenie at 11:18 AM 7 comments

MUST BE ALMOST HALLOWEEN

If your Halloween costume is made to fit over a coat... 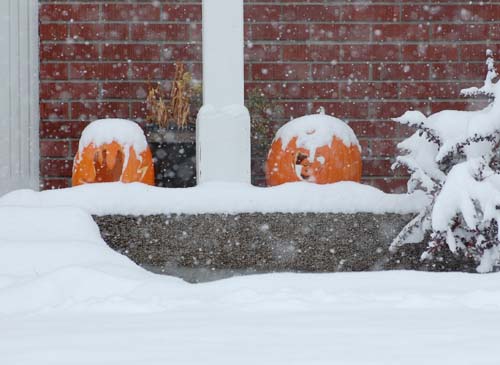 You probably live around here. 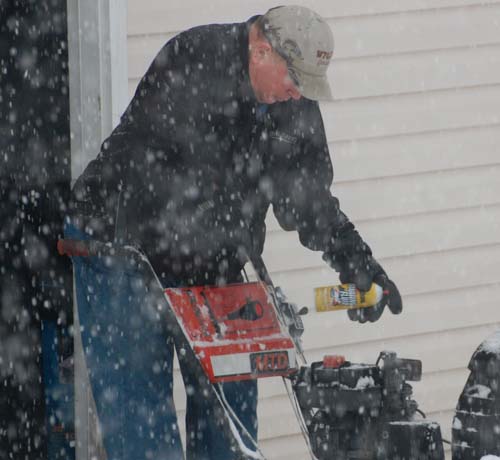 Crap!  Shudda got this thing tuned up earlier. 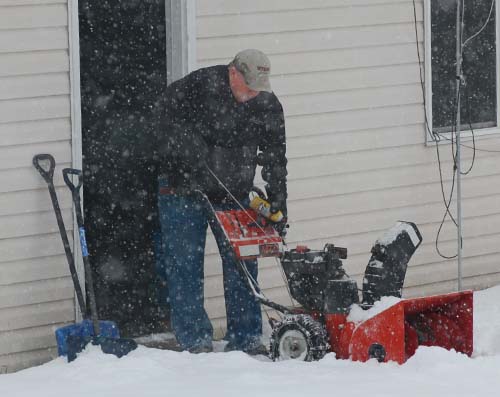 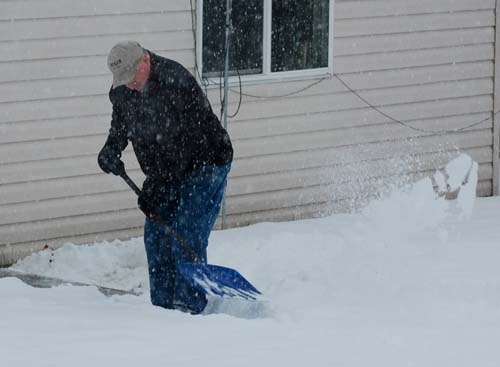 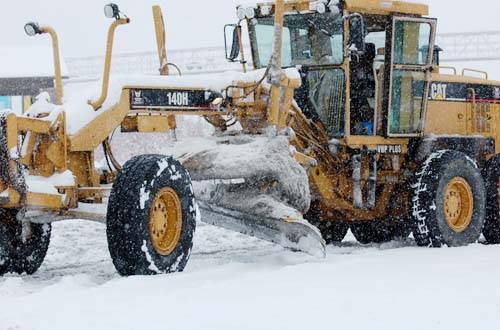 Meanwhile, down the street the big plow is coming
to fill in the driveway.
Posted by Leenie at 11:01 AM 12 comments

When the state of Oregon is mentioned most people think of beaches on the Pacific, festivals of roses, snow capped mountains, mossy forests, and … 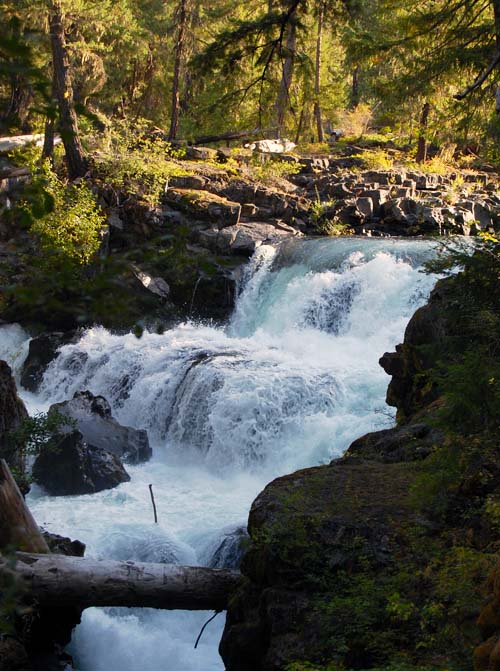 …rivers flowing into misty waterfalls.  And it’s true these are all part of the package.  The popular north-south route along the coast is a superb scenic highway, as is the east-west drive down the Columbia River Gorge. 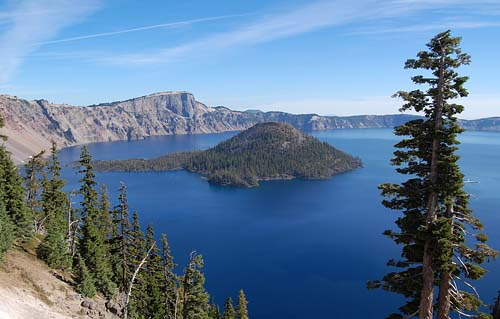 …and after you realize your photos will look just like every other tourist’s snapshots of Crater Lake unless you pose someone in front of the scenery which sort of defeats the purpose of landscape photography.   And then your next destination is the State of … 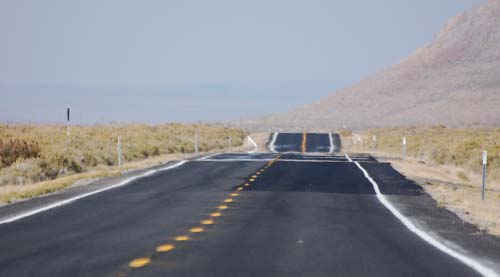 …you have to cross the Deadly Desert like we did.
And since we didn’t have a hot air balloon or a flying sofa,
we just had to drive and drive for hours. 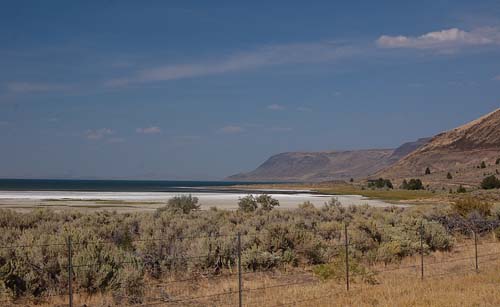 , worthless as drinking water and rimmed with —alkali.
It broke up the monotony of all that wilderness covered with brush and grass. 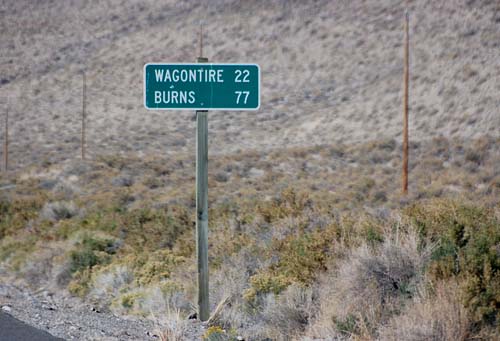 I missed getting a photo of a coyote that casually crossed in front of us not long after I took this picture because I was trying to explain to a guy who called my cell that we wouldn’t be able to help him with his problem because we were REALLY out of town. 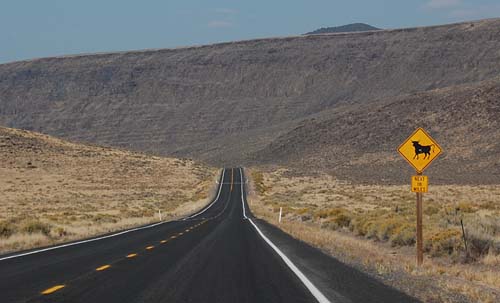 This is bad country.  Even the image on the sign that means,
“watch out for range cattle along the highway,”
is represented by an ornery bull ready to punch out your headlights. 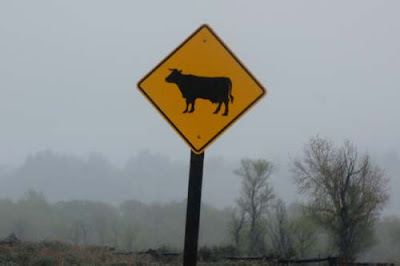 ’s same kind of sign is a mellow cow just grazing by the side of the road.

On and on we went across the unending wasteland which is really just more of that  took in out of pity.

We had big plans to find a nice place to stay in , but we just ran out of day and endurance before we ran out of road.

So when we arrived at a little town called Vale we were thinking, “Any port in a storm.”  The only motel there looked okay so DH couldn’t understand why I was getting all PSYCHO... 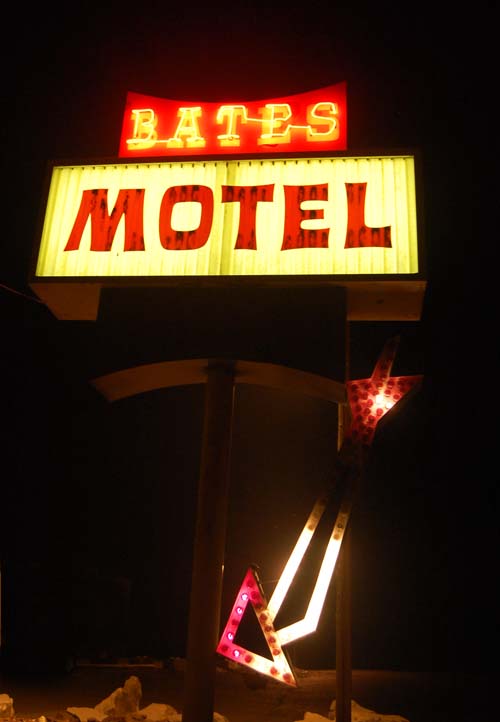 …about the name, BATES MOTEL.  He still didn’t get it when he came back with a room key and I asked him if a skinny young guy was at the front desk.  “No, it was an OLD LADY.”  Even worse!

Our room was clean but small.  The television was on a low shelf and I STABBED my head on the corner of it when I stood up after opening my suitcase.  Not much BLOOD but I was still freaked out.  We were so tired we didn’t even bother to SHOWER before falling asleep. 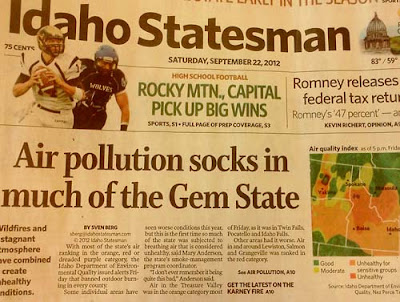 After an uneventful night we drove on to the next morning where we got breakfast.  The air was thick with smoke from wildfires.  We knew we were almost home.