Gandy Dancers--Not What You Think 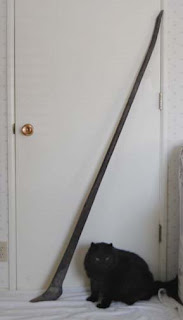 My brother told me one of the items I found in my dad’s shop was a gandy. “Haven’t you heard of gandydancers?” I knew they were railroad workers and that’s about all. The tool looks like a giant crow bar with a cow’s hoof on the end. It is 68 inches long, solid iron and weighs 35 pounds. It was all I could do to lift it. Since ancestors on both sides of my dad’s family were in the railroad business---even helping push through the first narrow-gauge rail from Ogden, Utah over Monida Pass to Butte, Montana in 1881—I decided to keep the huge bar. I can't be certain my grandfather or father actually used it, (Dad may have bought it at a farm sale), but I consider it part of my heritage.

Now what are Gandy Dancers? I go to the all-knowing Wikpedia. Gandy dancer is a slang term for workers who maintained railroads in North America. Hand crews used specialized hand tools known as gandies to lever rail tracks into position. Oral history from some railroad towns has it that the term originated from the gandydancer's original job of positioning rails to be nailed to ties. These were carried by the crew straddling the rail at intervals and reaching between their feet to lift and carry it into place, in the process looking like a line of waddling geese. They became known as ganders and the process as gander dancing, ultimately corrupted to gandydancing.
For each stroke, a worker would lift his gandy and force it into the ballast to create a fulcrum, then throw himself sideways using the gandy to check his full weight so the gandy would push the rail toward the inside of the curve. Even with all impacts from the work crew timed correctly, any progress made in shifting the track would not become visible until after a large number of repetitions.http://www.youtube.com/watch?v=025QQwTwzdU&feature=related
(Using our cat to establish relative size was probably a bad idea. He weighs 23 pounds)
Posted by Leenie at 8:24 PM

you learn something new every day! Thomas looks thrilled to be a part of your blog experience! LOL Are you going to hang that thing on the wall to display??? You could use it to hold up your chimney! Nice blog format, I love the pictures! How fun! I almost could see the ponies in your picture!