A CHICKEN AND A STICK 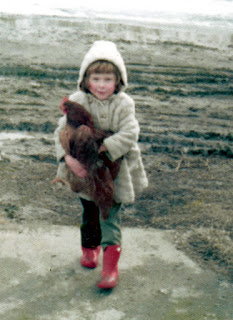 When we were kids on the farm my brother asked me to help him catch a chicken so he could show me a magic trick. In no time we had one of Mom’s little red hens cornered in the barnyard. Brother had me bring a small stick while he gathered her up and smoothed her feathers until she was calm. Holding on to her legs, he laid her down on her side. He had me place her head against the ground and used the stick to draw a straight line in the dirt away from her beak. He repeated drawing the line a few times and the chicken went into a trance. She relaxed and lay perfectly still for several minutes before getting up, fluffing her feathers and strolling away.

Contrary to legend, a little red hen is not intelligent. She can’t plant wheat or bake bread. In fact, a laying hen is about the most simple-minded creature created. Therefore, hypnotizing a chicken is an easy thing to do. I thought this was marvelous and decided later to see if I could repeat the stunt. Sure enough, when I drew the line with the stick the hen went into a tranquil state of bliss with her little yellow eyes staring up at the sky. She continued to lay there…for a long time. Like the sorcerer’s apprentice I did not know how to undo the spell. Fearing I had ruined a valuable laying hen, I left her reclined in the driveway, grabbed the stick and ran away as fast as my short legs would carry me. I watched from a hiding place and finally, to my relief, the hen picked herself from the dust and wandered off.

I am not making this up. In fact, if you Google “hypnotizing a chicken” you will probably find plenty of verifying sources. This makes me wonder about the intelligence of people who are easily hypnotized.
Posted by Leenie at 11:11 PM

we used to draw a circle around them...same thing happened... they just stayed there.... for quite some time! silly things....

Good memory. I'd have probably done the same thing. RUN AWAY!!

Huh? What? Sorry I was mesmerized just reading this. What were you saying about those who are easily hypnotized? ;)

Love that photo! I kept waiting for the big hack 'cause that's what got me on the magic trick I watched after my mom calmed our chicken. Then there was no question about getting up and running it off. Unfortunately, with no head, the chicken did not run the race.

Your last line cracks me up!