HOW BAD COULD IT GET? part 3

(This post is the third in a series of five. The following will mean more if you read the two earlier posts.)
It was the second weekend in December 2007. The temperature had dropped well below zero Fahrenheit and there was snow on the ground when DH and I could hear water running somewhere in our house plumbing even when all the faucets were turned off. This is always a bad sign, especially in cold weather when water can freeze in a pipe and cause it to split. By Monday we had traced the leak to an underground pipe that brought water into the house from the street. DH started calling plumbers and backhoe operators. For some strange reason he found both available that day. Almost before we knew it there was a guy with a backhoe in front of our house awaiting instructions. 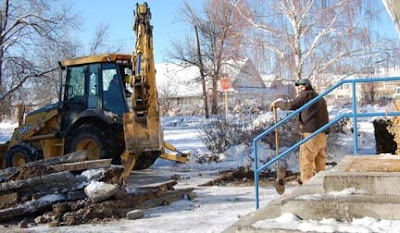 The backhoe removes a section of the concrete parking area.

By the time a trench was dug the plumber was there putting down pipe. 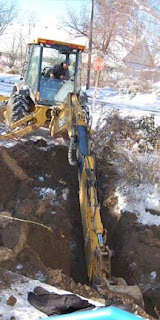 I came home from work at noon to see the repair job well underway. The ditch cut right through the new garden. Then it sliced through the roots of a thirty year old birch tree. It was like watching surgery on a loved one. 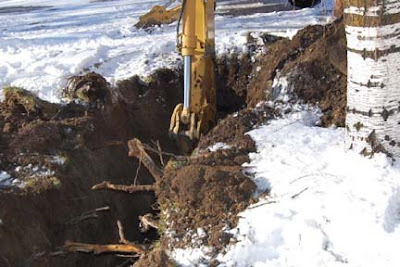 The roots of the birch tree get amputated

In an hour or so the new pipe was installed, the backhoe had lifted the pieces of a section of our concrete parking area into a dump truck and was backfilling the trench. By three that afternoon the workers were gone and we had water again 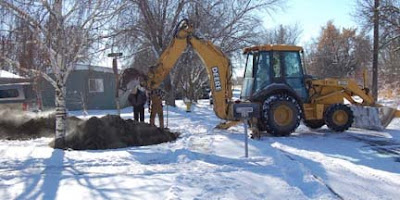 Steam rises from the trench in the below zero weather
The little garden I had worked so hard to move away from any danger of construction was a disaster. Half the stones from the pathway were stacked in a heap by the house. One of the barberry bushes was up rooted and tossed into the garden. Other shrubs ended up buried somewhere in the trench. The ditch had gone right through the spot where the new hollyhocks had been. Nothing was there now but dirt---and a new water pipe. 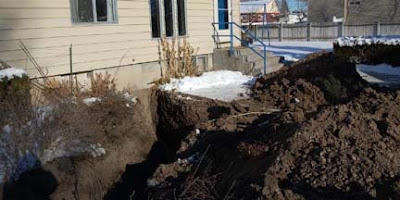 The trench begins at the house---right where the purple hollyhocks were planted
(to be continued)
Posted by Leenie at 6:41 PM

Oh ouch! That had to be painful.

Oh, Leenie....you had water again, but no flower garden....or a very damaged one. My goodness. Has the tree survived ok? I hope so.

I'm reading this on Tues 4/7....I have a backhoe pictured on my blogpost today, too!

Awww man, I would be so disappointed. I'm sure you were. OK, next instalment is resolution, right?

Oh but running water is a good thing. So sorry for the damage especially after all the hard work of moving everything. I look forward to the next post. I just know that you will have made it fine.

Oh Leenie - it all looks painful, the process and the bill.I agree with the above comment, running water is a good thing, so what comes next?