The evening was cold and the house had been empty all day. I helped the guys bring in firewood for the stove in our basement. DH gathered up some newspaper and prepared to start a fire. When he bent over and opened the door he was hit in the face by a flutter of feathers and soot. It startled him enough that he fell over backward.

I was across the room and could see that a creature had flown out of the opened stove and was now circling the room. When it came my way I captured it with my hands. It was all tarnished with ashes and soot; and it wasn’t Santa Claus. It was a house sparrow. It was so frightened I could feel its heart beating. Still, it made a show of bravado by opening its beak at me. Even its tongue was black.

The kids came near to examine our visitor. It was amazing for us to see the small free spirit up close. DH kept his distance. It had already scared the daylights out of him and birds were not his favorite animal. 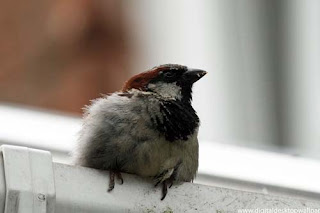 Not the bird that came to visit, but one like it.
We guessed it had been warming its tail feathers over our chimney and had fallen down the long cinder brick tunnel. Flying straight up from a dead stop would be an impossible escape. Fortunately for the sparrow the fire was out at the time. Instead it went around the corner to the stove pipe and past the damper into the fire box.
I took the sparrow to the door and released it.

And ornithophobia is the word for the fear of birds.
Posted by Leenie at 6:35 PM

Wow! At first I thought you were going to say it was a chicken - that would be a terrifying experience for your husband! Cute little bird!

Poor DH! Poor little feathery one. Now you have a good family story to tell. :)