Our local newspaper occasionally carries stories about sending moose back to the wild.  The big creatures, which look like they're made up of parts of cows, horses and donkeys with the addition of camel legs, wander into urban areas and either take up residence or can’t find their way back to the river bottoms. 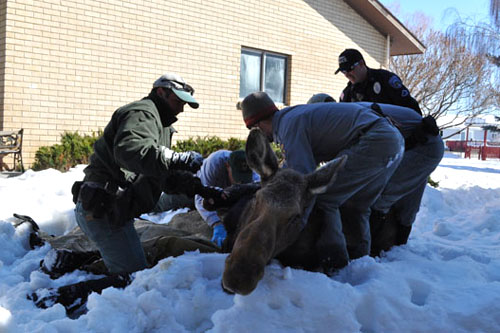 (Photo from the Rexburg Standard Journal)
The latest one was nick-named Lucy.   After she spent four days stomping through snowy yards and gardens in the neighborhood, the Idaho Department of Fish and Game conservation officers were called to tranquilize and transport her to a safer place.  The officers reported having to deal with seven other moose in the past several days.
When I went cross-country skiing on one of the local golf courses the other day I could see the skiers weren’t the only ones who had found a winter use for the greens and fairways. 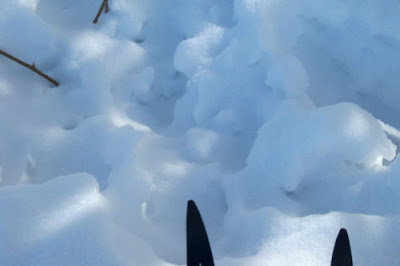 There were tracks in the snow bigger than a man’s hand all over the course. 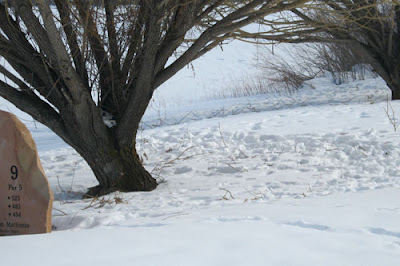 Moose had been making meals of tree branches.  There were circles of tracks around almost every tree.  The new part of the golf course where the trees are young and tender seemed to be the favorite banquet place. 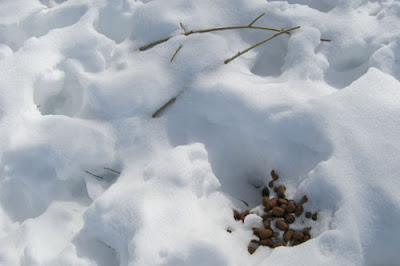 The browsers had also left their calling cards in the snow… 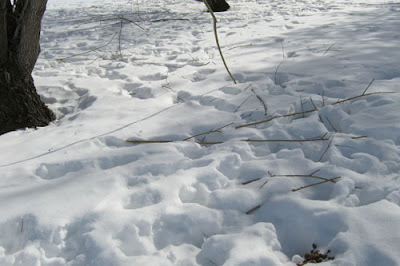 …along with plenty of broken branches.
On a personal note—moose dung really messes with cross-country skis. 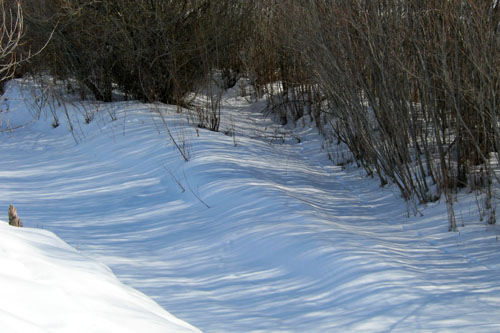 This is just a photo for Shadow Shot Sunday. And I just realized I've published 402 posts. wow!
Posted by Leenie at 6:18 PM

lol - yes, Moose need to blaze their own ski trails! When we lived much farther north, we had moose on our property from time to time. You could always hear them crashing through the woods before you could ever see them. I love your description, Leenie - they are like that - a compilation :)

I'm glad we don't get anything like that wandering the streets here!! And of course I love your shadow shot -ever since I started participating in Shadow Shot Sunday, I have become addicted - and malcolm and Stuart hunt out shadows as well!!

These are comical yet beautiful photos..wow, a banquet under the trees! Tracks every where. Sound like they left a little something for everyone..at least a reminder! I could see how a skier could run into a few problems-:)

We have baboons and you have moose! ALways strange to see wild animals wandering down a suburban street, I think. On the other hand, they are probably not that wild anymore. Hmmm. Why is the plural of moose not meese?

I hope Lucy the moose made it home to her roost! You're right, they are mighty strange looking critters... but still sweet.

Mooses on the looses indeed- They used to scare the poo out of me when I worked in Coulter village- at night, on the road- HUGE! Honery! I would love to see them again.

Cool I like this. I see ten deer behind my house everyday now. I follow their tracks daily in the bush. I have only seen a moose once.You should get snowshoes they go through moose droppings. LOL

Ew! Moose dung! Not something we deal with in Tulsa. In Orlando our destructive protected creatures were the Sand Hill Cranes. Dug holes all over golf courses. Here in Tulsa, Canadian geese take up permanent residence. They stop traffic when crossing roads with their young in the spring. But nothing so large as moose.

There is something so prehistoric about a Moose.

Wow, indeed. That's a lot of posts.
I love your perspective on the world.

Moose are so impressively big! Are they dangerous at all? I wouldn't want to get in the way of one!