WATCHING BIRDS AND OTHER THINGS 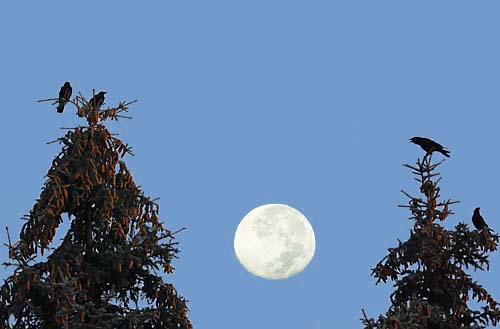 In fact, the sky was clear and a full moon was heading for the western horizon.  I didn’t know if I was hallucinating or it was finally-FINALLY spring when I went out with my camera this morning. 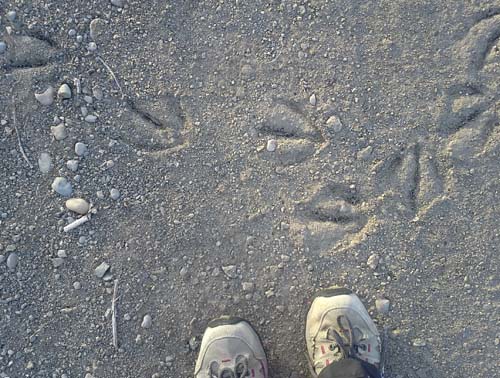 Why did the Canada goose cross the road?  Because it was the chicken’s day off.

Then I came across some odd tracks. When I went home I checked the all-knowing internet to see what I could find. 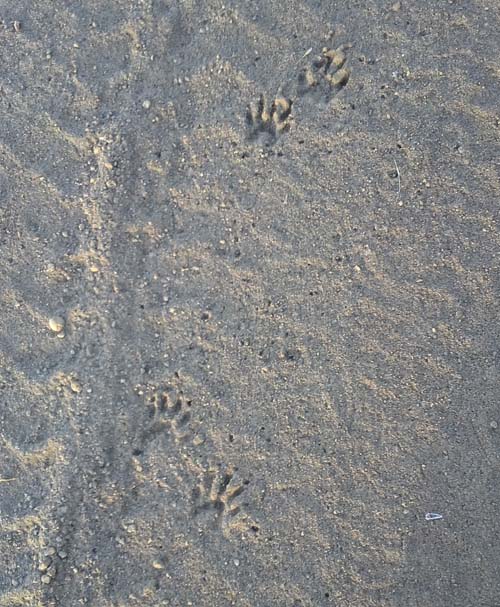 “Look in the mud near the water for footprints. Both have claws designed for digging. Beavers have five very distinct toes on their front feet. Their hind feet are about 5 inches long and are webbed. A muskrat’s small front feet appear to be four-toed, but there is a tiny fifth toe that is hard to see.”

I count five toes.  It could be a beaver, but since beaver have webbed rear feet and their tail drags these are probably rock chuck tracks.. 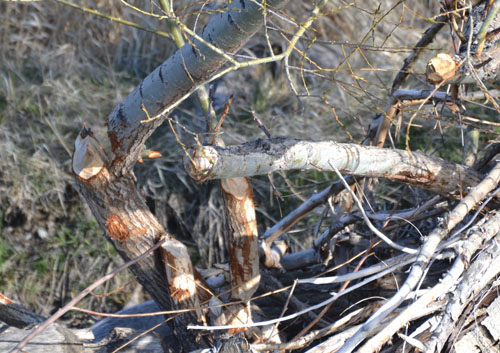 But I guessed beaver are around by the trees gnawed by those big front teeth to make dams in the river. 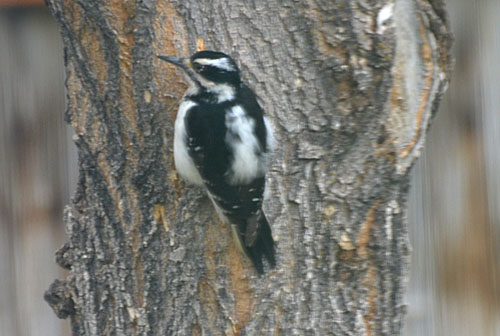 I know she’s covered with feathers but I’m pretty sure this is a hairy woodpecker. 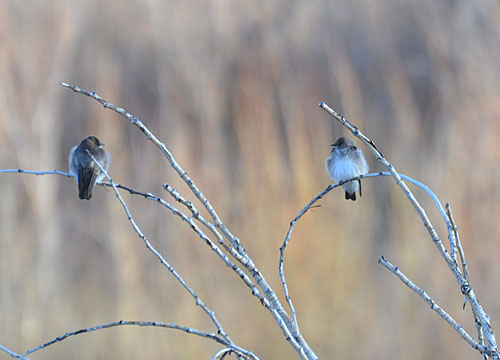 The dark-eyed juncos were not trusting the warm weather.  They were still wearing their down jackets. 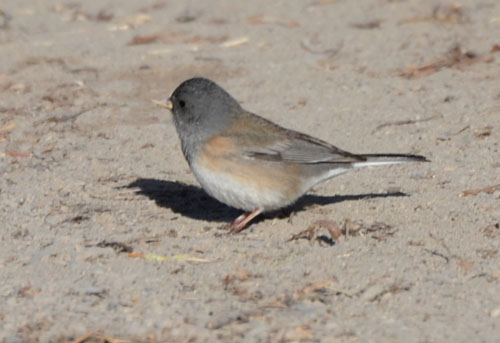 Another junco, but this one has pinkish-brown sides so I’m guessing it’s an junco. 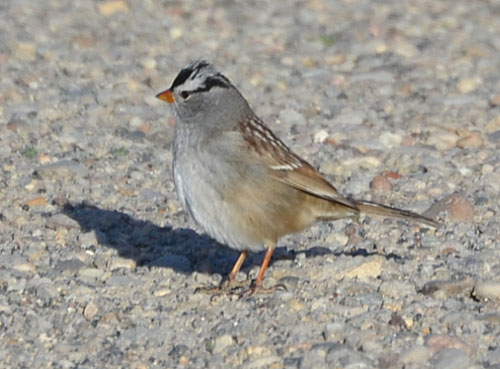 I like to call crowned sparrows, “biker chicks,” because they wear do-rags. 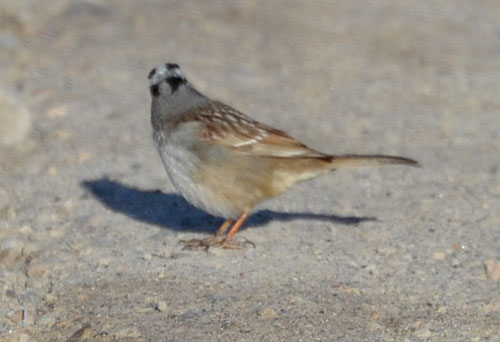 See how their head scarves are tied in the back? 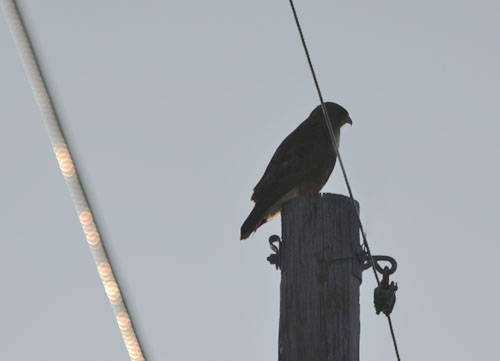 The hawks have returned to their nest by the pond.
I would have walked right by this one, but he called me names and told me to buzz off. 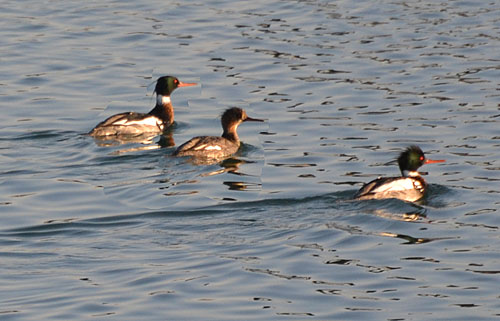 These mergansers stopped for a break on their migration north. Someone needs to help them with their hair products. 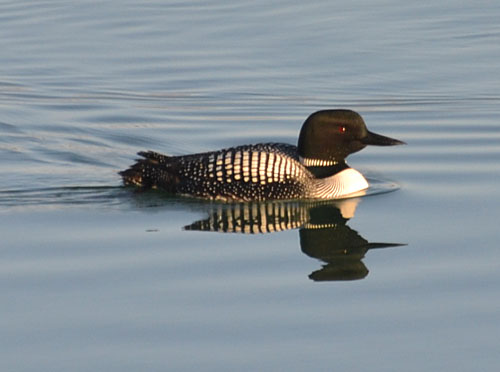 Ethel Thayer: Look! Look! Oh, look, I've spotted the loons! Oh! Oh, they're so lovely.
Norman Thayer: Yeah, they're huge.
I never saw such big loons in my life.
Ethel Thayer: Those are boats, you poop. Come in closer.
(On Golden Pond-Katherine Hepburn and Henry Fonda) 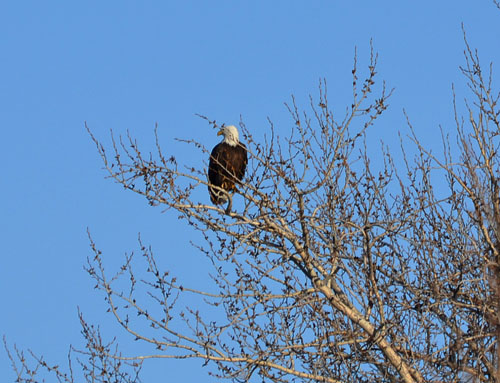 Here’s something I didn’t expect.  A bald eagle! 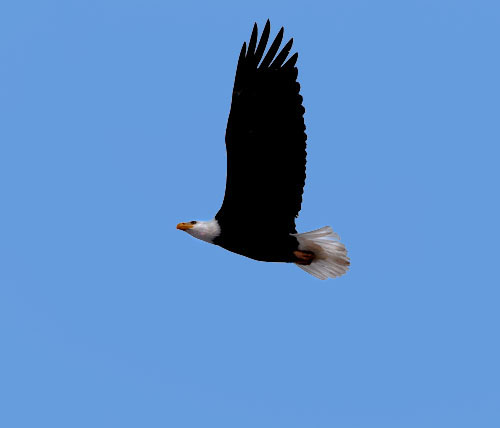 How do you identify a bald eagle?  All his feathers are combed over to one side.

So after taking pictures of almost everything that moved… 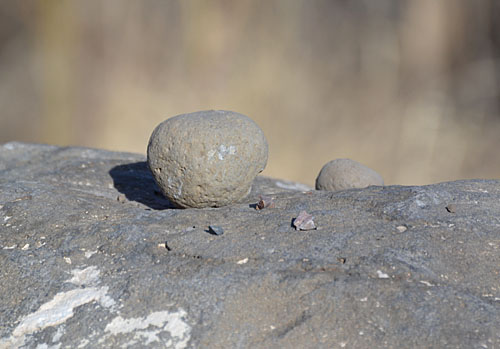 …and some things that didn’t.  I walked home. 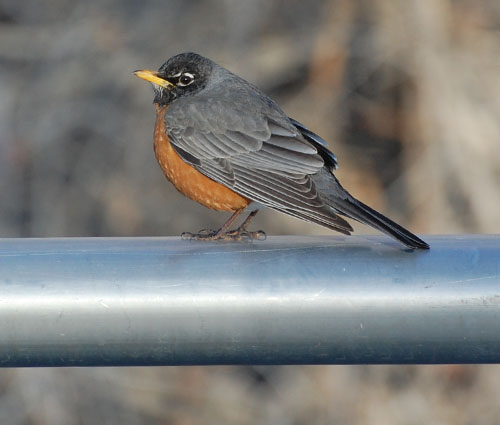 Two robins were sitting in a tree. “I'm really hungry,” the first one said.
“Me, too,” said the second. “Let's fly down and find some lunch.”


“I'm so full I don't think I can fly back up to the tree,” the first robin said.


“Me either. Let's just lie here and bask in the warm sun,” said the second.


They plopped down, relaxed and soaked in the rays.


But as they dozed, a big fat tom cat sneaked in and gobbled them up.


As he sat satisfied and licking his lips, he thought, 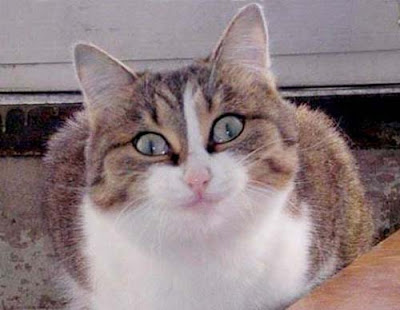 I'd say you and your camera had a successful walk! I have never seen a beaver...the picture of those branches gnawed in half, remind me of a children's book by Thornton W Burgess that I had when I was a girl. You certainly have some interesting wildlife in your area!

Beautiful birds Leenie! My favourite is the Loon. I associate them with Stephen King books for some reason, I think it was in one of those that I first heard of them. I didn't know what they looked like though.

Beautiful birds!
We have a little woodpecker but NOTHING like your selection!
Happy weekend!

What a wonderful series of photo ops....love the funny.

The biker chicks cracked me up. :)

I love your photos! All of them. The loon song is a lonely sound, a haunting echo across the bay, love to hear the loon. Spring comes and goes, can not make u it's mind- today it has regressed , cold and dark and of course RAIN!

I so enjoy your walks..And the cat has a just ate the bird grin! :)

lol @ the Baskin Robbins...Stripey adores them, too :)

Gorgeous captures, Leenie. We had our first feels-officially-like-Spring-day today and it felt superfine to stretch out in the sunshine and warm my old bones :)

Loved the pics and funny bits!

Great photos! I love the two junco's! The loon and eagle flight shots are fantastic!