This photo post is especially for those who haven't seen the town around BYUI for the past few months.

A campus housing boom is leveling landmarks and filling in vacant lots. 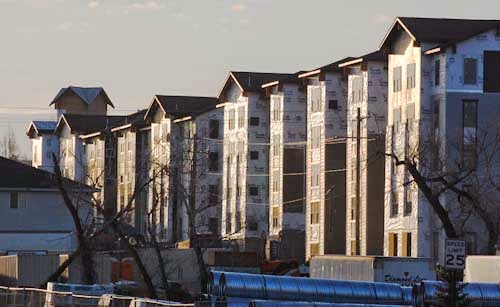 This five story building is going up between fifth and sixth south just west of campus.

Another gigantic multi-story building just north of the football field is filling up a whole block between Center and First West on Second South.  Porter Park is a block away on the left.
These are just two of the new apartment complexes going in.  Most will have parking garages.

The campus itself is building more housing for single students just off Seventh South. Plus an expansion to the Central Heating Plant has the southwest side of campus all torn up.

It's a good time to be a construction worker here but getting around town has its challenges.

Is is mostly new housing, or is some replacement? I was looking at the blocks and blocks of multi story apartments and suddenly said to myself, that's a lot of toilets flulshing!

On the one hand: jobs.

On the other hand: giant, clunky buildings.

Joanne: It is student housing. The two year college upgraded to a four year university and the town has been playing catch-up ever since. Yes, lots of toilets. New sewer pipes all over town which means streets torn up. New fire trucks with ladders that reach to five floors. But the increase amount of taxes collected has covered most of the expense.

I chuckled at Joanne's comment...but how true! I'm sure the plumbers are happy! :)

If you build it, they will come. Bringing their tax money.