RAINDROPS KEEP FALLIN' ON MY HEAD

Last night was warm enough to leave a few windows open.  Which was fine until the robins woke up well before the sun and started screaming “Get Up! Get Up!” to the whole neighborhood.

FINE! I was awake.  With one eye I looked at my Yahoo Weather app.  Temp in the fifties, wind, three mph.  Maybe I could get in a bike ride before the day hit the fan.

I was dressed and carrying my bicycle out the door before I realized the student on the University Public Radio Station I was listening to had probably phoned in the current weather conditions and most certainly had NOT looked out the window.

Big purple clouds were rolling in from the west dragging a curtain of rain.  I told myself the storm was far away and that I’d almost certainly make it back before the black weather arrived.

I almost did.  I was on the hill above town when the clouds rolled into the valley.  The first big blops of rain began to leave spots on the pavement around me and I could hear distant thunder.  Then lightning started shooting out of the sky and I realized I was alone on a high place with a metal bicycle.  It was all downhill from there.  Funny how fear can remove fatigue.

Fortunately the worst part of the weather went north and I made it to our driveway just ahead of the downpour. 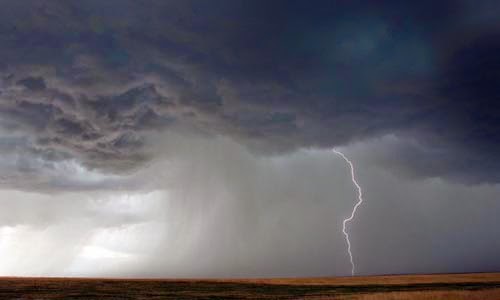 The approaching cloudburst looked a lot like this. I didn’t stop for photos. I lifted this picture from http://stormchase.net/ which has photograph after photograph of amazing weather taken by Roger and Caryn Hill.
Posted by Leenie at 12:23 PM

Probably wise not to stop for the photo op.

We have crows and blue jays on wake up call. About the same time. I just to to work early.

Wise to not mess with lightning.

If we waited for a NOT rainy day here,well, you know...

WOW!Someday I want to get a photo of lighting! That was stunningly good!

We had a downpour Friday morning at 5:00. Sounded like a flood raining down. At daylight, we found not even enough to fill the bird bath. In fact, not even deep enough for the birds to wade in. But it sounded serious.

Leenie--Your comment on Pearl's blog was hilarious. Polyester doubleknit WAS an equal-opportunity ugly-fier.

I am glad you got home safely without being zapped off your bike by a lightning bolt! I kind of miss thunder and lightning - I grew up in an area where there was plenty - but moved here in my early 20's where we get rain without the accompanying light and sound effects. On the other hand, I do NOT want to be outside when there is lightning around!