Summer weather has brought a different crop of wildflowers to the forests and meadows around the camp. 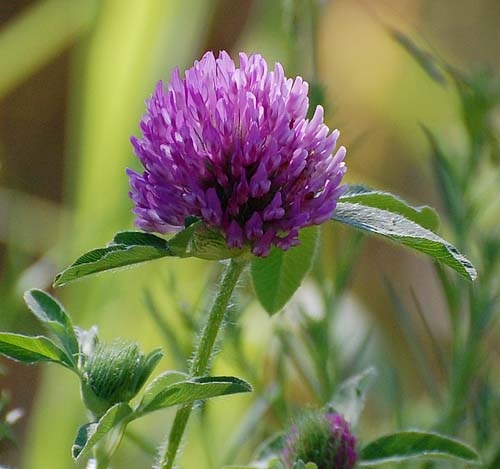 One that is often overlooked is Red Clover.  Bees seek it for making sweet honey.  Grazing animals enjoy feeding where Red Clover grows.  It is considered to be a rich source of chemicals that act like estrogens so herbalists recommend it for reducing hot flashes and for breast enhancement.  If you’ve ever seen a dairy cow that eats clover you may guess why. 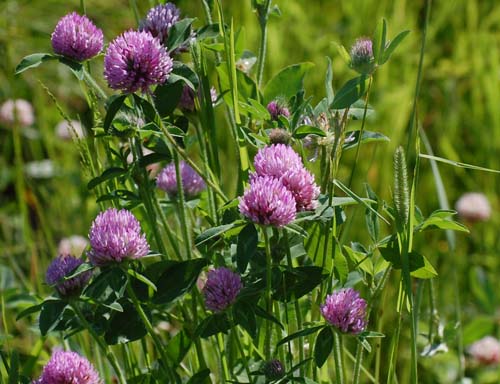 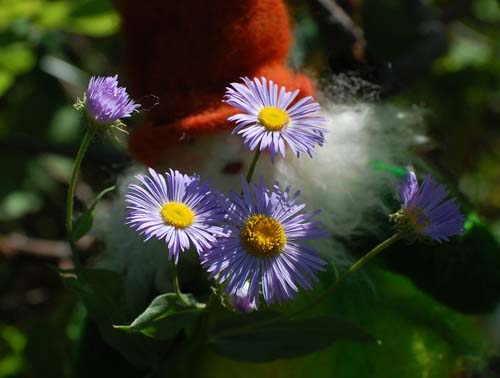 While investigating another new purple flower in our neighborhood, I saw a familiar face.  Hamish came out of the shadows to pose with the Daisy Fleabane.  Its name comes from the belief that the dried plants repel fleas. 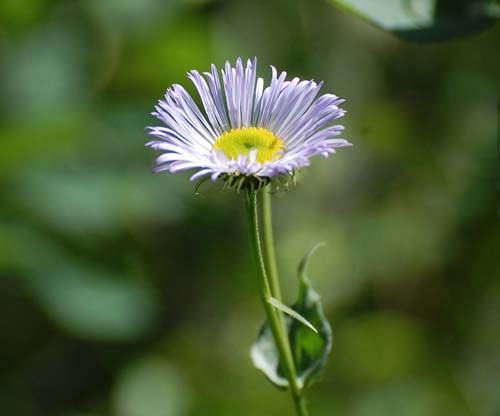 There are about 200 different species of this flower. They grow in most temperate climates.  Some are cultivated for ornamental and rock gardens but they do just fine in the wild. 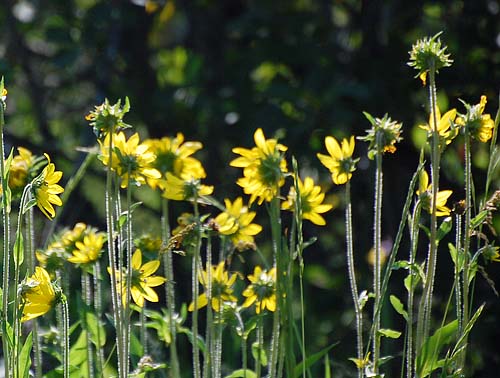 I like the way leaves and petals glow when they are backlit by the sun.  These flowers were all looking to catch the first rays of morning light and they will follow the sun on its trip across the sky.  Of course they are wild members of the Sunflower family. 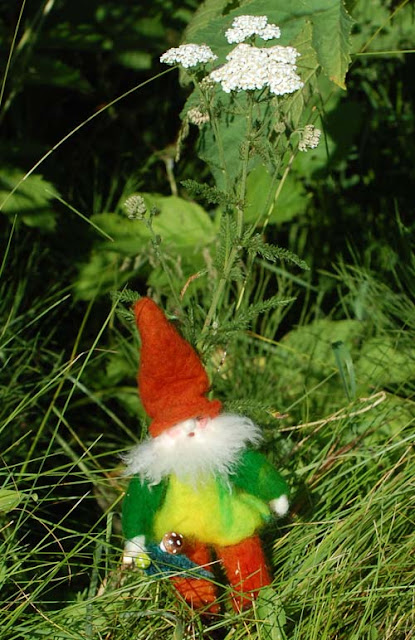 This white flower with feathery leaves and a bitter smell is one of the varieties of Yarrow.
In early times Yarrow was used to slow the flow of blood from wounds. 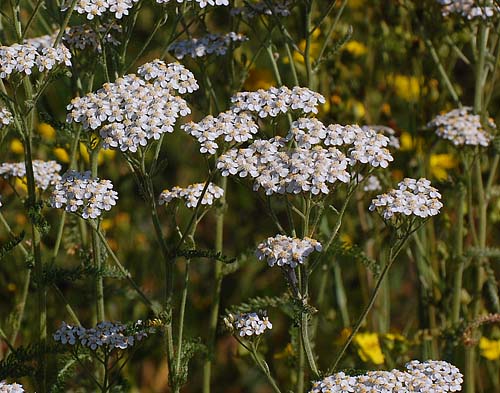 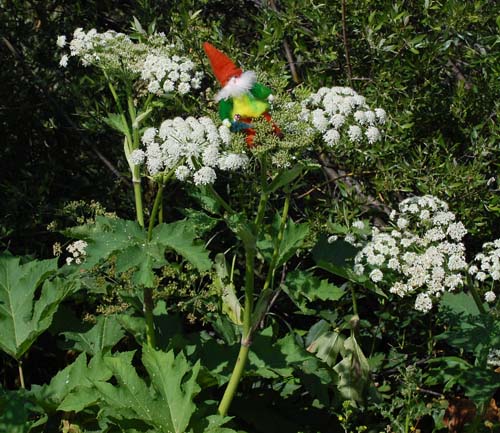 This gigantic white flower grows abundantly along the creek that borders the camp.  Early in the spring its leaves look a bit like rhubarb.  Then the huge flowers grow up around five feet tall.  One of its names is Cow Parsnip but it is also called Heracleum from “Hercules” because of its huge size.  It’s related to the carrot believe it or not. 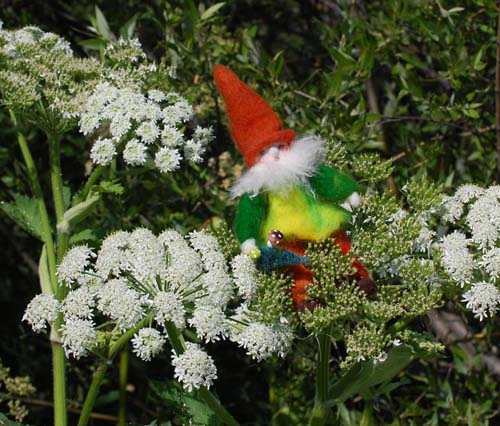 I took extra care to pose Hamish with this one since the sap from Cow Parsnip contains a photosensitive chemical that can cause a skin rash and blisters especially when skin is exposed to sun.  It’s a good thing Hamish has long sleeves and prefers darkness. 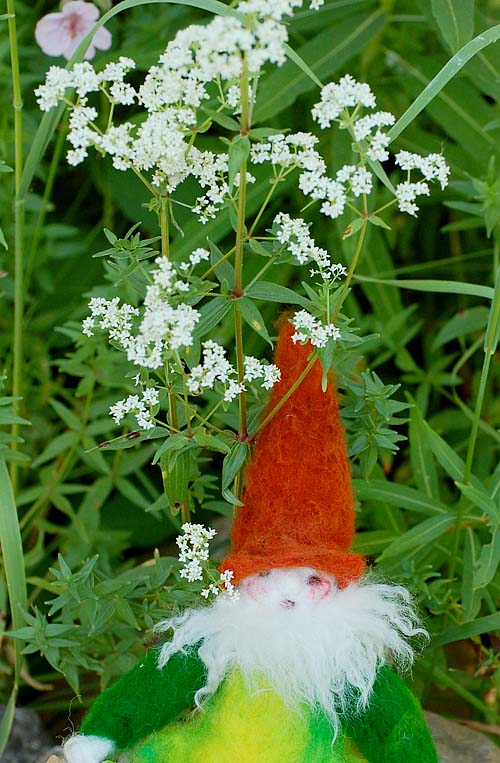 Even more dangerous is this smaller white plant which also grows in boggy places.  This is most likely the poisonous Water Hemlock. 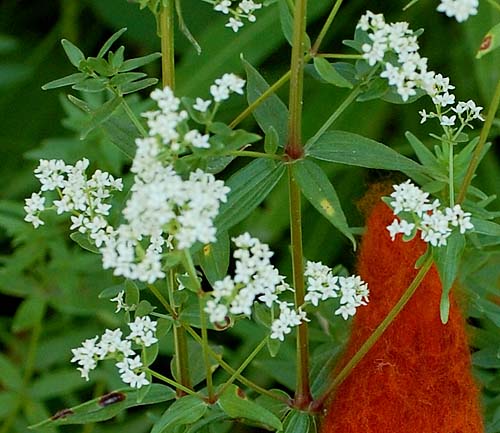 According to Wikipedia, Cicutoxin is the toxin that is produced by the Water Hemlock, making it the most poisonous plant in North America.[4] Cicutoxin is a yellowish liquid that is prevalent in the roots. It is an unsaturated alcohol that has a major impact on the central nervous system of animals.  Very small amounts of green materials of W. water hemlock, about .1% of a person’s body weight can even lead to death.[5] In addition to being extremely dangerous to humans, this plant has an enormous impact on animals.

Hamish said gnomes are immune to such toxins but was glad to point it out so we could watch for it and work to remove it from areas near camp.
Posted by Leenie at 4:23 AM

thank you for all of that information! Now I know how to effectively kill myself! So pleased that Hammish is immune and so pleased that he got to go on an adventure with you! I can not tell for sure but I think that is happiness he is expressing. Now I know why I was itchy and stinging all summer when we camped outside of Jackson hole! too late, but now I know it was not all in my head.

Thanks for the tip--next time I go grazing I'll try red clover!!

Oh, yes. Bees love the clover. They don't so much love bare feet traipsing through the clover and tromping on them, and show their displeasure by stinging the tender part of the foot sole, where the toes join on.

When I was little girl, I used to carefully pluck the individual 'buds' on a clover and eat them.
As for the Cow Parsnip---I was just reading about it the other day and saw some awful photos of a gentleman who didn't know about it and mowed a large patch of it in his flip flops, shorts and short sleeve shirt. He ended up in the hospital. I had never heard of it until then. I passed the information along to my niece, as her family has developed a love of camping and the kids run here and there (as children should when camping). Wouldn't want them to come up with strange burns and not know where it had come from.
Glad Hamish is doing well and enjoying his summer. :)