In January I put up a post about the loss of our scruffy but shady trees along the canal by our house. 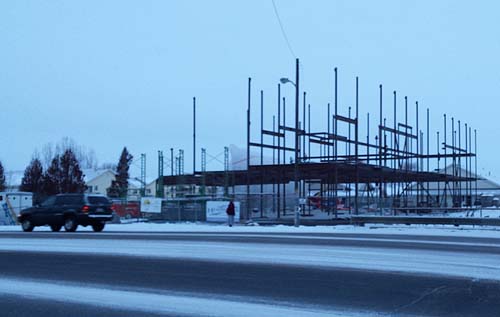 As the trees went down the girders went up for a multi-story addition to the assisted living complex nearby. 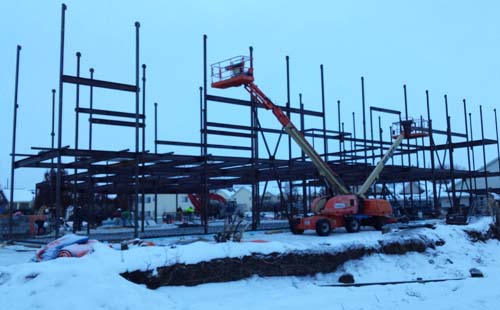 The construction workers have put in long hours assembling this big structure.  They wake us up before sunrise with banging and rumblings and are still toiling away long after dark.   It looks like a life-size K’nex Toy set at this point. 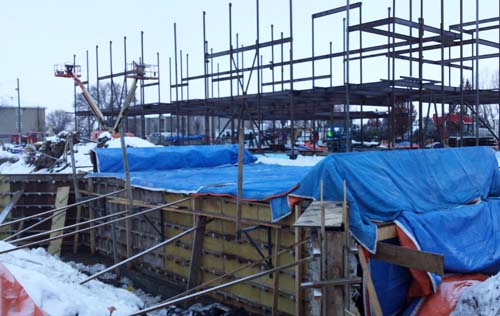 At the same time a new bridge is being built to provide access across the canal. 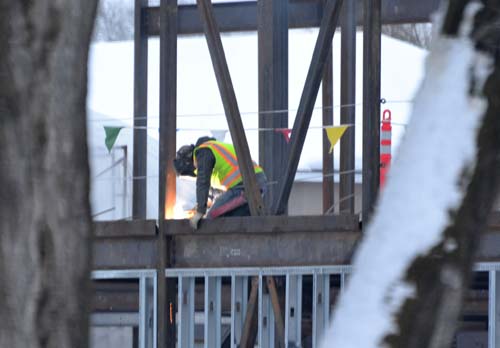 Manufacturing skills of all kinds are being put to use. 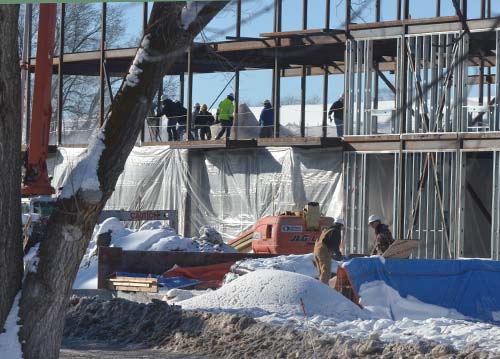 A variety of heavy equipment such as cranes, fork lifts, bull dozers, and cement mixers come and go all day. 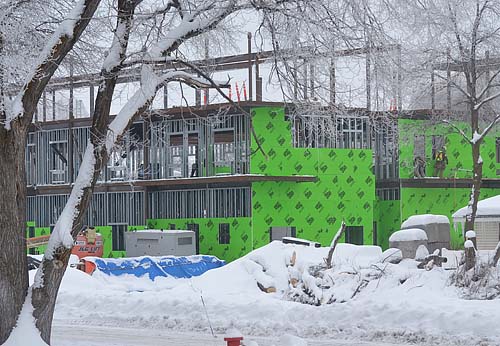 No matter what the weather the workers have been busy making this job happen.  A few weeks ago the outside walls started going up in a shocking shade of green.  We’re hoping there will be an outside layer to cover that up. 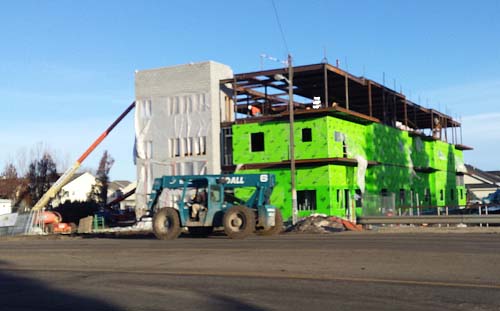 We watched three stories and an elevator shaft take shape. 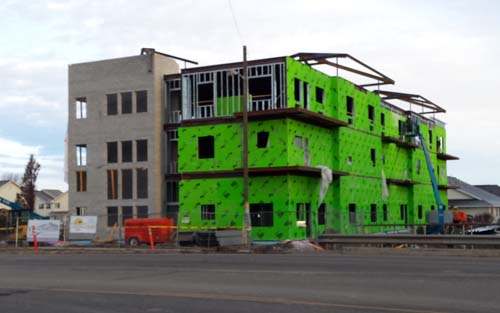 Then some kind of rooftop decks appeared.  Oh, great.  Now there will be neighbors watching from above as we come and go. 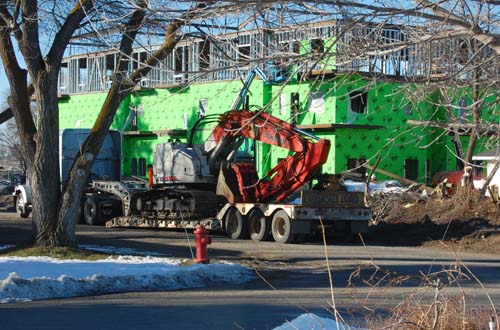 They brought in the big gear to rip out the tree stumps and move the canal over so our street could be widened.  A wider street with curb and gutter may be nice but it will also bring more traffic to our quiet neighborhood. 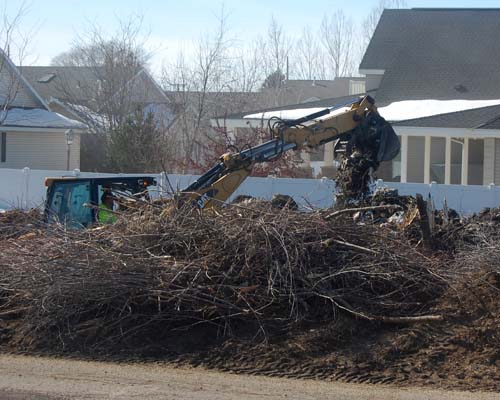 Another backhoe arrived to take on shrubbery which had overgrown the canal banks. 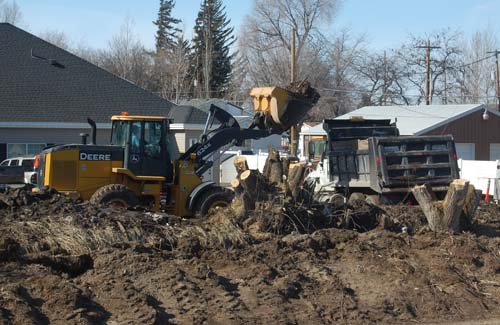 The debris was cleared and hauled off in dump trucks. 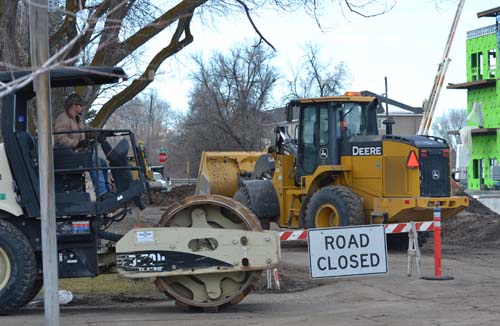 One day there were so many rigs at work that it looked like the sandbox at a daycare. 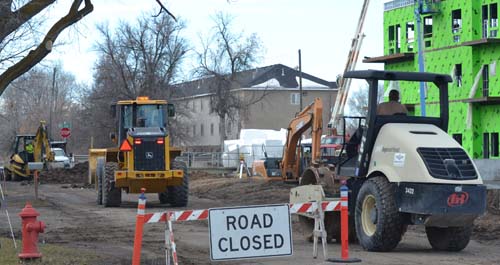 There were three backhoes in the canal, plus a front loader, dump trucks and a compactor.  There was also the beep-beep backup alarm from the crane and clanging from girders coming from the nearby building construction.  At least when this is all over the new neighbors should be very quiet. 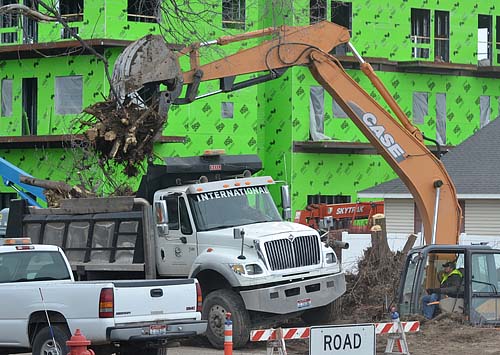 It was entertaining to watch this backhoe operator work and work to loosen and pull up the old tree stumps.  Even though there is only a city block of canal bank to clear, we are guessing they will be at it for days. 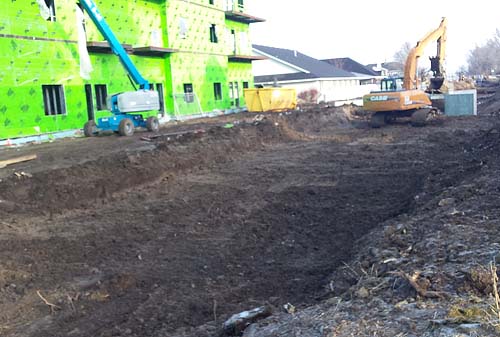 Still, it is amazing what can be accomplished by one guy in a piece of heavy equipment.
Posted by Leenie at 8:01 PM

Goodbye life as you once knew it - or to paraphrase one of my favourite kids books "and when they noticed the world around them had changed, it has changed so much" (Four Puppies)!!!!

It is amazing. I love watching man and machine work. Great shots and of course the commentary. Hug B

Good heavens! I've only been gone for two weeks and the crazy keeps getting crazier!

I so agree with Jeanie...she said how I thought well.

I'm sure they'll cover it up. But at least for now, they've replaced the greenery with green...

Those guys with their heavy equipment...it's like playing in a sand box for them I guess! (My brother in law does that) I'm always amazed at how they can start a project like that and have it all come together, down to the very last inch. I guess that's what engineers are for! I'm glad it will be quiet neighbors for you, rather than a shopping mall.