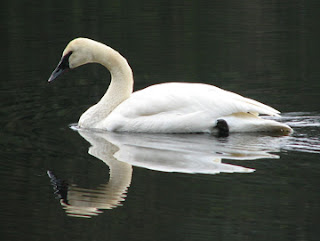 This morning my walk took me past a pond where wild ducks congregate. Lately they have been joined by noisy migrating Canada Geese. Today the quacking and honking also included the sound of a French horn. The big trumpeter swans are making their way south and a group had spent the night on the pond. Trumpeters are HUGE birds. I met one face-to-face through a fence at a zoo and he could look me square in the eye. I am short, but a five foot bird with a seven-to-nine foot wingspan is an impressive creature. In fact they are considered the largest waterfowl species on earth.

I take an afternoon once or twice a month in December and January to make the hour’s drive to see the flocks that winter on a river north of here. A few years ago they were few and far between. But in the past ten years the efforts of Fish and Wildlife people have been very successful in improving the population. They are still protected from hunting. The farmers don’t like them because their enormous webbed feet can carry disease and pests from the standing water in one field to another. I just think they are one of the most beautiful creations on earth. The trumpeter swans and the Grand Tetons make this a great place to call home.
Posted by Leenie at 12:09 PM

Oh how pretty! The golf course is full of geese right now, I dont know how the golfers walk around in the middle of them all. Whenever we go outside we can hear them honking overhead. We are hoping its a nice weekend too so we can get rid of the bags and bags of leaves the willow has left us.

very cool I love swans lucky you get to see them.