When I came home from work DH was not ensconced in his Lazy Boy chair in front of his big screen TV.  He was working on his laptop in the living room.  He asked me to do him a favor.  Would I go down and see what was making the flappy noise inside the empty wood stove, please?  You may remember why this was a problem from FEAR OF FLYING –THINGS part 4     and 5. 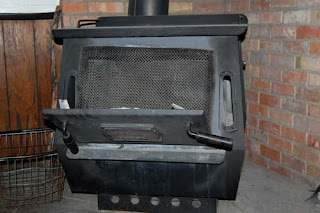 I carefully opened the door of the stove and saw nothing unusual.  But, just in case a bird had fallen down the chimney, AGAIN and was hiding in the stove pipe, I put the screen over the door and left.
Not much time passed before there was a yell from the basement.  Beavis had taken up residence in the lounge chair and had been buzzed by a bat that had, indeed, been in the stove and had found its way into the room.
We cornered it in the laundry room (a place of which I never, ever planned to post photographs).
The little flying mouse 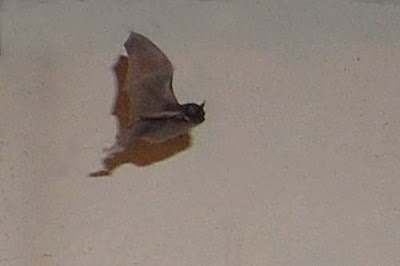 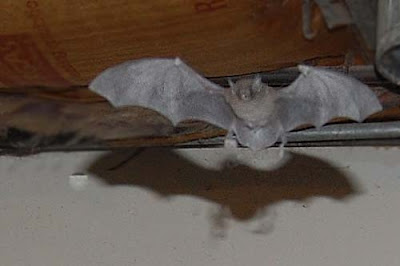 and around the laundry room. 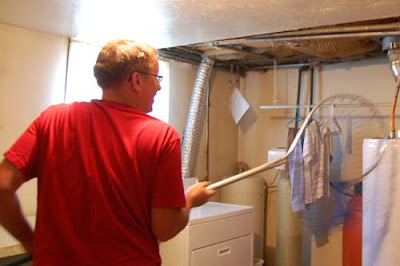 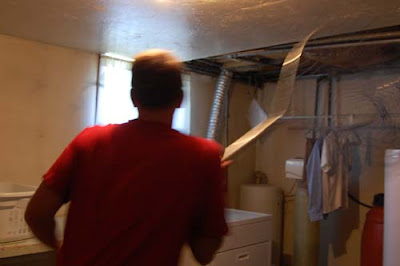 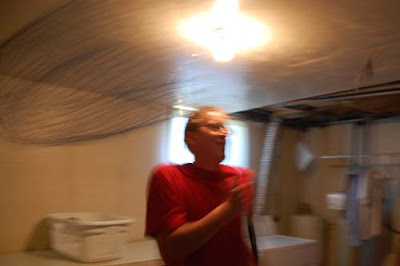 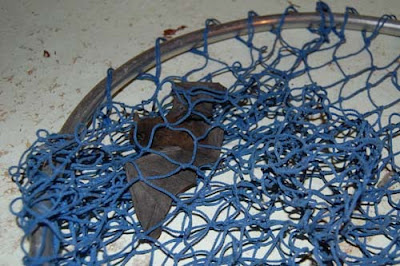 I know most people are freaked out by bats.
But they are marvelous creatures that eat copious amounts of biting insects. 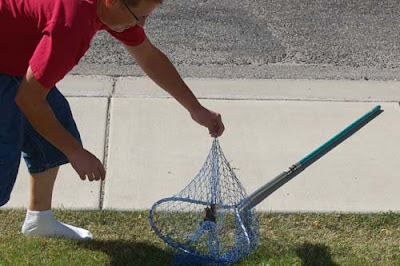 The release into the wild did not go well.  The bat had become entangled in the net. 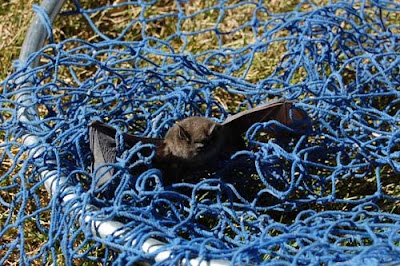 The net was wrapped around one wing and the bat was doing its best to chew itself free. 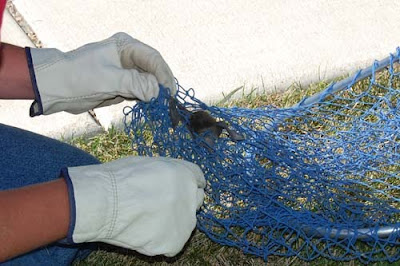 Beavis got gloves and soon 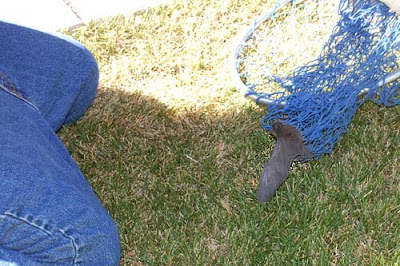 our visitor was liberated.
Posted by Leenie at 9:31 PM

I love bats, too. I love watching them fly about in the dusk. A friend of mine was over one night and we were settling in for a bonfire when she spotted something fluttering around in the dusk. She said, "Oh, look! A bird is going crazy flying around and it's nearly dark." I said, "Oh, that's a bat!" I never saw anyone fly out of a chair so fast in my life - lol! We finally convinced her that she was safe from attack. Poor bats get such a bad rap!

I am glad the bat found freedom in the end. He-or she-looks really cute! I was surprised to see bats in our garden in the summer-I was out there late at night looking for the cat and saw two swooping around.
In answer to your question a while ago-I draw over the photos on a separate layer and then remove the photo.

I think they are fantastic!! Lol))-reminds me of the Munsters! I find them intriguing and totally agree- they have many good qualities (wonder if they'd enjoy tree frogs? Ha ha..what a quaint looking stove too! I'm coming back in the morning to read another post I saw through your link:)

Hooray for rescuing your little flying wonder!
I do love that they eat so many insects. So cool, but so many people are afraid of them.

Okay, okay, I know they're our friends and all, but . . . . EEEEEEKKKKKK!!! (Usually this is the kind of thing that happens at our house when my husband is out of town.)

Whew- poor little confused bat - at least he got lost at the right house! Thanks you for letting him go, from all of us bats and his little family...thank you.

Great photos and a happy story. I don't think I would have been brave enough to take pictures with it flying around me in the house. Funny, isn't it! Rhinos, crocodiles etc. no problem, but the idea of a bat in my hair freaks me out.

That would have been the absolutely thrill of my little girl's life. She adores bats.

Some years ago, I discovered a little bat clining to the wallpaper in the bedroom .....as always when there was a crisis, Malcolm was working away from home!! I managed to get advice from someone on the phone (bats are protected in the UK) but when I wnet back to the bedroom it was gone - I looked under the bed and in all the corners just in case it popped out in the middle if the night and attacked me!!

I sponsored a little bat for a long time at a bat rescue establishment in the U.S. Meanwhile I found out we have bats galore here in Australia and many in pest proportions. Still think they are special little creatures though.Enjoyed your photos!

Yikes!
What a tale. I like bats when they fly around eating mostquitos but NOT inside.
This week we have had visits from 'Mousie" or maybe several of the same --
one got in a brown paper bag so could be dumped quite easily.
Buster is no help at all!