LATE TO THE PARTY, LATE WITH THE NEWS 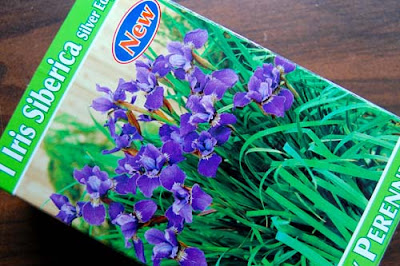 I know, I know.  The Northern Rockies are probably
just behind Alaska when it comes to getting warm weather.
But we've had a few hours of sunny warmness in the
past few days so I finally planted the Siberian Iris bulbs I bought a month ago. 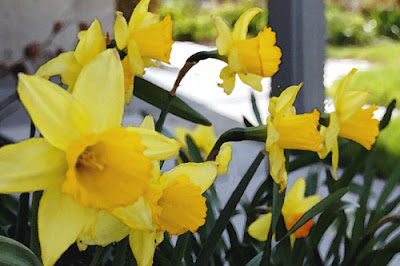 Our daffys are finally in bloom. 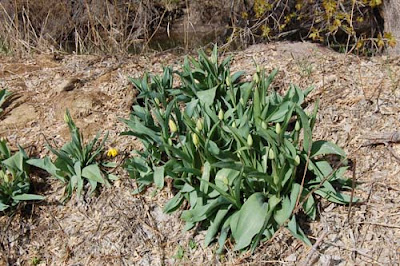 The tulips I planted along the canal bank should be in bloom
just in time for Mother's Day again.
Unfinished Business
Our local paper only comes out three times a week.  The story that went with the photo of the cougar up the "power poll" (see previous post) was  published online.  Sad news for the big cat.  It was shot not long after the picture was taken and left for dead.  Shooting a lion is illegal and out of season.  Fish and Game Officers are investigating.  They said many human foot tracks were left in the snow where the lion was found and they know what kind of gun was used to shoot it.
Both gray wolves and lions help themselves to livestock when they are hungry.  Farmers sometimes defend their investments even when the predator is protected.  The shooter also may have been concerned for family and pets or just looking for bragging rights.
Posted by Leenie at 7:29 PM

Survived being electrocuted only to be shot, and the cougar looks so proud of itself! Sad...but your flowers cheered me up Leenie!

I was brought up to think that all animals have equal rights to be in this world and therefore I am totally against shooting. But now that I have hens when there are foxes about I have mixed feelings. Our local gamekeepers occasionally shoot beautiful raptors - than makes me sad as most of them take dead birds and rabbits anyway. Really we have little right to shoot - but one has to keep one's livestock safe - it is a thorny problem.

We've had snow here in May... but thank goodness for daffodils!

Leenie well the lion I have conflicting thoughts so will not voice them. I have bulbs that I have not planted since getting them last year, I am bad. Yours look lovely. B

Tempura bananas are exactly the kind of raw-fish sushi I would choose, as well! We have excellent taste. But I might have started with your husband's burger (and still had the dessert...)

Your blog always cheers me up because you and I live in the same meteorological world, which is sometimes unfortunate for both of us but misery loves company. Glad to see you'll have flowers for mother's day!

Your flowers are wonderful. I am sorry about the Mountain Lion, I hate having wild animals destroyed because of us.

I'm glad you're finally getting a little green. Daffodils are always so cheerful.
Really too bad about the lion. I know they can be hard on ranchers, but it still makes me sad. Like shooting fish in a barrel. Not sportsman-like in any way.

Wishing you warmth up there!
Actually, still sweater weather here!

Well flowers are exciting..your selection looks great! I can't believe the shot of the poor Cougar on the pole below!! Well, I don't know what to say..hopefully not looking for bragging?
Few hours of sunny warmness (lol)..the humidity is hanging over my head like a hot flash-
heh heh:)

I hate to hear that the lion was shot!

I'm glad you have sunny daffodils to cheer you after the sad lion news. When we hunt predators, everything else goes out of whack (that's the scientific term for it, right? Out of whack!). We are overrun with deer here because all the wolves and lots of the mountain lions have been decimated.

Poor thing was a sitting duck.

The iris look like they'll be beauties. Everything here is very delayed this year. Just been too cool both day and night. Our forsythia bloomed and it's usually the first cheery color in the gardens.