AM I THE ONLY ONE WHO'S THOUGHT OF THIS?

I avoid political stuff on this blog, but I think I've got a way to solve some problems caused by our friends in Washington D.C. and it's so simple it will never happen.

At the same time our is congress trying to find a way to please everybody, win votes and pretend we aren't hopelessly up to our ceiling in debt; our Federal Reserve continues to make and stash U.S. dollars nobody wants.  And even though the neglected mountain of money recently grew past the $1 billion mark, the U.S. Mint will keep making more and more of the coins under a congressional mandate. 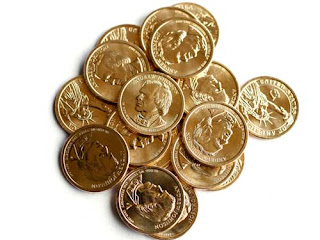 One strange twist to the story was that some people have been using the Mint's dollar coin mail order program to get free frequent flyer miles. Tim Brooks just got back from a trip to Hawaii, all on miles, thanks in part, to the U.S. Mint.

Anyway, I was just wondering why all those dollars couldn't be used to pay some of the money they owe to U.S. citizens in things like the congressmen's own paychecks, welfare, medicare, social security.  Agreed, a billion dollars wouldn't last more than a day in this capacity, but at least it would be a way to get all those pretty little dollars out of the Federal Vault where they could be spent.  And, just another thought, the U.S. Post Office could be used ship those dollars which would be giving a boost to another government program circling the drain.  It sounds like a win, win, win to me!
Posted by Leenie at 5:04 AM

i am ashamed to say i know nothing. i watch very little t.v., i only watch show's that have been recorded so i don't have to watch commercials. i don't read the news paper. i blog, i craft, i garden, i scrapbook, i clean and i bake.

i have a terrible attitude towards politic's. if i go somewhere and people are talking politic's, i add nothing.

my mentallity is "spend less then you make, so you always have money in savings". i would never give anyone (any country) money i don't have. they spend my tax dollars and never ever ask me if i like how they are spending it. soooo i stay away from that depressing stuff!! wrong, i know, but that's the truth!!

I knew the world had gone mad. Now this is confirmation.

I don't know, I just don't know -I think that they need a mom in the house- who controls the purse strings and knows how to make a potato dinner appetizing for 5 cents a serving...Ridiculousness of charging the military 75,000.00 for a 25 cent screw...ACH!

The thing that upsets me with government is that if we ran our homes the way they run their offices, we'd be out on the streets in a heartbeat. I had no idea that all that money was sitting around. You're right - it's right there and being totally ignored and underutilized except for air miles rewards? That's nuts!

I thought our government could do better, but following the news of your lot's latest performance, our lot are brilliant!
What a clever way to earn frequent flier miles!!

So where can I get me some of those coins that come with a free trip? B

leenie....you called me a photographer, no one has ever called me that. that comment made me feel so special!! i am just a little girl who takes pictures!!

The whole budget crisis thing has my mind spinning. How can you balance a budget that has the word "trillion" in it?
Like you, I know there's got to be money just laying around, but isn't thought of as being able to put a real dent in the overall budget---so it's ignored.

I am on a news blackout again..it all makes me ill..but I enjoyed your post..awesome way to solve a problem:)