Every now and then some of our children and one of their spouses get together with a bunch of like-minded weirdos to swim, bike and run in circles for hours.  I know!  I promise I didn’t drop them on their heads, and we tried to teach them a little common sense, but there you go.

This time Bobert challenged his wife, Greasy Lightning and his brother, Beavis to compete in a half ironman event in Utah.  This means swimming for 1.2 miles, biking for 56 and then, and THEN, running for 13.1 miles. They’ve been training since January and August 22 was the big day.

DH and I went along to act as cheering section and photographers.   To make our job extra difficult, they all dressed in black with red caps. 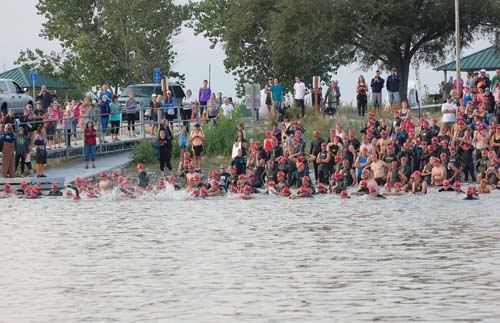 Not just our kids, NO---EVERYBODY in the swimming part of race dressed in black with red caps.  This makes Find Waldo seem like a piece of cake.  By the way, all three of them are in this photo.  I found them.  Trust me. 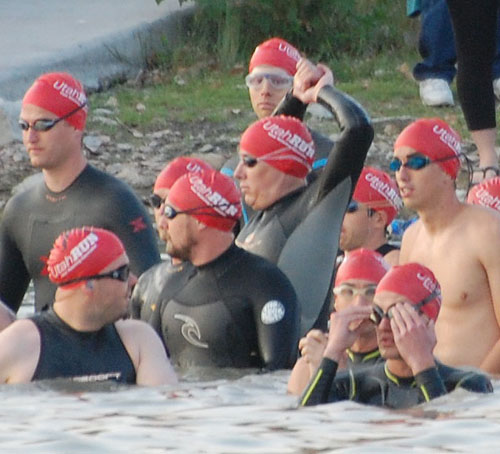 Here’s a hint.  The one in the water with his hands raised is Beavis. 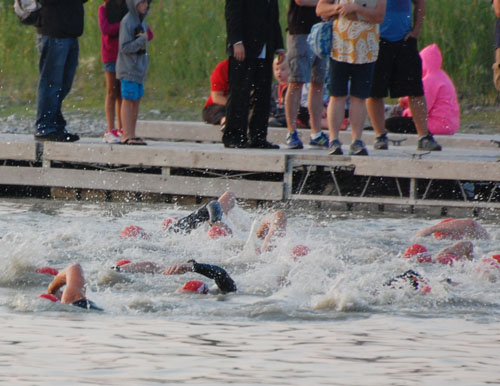 They took off swimming by age group and gender, stirring the swampy water of Utah Lake into a froth. 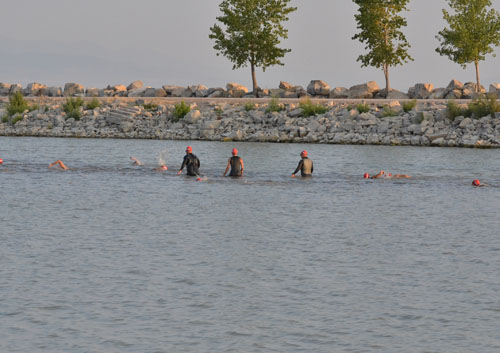 At the middle of the swim the water became a bog and then a shallow quagmire.  A lot of the racers gave up swimming and waded.  Everyone agreed this was the most gross triathlon swim in their experience. 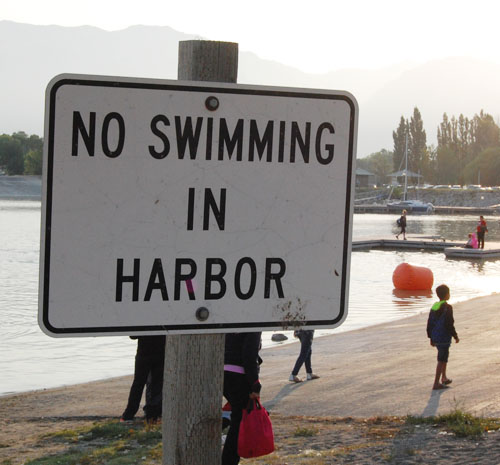 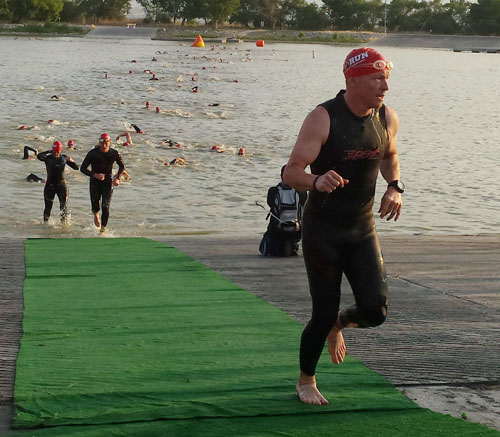 Still our champions completed the ordeal… 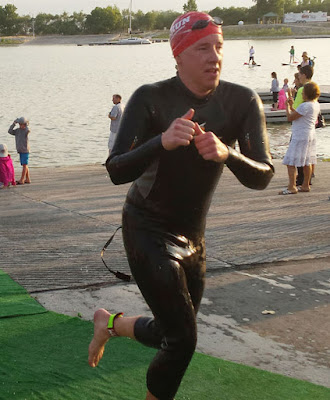 …and hurried off to their bikes. 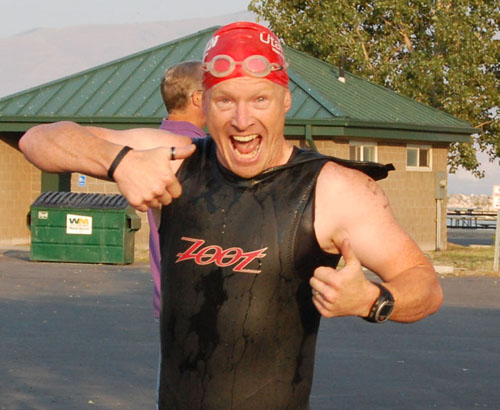 With a goofy face for the camera pause. 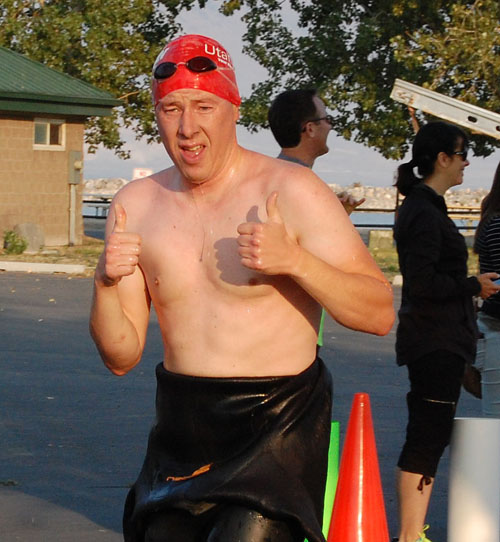 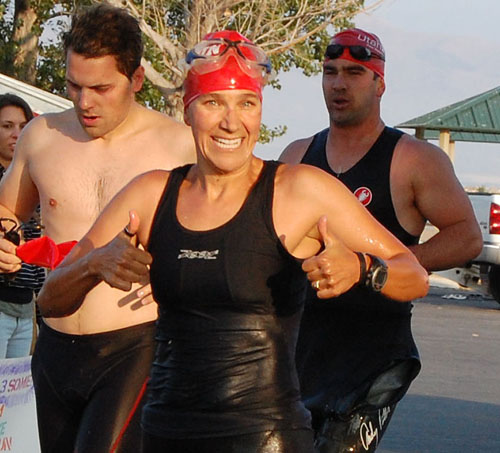 Can you say, “Eeew. That water was revolting,” with a grin? 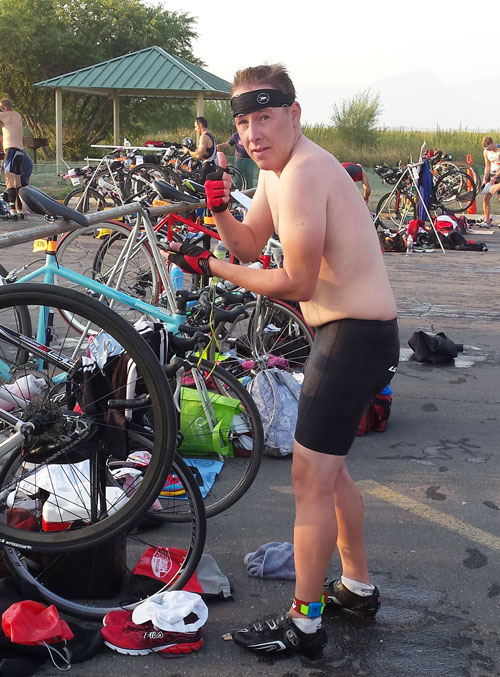 In a matter of a few seconds they transitioned to bike gear. 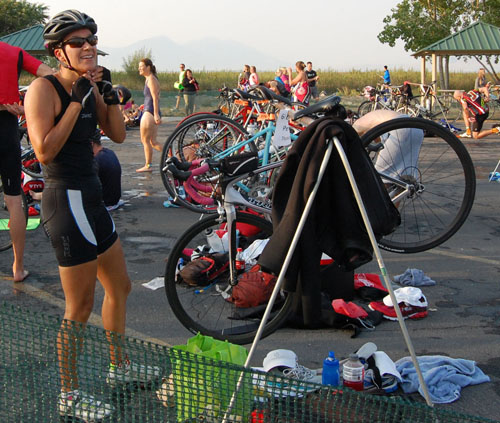 And were ready to ride.  Bobert was long gone before either DH or I could make it to the bicycle area. 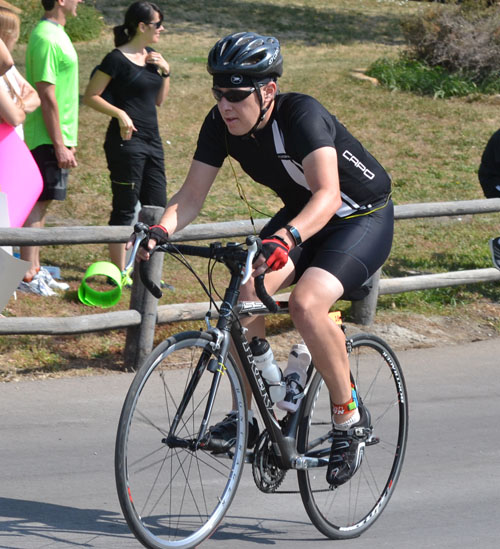 Beavis left right behind him, but was the first one to come back from the 56 mile ride
. 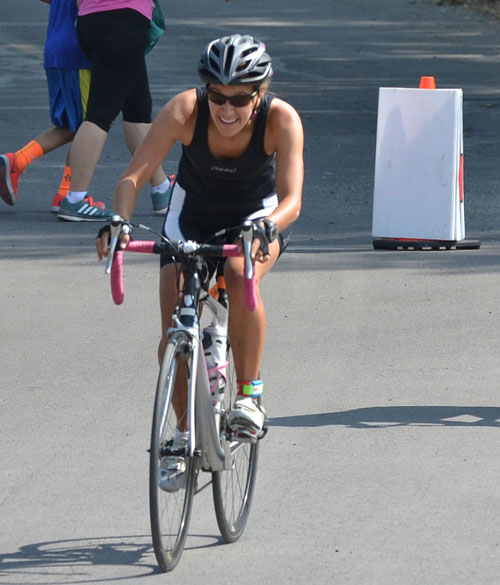 Then Greasy Lightning shot by to change into her running shoes. 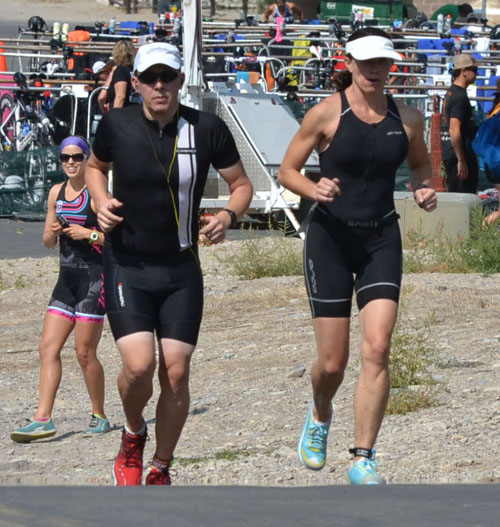 When Beavis ran by I yelled, “Where’s Bobert?”  The answer.  “He had three flat tires.” 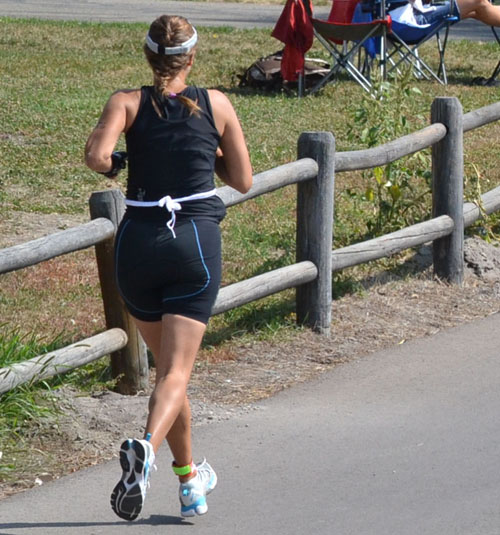 Greasy Lightning hurried by, but still no Bobert on a bike. 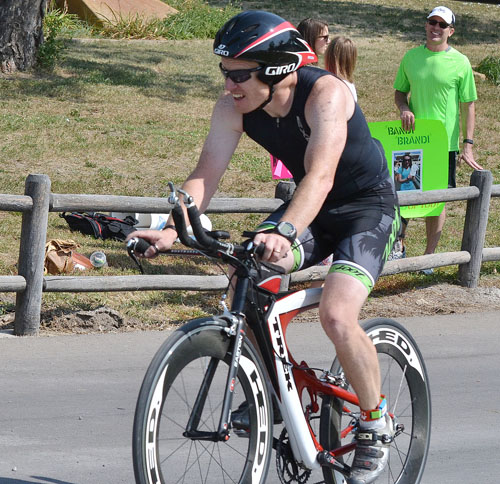 Finally he rode by on his way to the transition area. 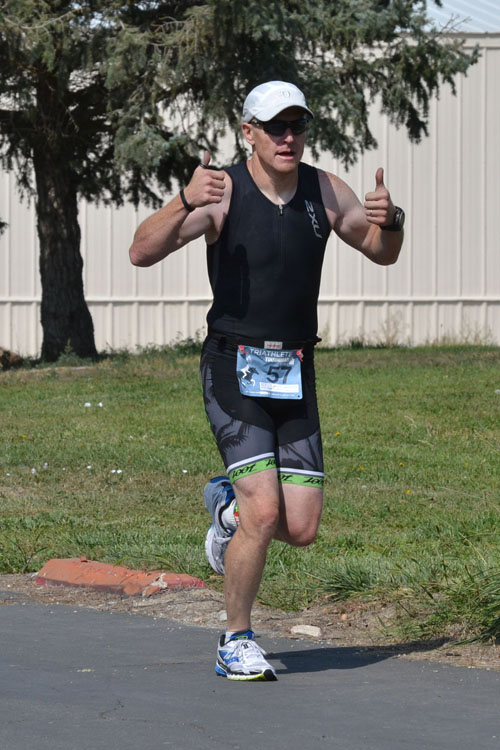 In spite of the misfortunes with his bike, he still ran by with thumbs up.  “I’m just gonna finish.” 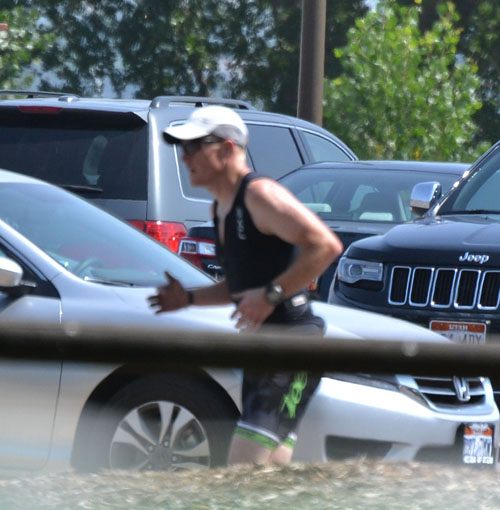 The run was two six and a half mile laps in what was becoming a very hot afternoon.  Even with two thirds of the grueling race under his belt, Bobert pushed through to make up lost time. 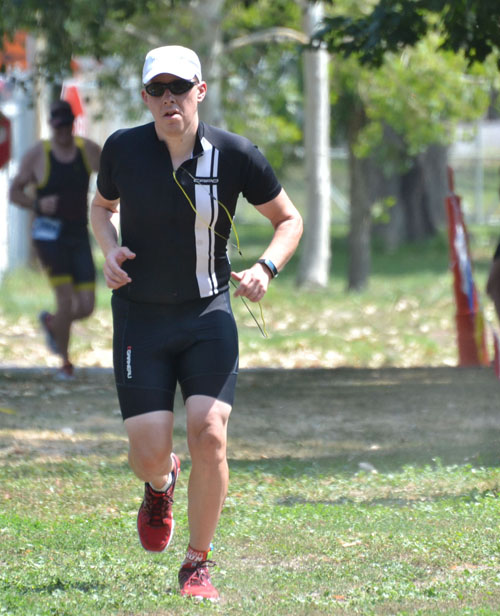 But he couldn’t catch up with Beavis who did the whole 70.3 mile distance in just a little over five hours. 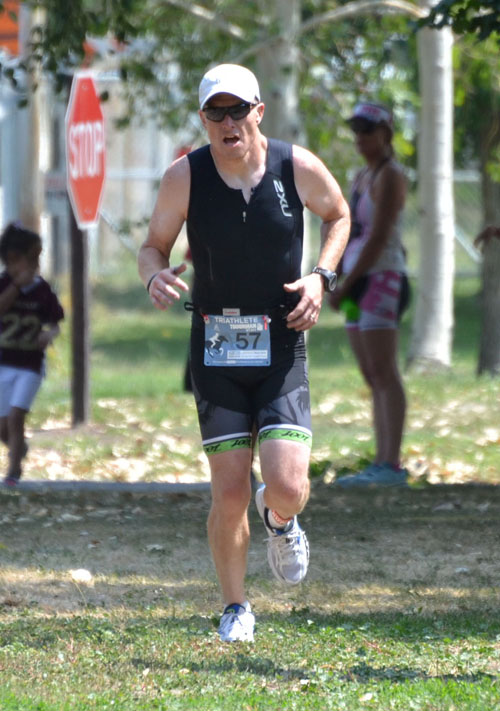 Bobert came in not long after. 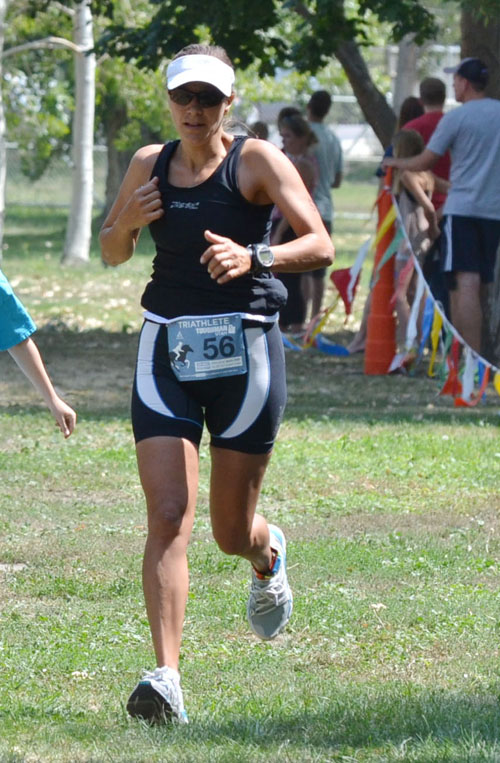 Greasy Lightning was slowed down by an injury to her right shoulder she got in a bike wreck earlier in the month. 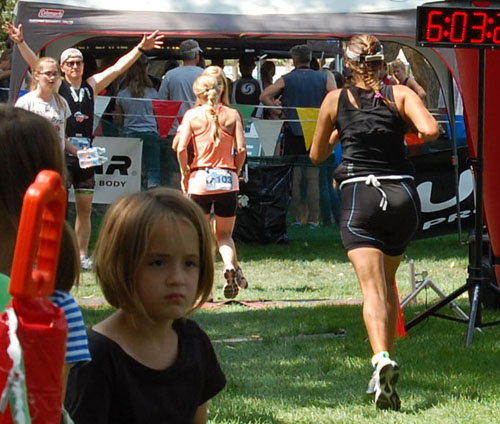 Still, she finished in just over six hours.  Bobert was waiting for her at the finish line with open arms. 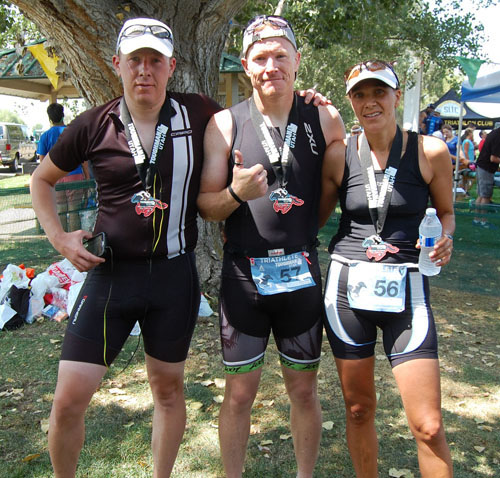 We’re SO proud of their accomplishments.  But we still think they’re weird.
Posted by Leenie at 2:40 PM

My thighs got chaffed just reading this.

Congratulations to the 3!
The whole "wearing something wet on a bike ride" puts me right off the whole idea. As Joeh says--...thighs chaffed....
I'm assuming other parts get chaffed too.

Wow. And that's only HALF an iron man?