THUNDER AND LIGHTNING FROM THE PORCH 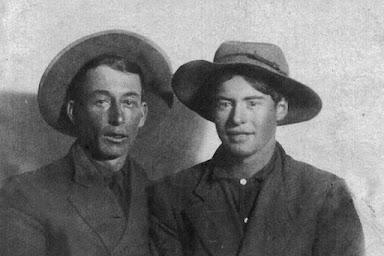 John (S) Cooper --a.k.a. Jack (on the left-Loal Hendricks on the right), was a “teamster.” This meant he could handle six big horses as they pulled a heavy wagon over dirt roads for many miles. The job took him to Twin Falls, Idaho where he hauled freight for his future father-in-law, Juel Hendricks. Hendricks was using his teams and wagons to bring freight to Twin Falls from Shoshone where the Union Pacific Railroad made a stop.
Two of Hendricks’ sons, Loal and William (better known as Ace), also drove teams. The wagons were loaded at the train station in Shoshone and traveled the thirty miles south to the city of Twin Falls, Idaho which is built near the edge of the vertical canyon of the Snake River. The only way to cross at that time was by a single lane track that switch-backed down the side of the canyon wall. 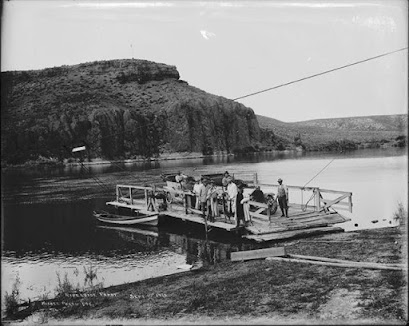 The road then crossed the canyon floor to a ferry on the river.
When Jack and his friends' wagons reached the bottom of the canyon they would race to see who could get to the ferry for the first ride across. Once across the river they drove their wagons up a narrow dug-way that was built into the lava rock walls of the south side.
It took them all day to go from Shoshone, then down into the canyon to cross the Snake River by ferry. When they were finally on the south side of the river they camped for the night.  The next day they traveled the last few miles up the other side and into the town of Twin Falls.

According to Jack’s son, Lindell, (my dad) at one point the south side road passed under the waterfall of the Perrine Coulee which dropped over the rim. 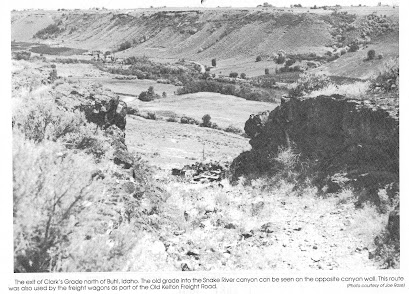 I found this photo of a freight road going down into the canyon to a ferry which crossed the river but this one was farther downriver toward Buhl and connected the Boise area to a stop on the Transcontinental Railroad at Kelton, Utah.
If the road passed under Perrine Coulee it had to be near there. I remember my dad, taking me down into the canyon to the Blue Lakes Ranch where we crossed the river and went to the south side of the canyon to see the waterfall as it dropped over the canyon rim.
I checked Google Street View. Those guys go everywhere! 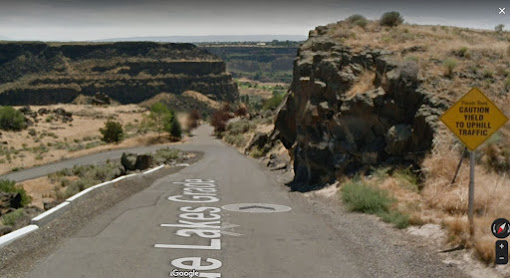 The road, now called the Blue Lakes Grade, is still very narrow but at least it is paved. The sign on the right says, “Caution, yield to uphill traffic.” Note how deep and steep this part of the canyon is and now imagine driving it in a loaded wooden freight wagon behind six big horses on a road which at that time would have been just be a rocky trail. 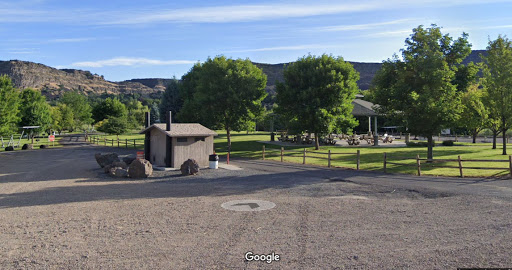 At the bottom of the canyon is a campground. But I don’t think Jack, Loal and Ace had picnic tables and a bathroom when they stayed in this area overnight. 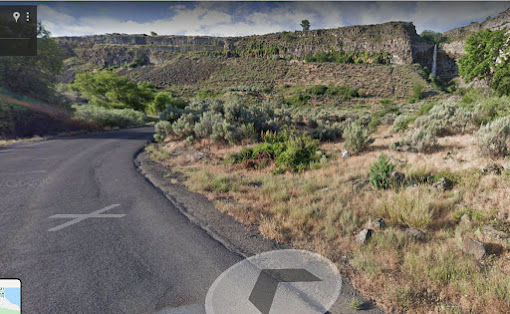 Now a bridge takes traffic across the river where the road starts the steep climb up the south side. The Perrine Coulee Waterfall can be seen on the upper right of this photo.

More switchbacks and now the Perrine Bridge can be seen a few miles upriver to the east. The bridge was built in 1927 and was the way my family reached the city of Twin Falls where we traveled for shopping from our farm in Dietrich, Idaho. This bridge was replaced in 1976 by a four-lane bridge. 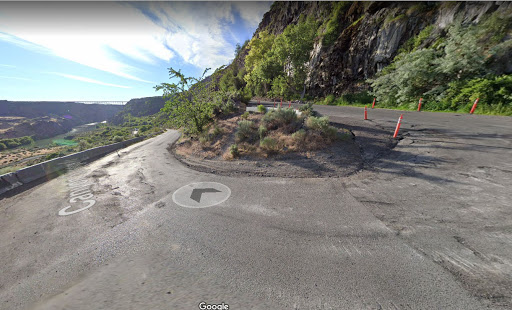 Talk about hairpin turns! Even the Google Street View people must have had second thoughts. 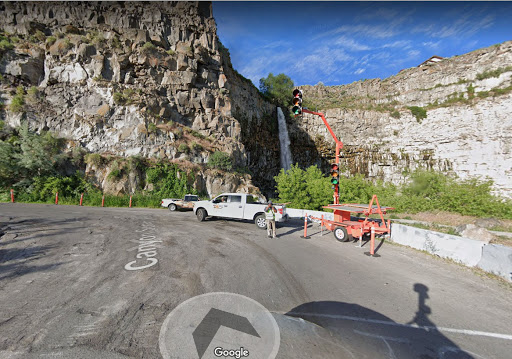 This road doesn’t go right under the falls and I think the water has eroded the canyon back some since Jack drove the canyon in his freight wagon. 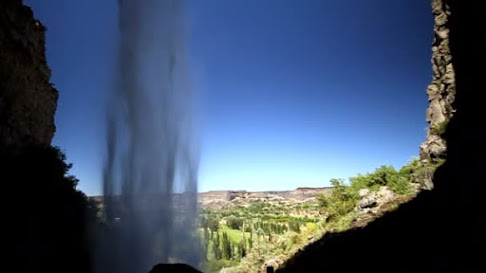 But there is a hiking trail which can be taken to a view under the falls.
The road takes a traveler up the vertical rock canyon wall to the rim which is a few miles from the city of Twin Falls, Idaho. 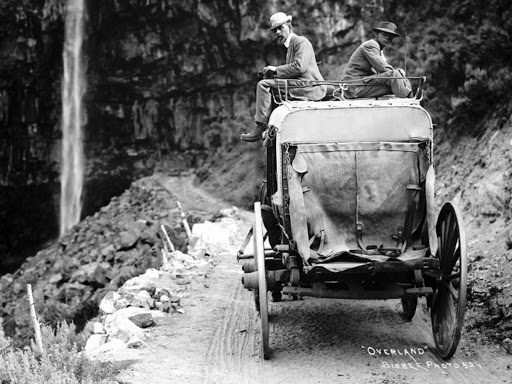 Here’s a photo I found of a stage coach stopped near the waterfall. Our pioneer ancestors knew how to travel in style.
Posted by Leenie at 7:07 PM 1 comments

NaPoWriMo PROMPT: Our final (optional) prompt! In some past years, I’ve challenged you to write a poem of farewell for our thirtieth day, but this year, I’d like to challenge you to write a poem about something that returns. For, just as the swallows come back to Capistrano each year, NaPoWriMo will ride again!

After an unfortunate haircut
I took solace in realizing
My hair would return.
And there is comfort in knowing
The months of snow will go,
The days of will rain end,
The mud will dry,
The screeching birds
Outside my window
When I want to sleep
Will finally take a break.
But
What if, like my Barbie’s hair,
They didn’t come back?