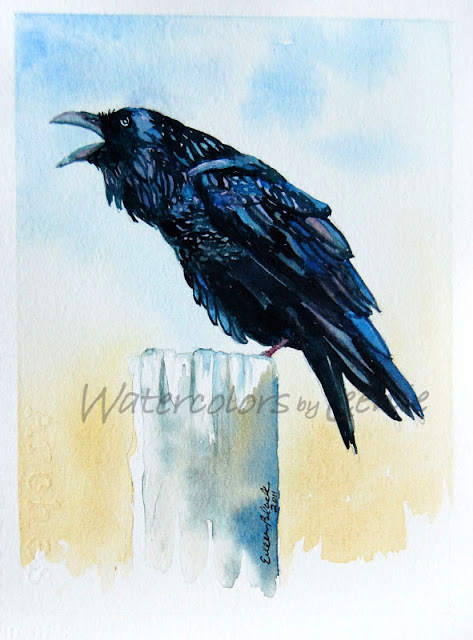 Crows and ravens----big black birds; considered symbols of life, death, wisdom and evil---they are judged as both intelligent and unsavory. 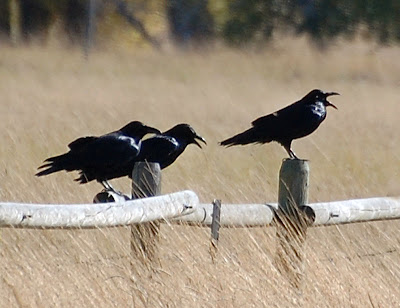 While in last month I took some photos of some very large birds I thought were probably ravens. I don’t profess to be a bird expert and was curious about ways to tell the difference between ravens and crows.

Here’s what I gathered from several sources on the internet:  Both are members of the same family, (Corvus) which includes jays and magpies. 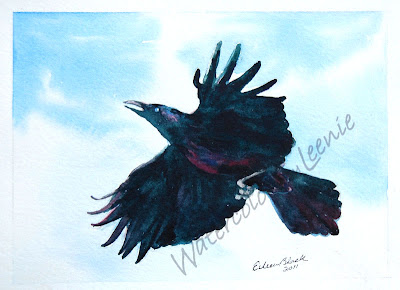 Ravens are the largest with a body size close to that of a house cat and with a wing span of around three and a half to four feet.  They have shaggy throat feathers and a large curved bill.  Their tails have a wedge or diamond profile and they have more pointed wings with long finger shaped feathers.  The raven’s most common call is a deep croaking or “cronk-cronk” sound. 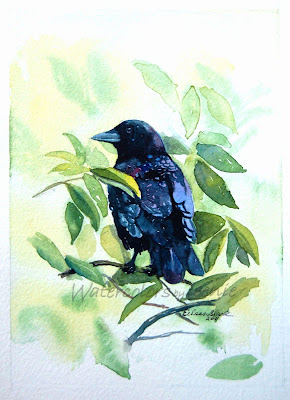 American crows are closer to the body size of a squirrel with a wing span of around two and a half feet.  They make the familiar “caw-caw” sound but I’ve also heard them talk to each other with rattles, clicks and even bell-like notes. 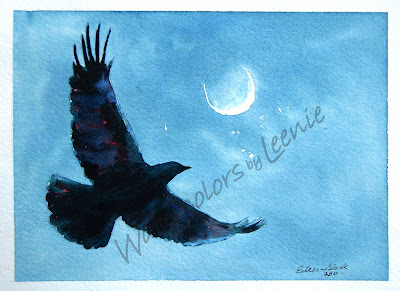 Crows have more blunt and splayed wing tips and a fan shaped tail.  Their bill is flatter without the tuft of hairs seen on a raven. 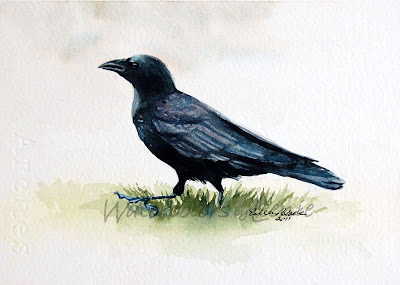 Both are recognized as being some of the most intelligent of birds.  They’ve been seen making tools out of sticks, dropping nuts on pavement to break them and playing pranks on dogs.  They are scavengers and can find food even in the harshest conditions such as the dead of winter in .  Ravens have been seen following wild wolf packs to a kill; some stories even have ravens flying ahead of the wolves to lead them to prey. 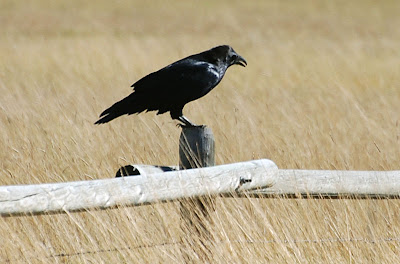 The Norse god Odin was said to be attended by two ravens named Hugin and Munin who would fly about the world and return to perch on his shoulders and whisper gossip in his ears.  Inuit stories say the god Raven made all things, creating light out of mica flakes and humans out of rock. 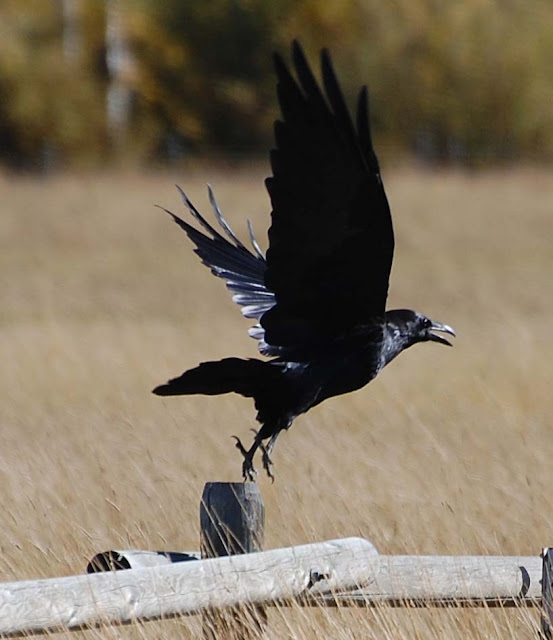 Native Americans have many legends about crows and ravens as both creators and tricksters.

For my post about an encounter between a crow and a squirrel at our place,
"Drama in the Yard", click here.

The illustrations are my watercolors.  They are for sale on my Etsy site.
Click on the link or on the red icon, upper left on this page.
Posted by Leenie at 1:51 PM 17 comments

Even though my clock says it’s morning,
the sun is slow to get up when the temperature is
so cold exposed skin feels like it’s been plunged in ice water. 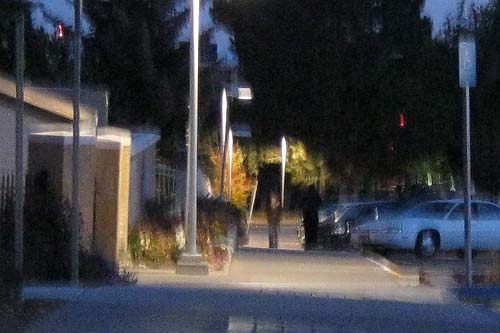 A hike across campus is a little spooky in all this dark. 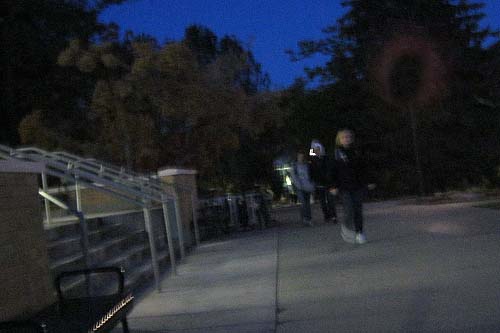 Almost out of nowhere shadowy figures began walking toward me. 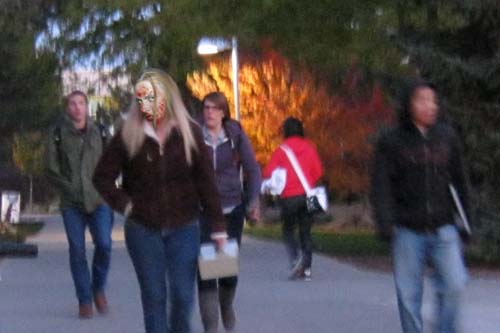 Fortunately I’d remembered to spray myself down liberally with zombie repellant. 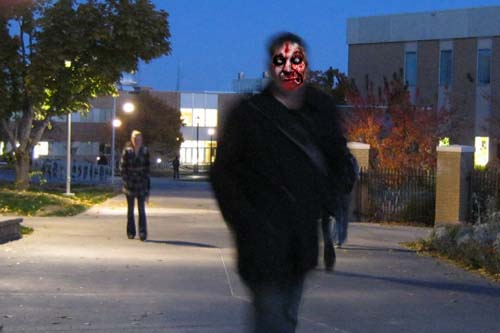 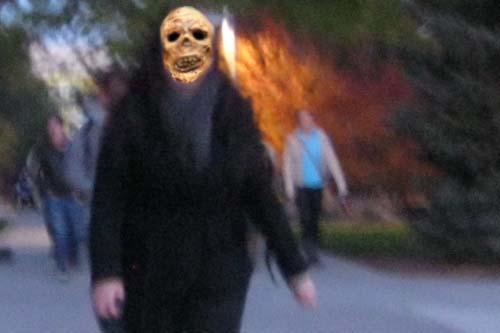 I wish I had BRAINS! 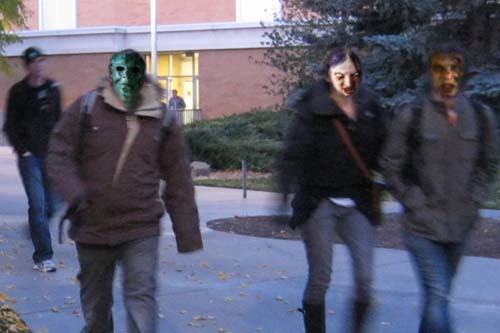 If I had BRAINS I wouldn’t have signed up... 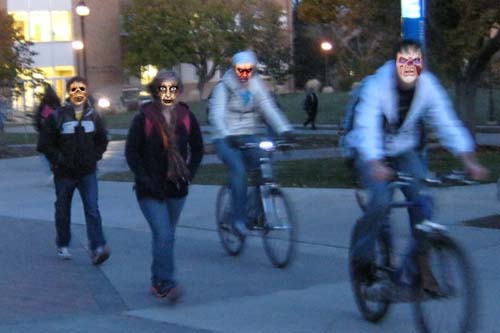 …for this freakin’ 8 a.m. class in this frozen hell. 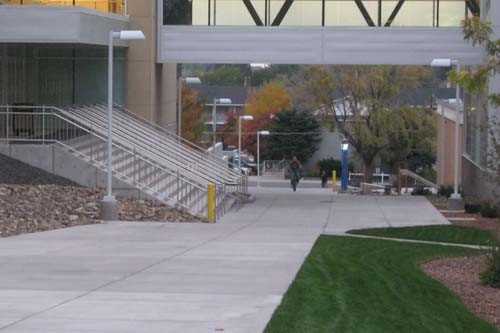 Then the sun came up and they all disappeared. 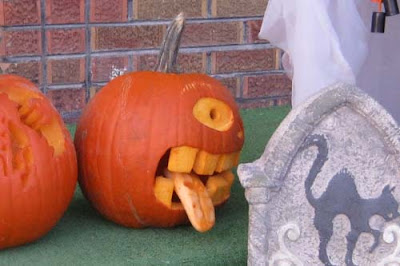 And I was left to wonder if this guy had been dared to put his tongue on a lamp post.
Posted by Leenie at 10:05 AM 10 comments

He wasn’t much to look at. His head was too big and his legs were a little short. 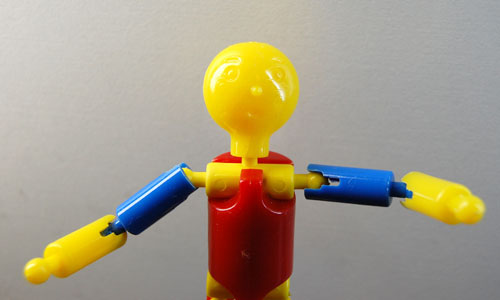 He had no hair and a face more bland than Charley Brown, but I loved him. 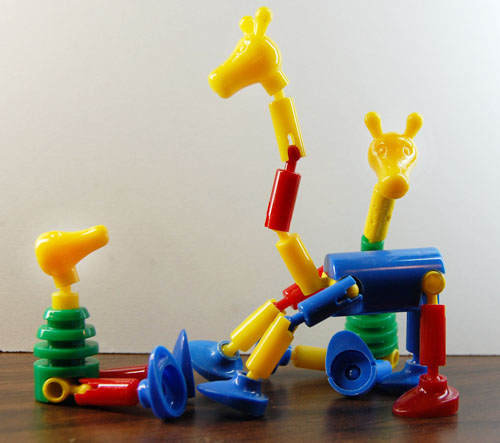 I loved his giraffe, too and that other thing he hung out with which could become a horse,
a dog, a goat, an alien from outer space---whatever. 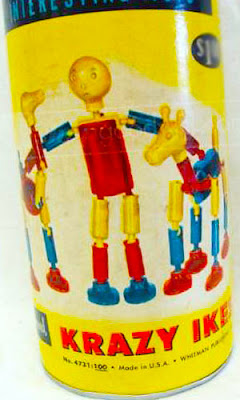 My sibs and I went through several sets of Krazy Ikes. They first arrived in a yellow box. (the toys, not my sibs) Later they moved to a long yellow canister. I remember asking Santa for more Krazy Ikes and being pretty excited when my order came through. 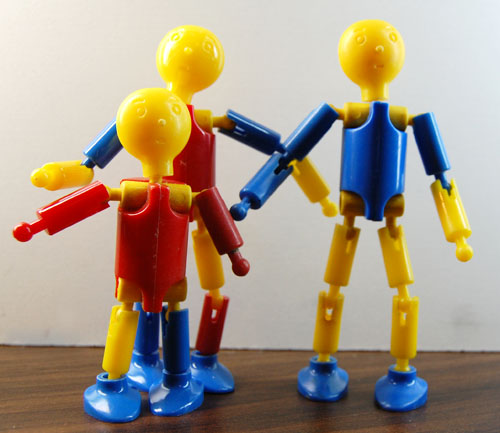 Ike’s features were so vague that they could be girls or boys, grownups
or kids with only a little stretch of imagination. 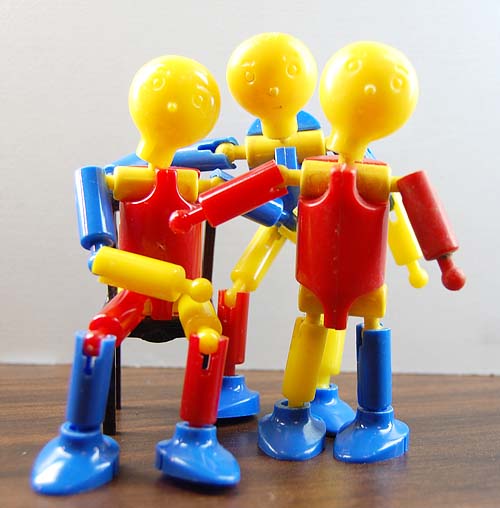 Usually the blue ones were boys and the red ones were girls. 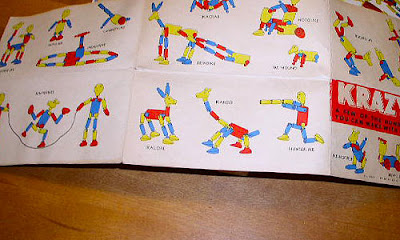 We could make countless odd creations, sometimes using the instruction book for ideas.
But we quickly went from motorcycles and shot guns to space ships, furniture,
weird automobiles, a canon, and on and on. 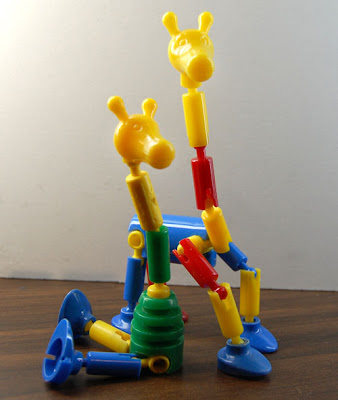 The set I have now is old and brittle so I have to be careful with the hard plastic parts. Some of the soft plastic parts have chew marks from when they were used for teething.

I still find Krazy Ike and his friends so fascinating that it took quite a while
to finish taking pictures for this post. 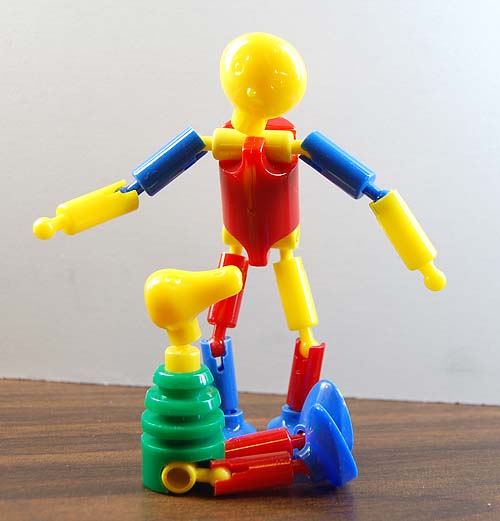 “What do you mean I look sad? You’re the one with the long face!”

“Yeah, but your legs don’t match and your toes turn in.”