On most summer evenings a sunset from the hill above our town looks like this: 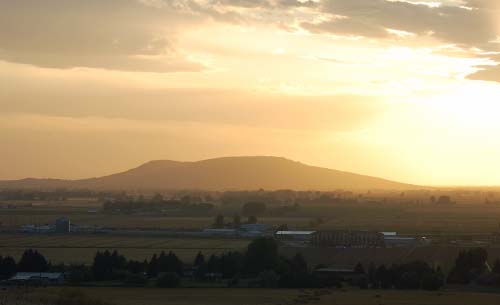 A view across the valley toward a landmark extinct volcano.

Yesterday evening the same view looked like this.
Smoke has settled into the valleys and really messed up the visibility . 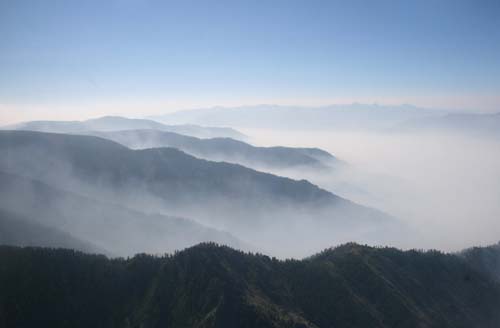 (news photo of fires in central Idaho)
August 22, 2012--Salmon/Challis National Forest, Idaho (KMVT-TV)
The fires continue to burn in central Idaho today.  The Halstead fire near
Stanley has burned 96,235 acres and remains at 5% contained.  Meanwhile
the Mustang complex fire near Salmon has burned 99,450 as of
this time and is 9% contained, according to officials at the scene.
Both fires were lightning caused.

According to the local news, “Air quality in right now is the worst in a generation in many places, and we’re not even speaking of places immediate to the fires.”

There are fires on both sides of us in central and western .

“Due to the lack of moisture throughout the park in the last several days, the fire danger level in has been elevated to Extreme.” 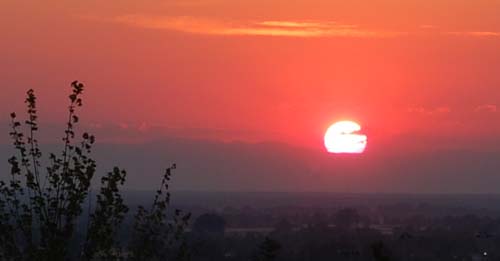 The smoke has produced some spectacular sunsets. Sometimes the air is so murky the sun looks like a magenta hole in the sky.

Another factor is probably field burning after the harvest of grain crops. Farmers usually burn their wheat stubble as an inexpensive way to help control volunteer plants, weeds and disease.  Permits are required for burning and it's been banned in some locations.  But, just like in many areas of conflict, the wheels of change turn slow.

– Possible changes to ’s field-burning regulations still are up in the air after an advisory panel of farmers, health advocates and regulators agreed that some weekend burning could be considered, but they couldn’t reach a consensus on whether to allow more burning when ozone pollution levels are high.

All I know is the air is toxic.  I have Christmas colored eyes—green outlined in red.  My sinuses and throat feel like they’ve been rubbed with salty sand. A little breeze and some soaking rain would really be nice.
Posted by Leenie at 11:14 AM 15 comments

WHAT HAPPENS IN THE JUNGLE...

The up side and the down side of having a
family with too much creativity.

A very short version of a family skit.  Enjoy!