HOW BAD COULD IT GET? part 2 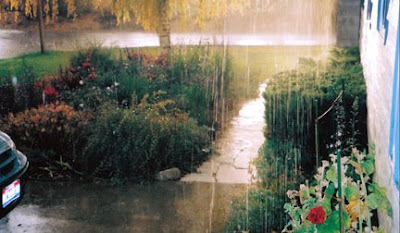 The new garden in a summer rain storm
The transplanted garden did well over the next summers. We added a stone path and a bird bath. I planted perennials native to the area such as mountain columbine and blue camas. Lily of the valley and crocus bulbs, lavender and purple coneflowers were added to the mix. I found seeds for a dark purple hollyhock and planted them with the delphiniums next to the house. They took two summers to get established, but they finally grew so huge that my son dubbed the plants the “Holy Hecks.” The columbine seeded itself through the garden. The bridal veil bush, the roses and the crimson barberry all thrived. 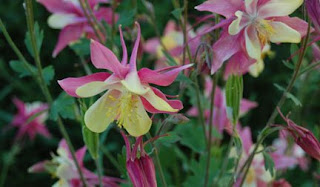 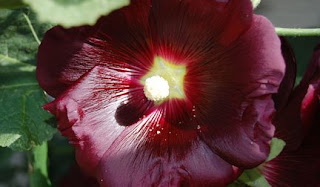 The"Holy Hecks"
to be continued
Posted by Leenie at 9:04 AM 8 comments 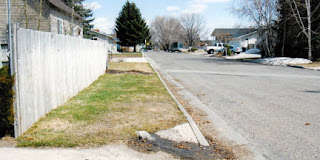 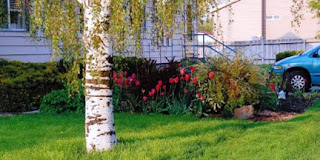 MELTING GLACIERS AND A FLOOD

Ancient Lake Bonneville covered most of north-central Utah during the Pleistocene Epoch, about 14,000 years ago. The lake was filled by the melting of continental glaciers which were estimated to cover thirty percent of the Earth’s surface. There were severe climatic changes during this time which caused the extinction of mastodons, saber-tooth cats, ground sloths and Neanderthals, (sorry Manny, Diego and Sid).

The rapid melting of the glaciers caused Lake Bonneville to overfill and then breach the alluvial deposits at what is now called Red Rock Pass in the south-east corner of Idaho. A torrent was unleashed which ran about 300 feet in depth northward to join the Snake River near the present location of Pocatello.

The floodwaters followed the route of the Snake River across the length of southern Idaho, then veered north through Hell’s Canyon and finally poured into the Columbia River. The water left behind formed The Great Salt Lake.

The Lake Bonneville Flood is estimated to have lasted about eight weeks and left behind scoured bedrock and the removal of huge basalt boulders which were later deposited farther down river. There are fields of “watermelon rocks” along the Snake River plain near Hagerman.

Last week we traveled to Boise along Highway 84

which follows the route of the flood and also the path of the Oregon Trail across the state. Evidence of the deluge is still visible all along the Snake River.

Idaho State University Photo
Most of the area is layered with ancient lava flows from volcanic eruptions.

The river runs through a gorge eroded through these layers. Near Twin Falls the canyon’s walls are vertical.

In other areas the canyon is less steep. Vegetation above the river is mostly scrub grass and sage brush.

Farming is successful where wells and irrigation bring water to the rich top soil.

Because of the open area the wind blows consistently enough to turn huge windmills which generate electricity.

Most travelers across Idaho only see dry high desert. The state’s beautiful forested mountains, clear deep lakes, lush meadows and herds of big game remain a secret known only to those who leave the beaten path.
Posted by Leenie at 7:10 AM 7 comments