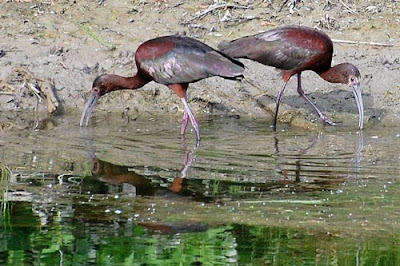 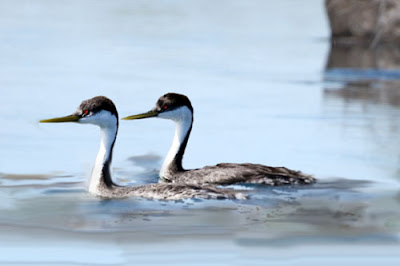 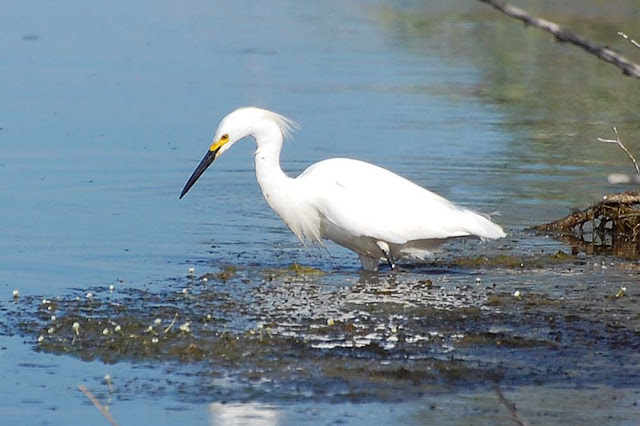 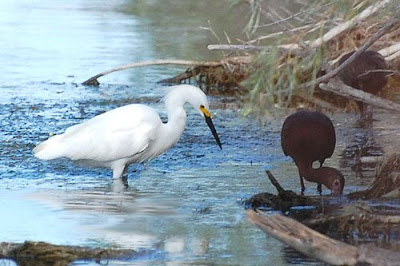 and an egret with more ibis.
Posted by Leenie at 6:59 PM 10 comments

If a FIRE burns a couple of hundred square miles of range land and it is not reported on national news, does it matter?  Even if it is the biggest wildfire burning in the nation?
Well, maybe some national news picked it up, but I didn’t see it.  If those flames were torching mansions and tennis courts the world would hear about it. But families of antelope, rabbits and varmints are not newsworthy. And I guess the acres and acres of farm crops that would be toast except they are too green to burn are not as important as golf courses and lah-te-dah estates.  But just as well.  If people seeking uncrowded places, with clean water and air knew about this part of the world they would promptly crowd it and fill it with pollution.
The wind had been blowing around 30 mph gusting up to 50 mph for two days earlier this week. 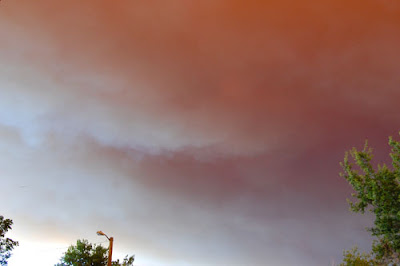 Tuesday afternoon I looked up from my desk and saw the sky was filled with really weird clouds.  I stepped out on the porch and took some photographs-- 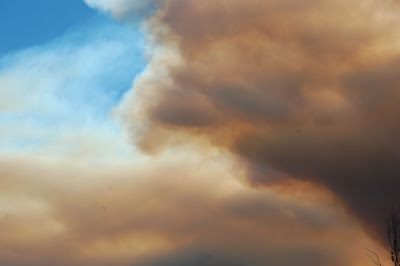 of smoke rolling across the sky. 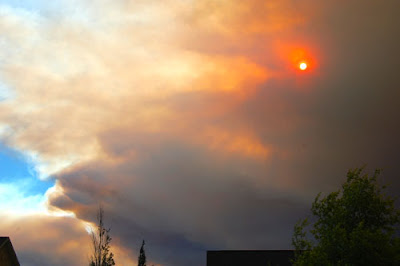 Within minutes the sun was darkened and finally blotted out. 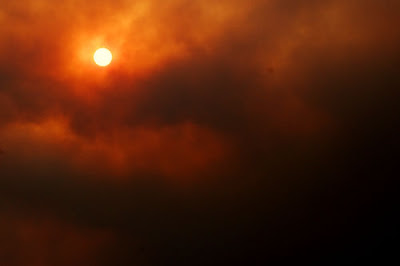 Wind was bending the trees and carrying the smoldering clouds in from a fire blazing across the wide open grassland of the Idaho National Laboratory reserve 30 miles west of here. 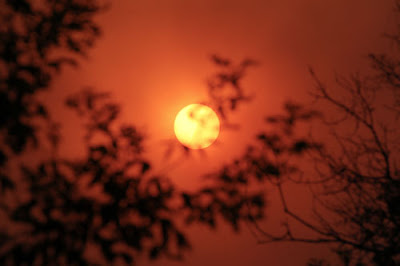 Around 300 firefighters using fire engines, a helicopter, bulldozers and air tankers went to work on the blaze.
Even now on Thursday the fight goes on, although the smoke around here has cleared.  On my walk home I saw a car full of fellows dressed in range fire fighting gear looking worn and grimy coming out of Taco Bell.  They climbed in their car and drove west.
No one is saying what caused the fire.  Whoever gets blamed will be in deep crap for a long expensive time.  Maybe the scandal will make national news…or not.

Satellite view of the plume of smoke.  It flows from the middle of Southeast Idaho and up into and .
Posted by Leenie at 2:49 PM 10 comments

For the first time in years everyone in our immediate family was in one place---grandparents all the way down to the baby born in March.  Rather than go through the hassle and expense of a professional family portrait, my camera was set up on a tripod, the crowd of twenty-seven was gathered on the lawn (a major achievement in itself) and the shutter was tripped by remote.  After a couple of dozen shots the outcome was digitally preserved for posterity and the animals were released into the wild.
The final product will be a job for Super Photoshop.  Since no one was behind the camera to direct attention there were some interesting results.  Two young men had a new face for every click of the camera. 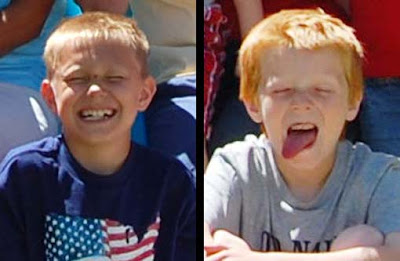 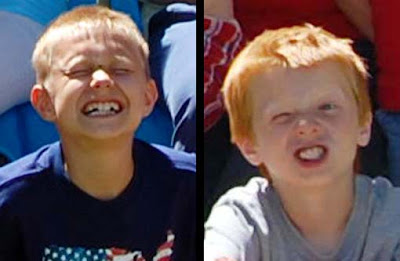 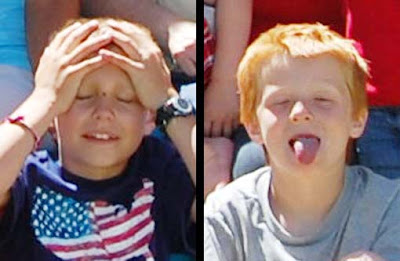 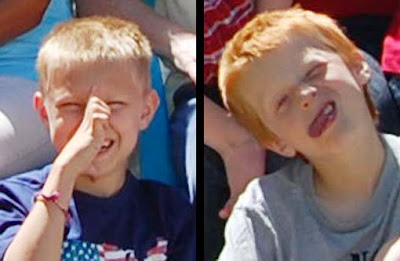 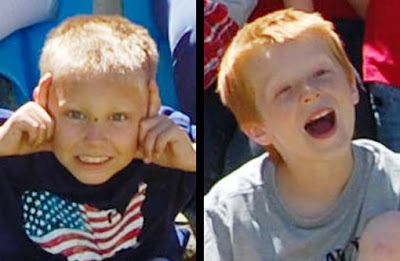 And they weren't the only ones having fun. 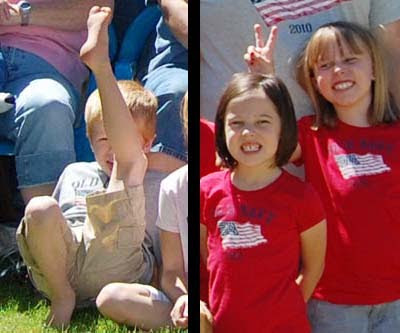 The whole thing was strangely familiar. 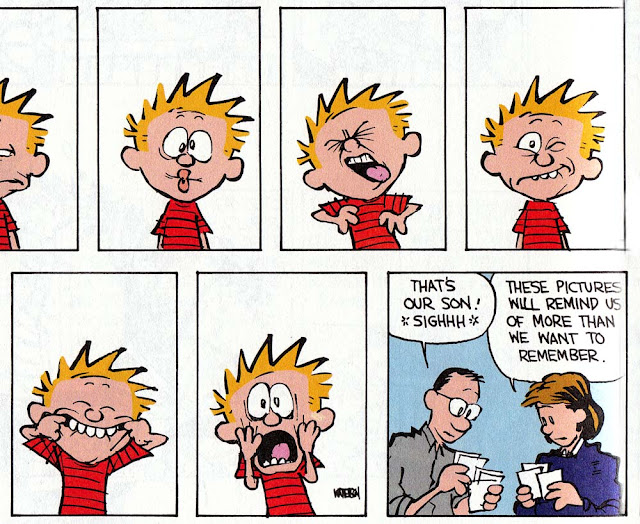 One of the reasons Bill Watterson’s Calvin and Hobbes is brilliant, is because it is so real.
Posted by Leenie at 5:24 AM 9 comments

Our family gathers to celebrate Independence Day at our house. 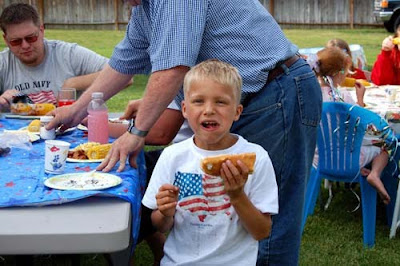 There are several days of fun, food, water splashing, did I mention food? (hand cranked ice cream, watermelon, barbecued ribs) giggling, games and fireworks.
The guys take their fireworks seriously.  Our state has laws against amateurs setting off flaming things that fly through the air.  There are also laws against BIG explosions—mostly because they--EXPLODE!
However…we have a son in law who likes to improvise (not IED’s and not IUD’s and not roadside bombs, although he is a former marine). He and his brothers-in-law buy legal fireworks and...erm...modify them.
The result is some extra big bangs and flying things such as plastic bottles and soup cans.  On the evening of July Fourth our short, dead-end street goes up in sparkles and booms.  Our neighbors either join in or leave town.
Our “experts” are careful to keep the kids out of harm’s way.  We had a four-color chalk line drawn across the driveway, plenty of stern warnings plus a running hose and buckets of water in case of flameage. 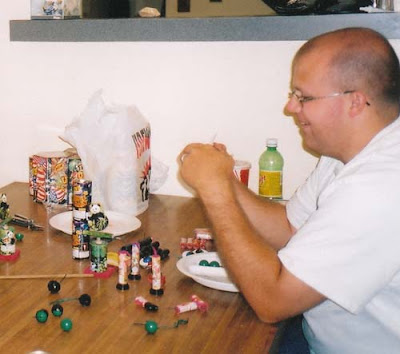 The first year the “modifications” happened I came home from work and found a firework factory in my dining room.  Needless to say that little activity was banned to the back yard.
So it was the afternoon before the celebration.  Cousins were playing on the lawn.  Moms were in lawn chairs catching up on news, and the savory scent of barbecue was in the air.  Son-in-Law (we’ll call him Sparky) was isolated to a table a few yards away working on making the evening’s fireworks even more spectacular.  The rest of the guys had gone for more fireworks supplies. 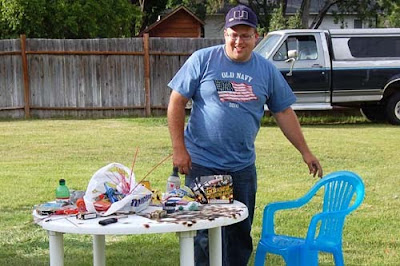 A popping sound focused our attention in Sparky’s direction.  Small explosions were escalating to larger ones in the middle of his production area.  He jumped to his feet and swept a pile of brightly colored igniting pyrotechnics to the grass.  There was more popping and much stomping followed by silence. 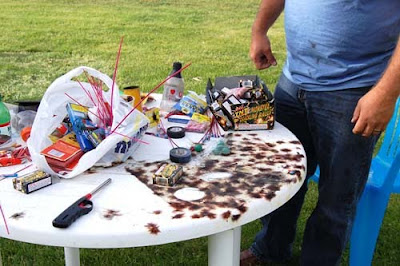 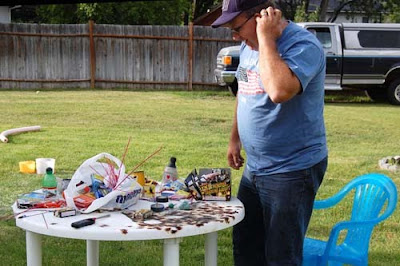 he was okay and the rest of the fireworks remained intact. 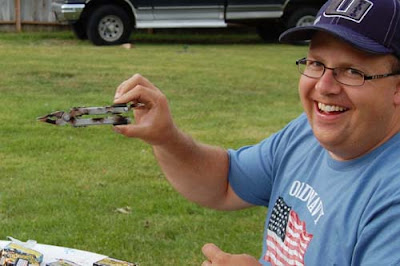 toasted Gerber tool
I only wish I’d had the video camera running. 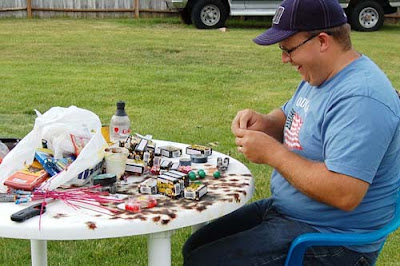 We could have had some great material for ’s Funniest Videos. 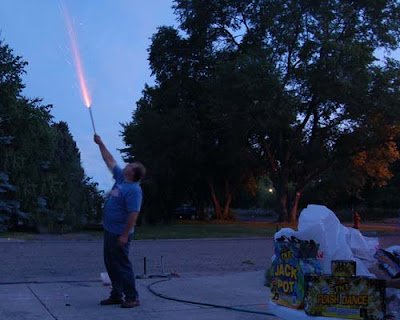 Sparky with a (smuggled in from ) roman candle.
Posted by Leenie at 6:40 PM 10 comments