NaPoWriMo PROMPT: Write a poem in which one or more flowers take on specific meanings. 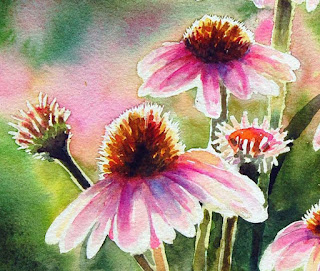 But coneflowers wait
‘Til others fade in summer heat.
Bringing smiles when they’re needed,
They stand for strength, endurance, healing.
Their pink petals catch the sunrise
And persevere until sundown for days.
Like pioneers of the prairies
They survive and persist.

And there in their center
A little hedgehog
Curls up for a nap.

(illustration is one of my watercolors.  See more here.)

NaPoWriMo PROMPT: Write a hay(na)ku consists of a three-line stanza, where the first line has one word, the second line has two words, and the third line has three words. You can write just one, or chain several together into a longer poem. 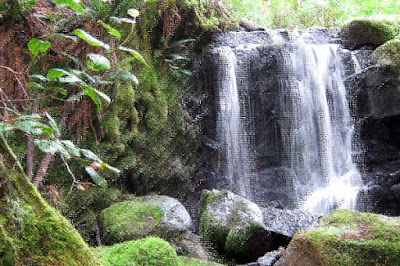 Breathe.
The first
Thing you do

When
You come
Into this world,

The last thing
You do
When

You leave this
Life.  So
Breathe.
Posted by Leenie at 1:22 PM 1 comments

NaPoWriMo PROMPT: Write a “concrete” poem – a poem in which the lines and words are organized to take a shape that reflects in some way the theme of the poem.

NapoWriPo PROMPT: Peruse the work of one or more of these twitter bots, and use a line or two, or a phrase or even a word that stands out to you, as the seed for your own poem.

I met a traveler dressed in camo green.
His two vast legs had pockets down each side.
His rifle was a cold killing machine.
His sneering face had greenish paint applied.

I asked him why he wore the combat gear.
“I’m hunting fuzzy wabbits in the wood,
Or maybe just a porcupine or deer..
But right now a loo would do me good.”

I said, “You think out here you’ll find a loo?
Ask any bear around and he will say;
‘Right on the ground is where you leave your poo.
It greens the grass as soon as it decays.' "

He wrinkled up his lip just like a king.
“If I did that may lightning strike me dead.”
A cloud let loose and struck him with a zing.
Nothing beside remains but melted lead.

*Ozymandias--(see what I did there?)

NapoWriPo PROMPT: Today our prompt is an oldie-but-goodie: a poem based on a news article. 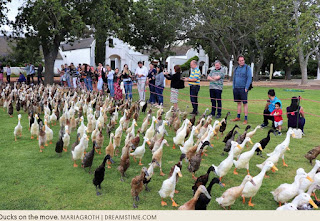 At a fancy South Africa winery estate
They’ve hired a force of two thousand ducks.
Do they sample wine with discerning tongues?
Do they know Sauvignons from Merlo deluxe?


No, they join in a daily duck parade
And march all the way to the vineyard fields.
There they gobble up bugs and snails and pests
To protect vine growth and improve the yield.


They’re allowed to poop as much as they like.
The soil is improved by the poultry muck.
So if your Chardonnay has a hint of dung,
Don’t turn up your nose, just blame the ducks.

NapoWriPo PROMPT: Write a poem from the point of view of one person/animal/thing from Hieronymous Bosch’s famous (and famously bizarre) triptych The Garden of Earthly Delights. 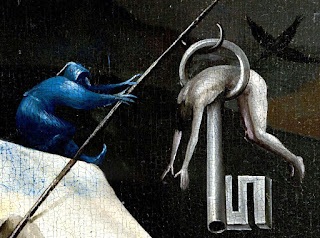 Here is Charon. With his oar

He rows across the River Styx.
Ferrying dead from life to death,
When we will meet we can’t predict.

M's are written on our palms.
They signify “Memento Mori.”
To remind each living soul
“Don't forget we all must die.”

But also note the giant key.
What’s ours to have is ours to give.
Enjoy the Now.  Love and Share.
“Memento Vivere.” Remember—Live.

NaPoWriMo PROMPT: “Twenty Little Poetry Projects,” The challenge is to use all on the list in the same poem. Of course, if you can’t fit all twenty projects into your poem, that is just fine too! (List follows poem). 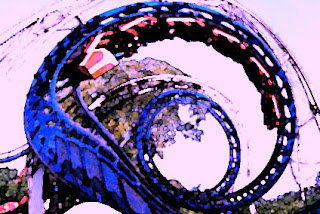 The moon was a balloon on the horizon
That evening I ate the roller coaster.
The air smelled pink and lime green.
Becky and I wandered through the Magic Kingdom.
Listening to the clash of carousel music and ride screams.
“Killer,” (she called me Killer ever since
I knocked out the giant girl with a basketball)
“We need to ride the ‘coaster before we go home.”
“Yes, I want to! But wait ‘til I finish my ‘dog.”
I didn’t want to. Not at all.
The roller coaster sighed into the dock.
Metal shrieked against metal.
Passengers departed in disarray on the left.
We scrambled in on the right.
Because my red shoes were cool I followed Becky.
We sank into the sticky, sweaty seats.
And were fastened down like marshmallows
On a stick over a fire. We were toast.
Behind us in another car I heard,
“It’s a good day to die, y’all!”
“Buen dia para morir!” cried someone else.
“TAWANDA!!” yelled Becky.
“We’re going to eat this ‘coaster for dinner!”
I could still taste mustard and pickle relish.
The death train jolted awake.
Was I hearing the clacking of the track?
Or my pounding heart?
We eased straight up the first hill. Then…
A moment of silence for those about to die.
Instantly the hungry earth was rushing toward me.
Suddenly the sky was swirling under my feet.
I shut my eyes and clenched my teeth
To prevent an out-of-body experience.
The coaster charged around a curve
Pinning me down like a displayed bug.
“Wow, fun, huh, Killer?” Screamed Becky.
I barfed a little in my mouth
But kept the hot dog from surfacing.
Two more hills and we headed for home.
Killer is not a killer now. Killer needs a new nick.
The air smelled brown and olive green.
Yeah, I ate up the roller coaster
But I didn’t spit it out.

1.      Begin the poem with a metaphor.
2.     Say something specific but utterly preposterous.
3.     Use at least one image for each of the five senses, either in succession or scattered randomly throughout the poem.
4.     Use one example of synesthesia (mixing the senses).
5.     Use the proper name of a person and the proper name of a place.
6.     Contradict something you said earlier in the poem.
7.     Change direction or digress from the last thing you said.
8.     Use a word (slang?) you’ve never seen in a poem.
9.     Use an example of false cause-effect logic.
10.  Use a piece of talk you’ve actually heard (preferably in dialect and/or which you don’t understand).
11.   Create a metaphor using the following construction: “The (adjective) (concrete noun) of (abstract noun) . . .”
12.  Use an image in such a way as to reverse its usual associative qualities.
13.  Make the persona or character in the poem do something he or she could not do in “real life.”
14.  Refer to yourself by nickname and in the third person.
15.   Write in the future tense, such that part of the poem seems to be a prediction.
16.  Modify a noun with an unlikely adjective.
17.   Make a declarative assertion that sounds convincing but that finally makes no sense.
18.  Use a phrase from a language other than English.
19.  Make a non-human object say or do something human (personification).
20. Close the poem with a vivid image that makes no statement, but that “echoes” an image from earlier in the poem.