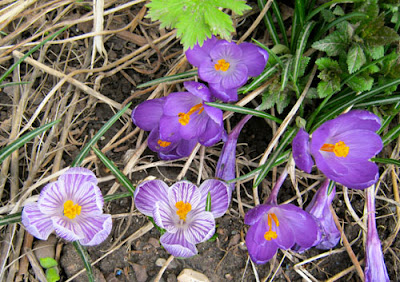 The crocuses are blooming! 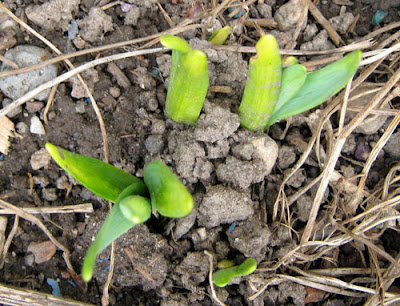 The daffodils are poking out little green leaves. 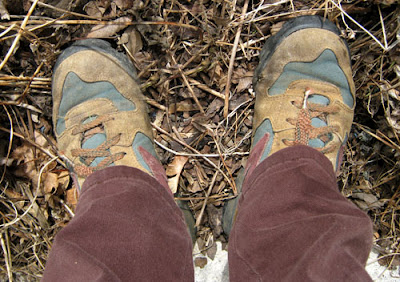 So today I put on some shoes I haven’t worn since last fall
and went forth to dig in the garden.  I savored this chore
even more after remembering how a year ago at this time
I was recovering from surgery and spending my time watching
airplanes fly by my bedroom window. 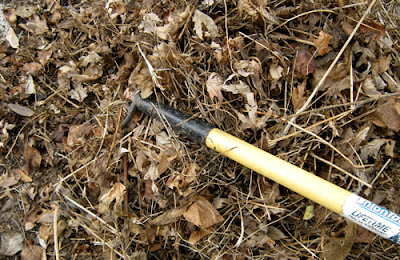 It took most of the afternoon to clear the dead leaves and debris
so the baby tulips and other perennials could feel the sun. 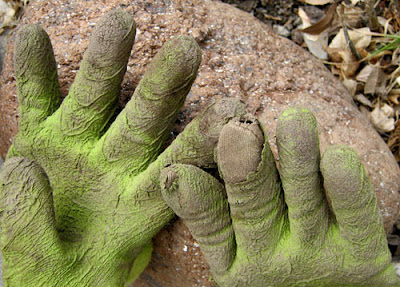 My favorite gloves aren’t going to make it through another season.  This means another trip to the farm and ranch store.  Darn. (heh heh).  Maybe while I’m shopping I’ll check to see if there are bunnies and baby turkeys added to the cages full of baby chicks and ducks.

After hauling four or five wheelbarrow loads of stuff to the compost heap I went in the house, took off my garden shoes and, for the first time since last fall, I put on sandals. I also discovered I had sticks in my hair and a ladybug down my neck. 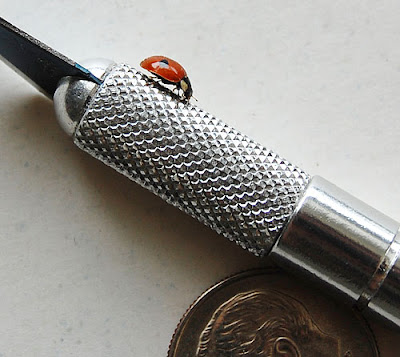 I took the ladybug back outside and then returned to the house
to make pies for Sunday dinner.
Posted by Leenie at 6:53 PM 14 comments

Last night I found myself caffeine buzzed, wide awake and internet surfing.  I saw a few things I really wish I hadn't, learned some stuff and stole some photos. But, hey, if it's online it must belong to the world, right?

Maybe the reason for the obesity epidemic is everyone is standing in their shower using hair products which are supposed to add volume and body.  Shouldn't we be using that dish soap which claims it: "Takes grease right out of your way."? 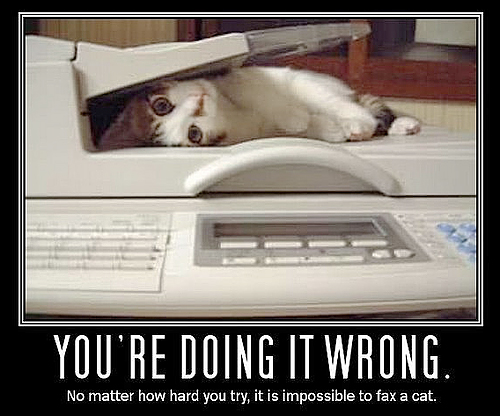 Before you criticize someone--walk a mile in their shoes.  Then you'll be too far away for them to hear you and you'll have their shoes so they can't run after you. 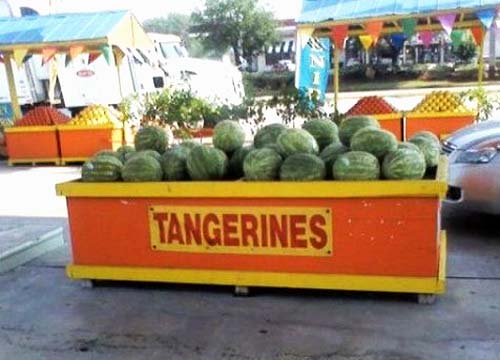 Avoid writing down or sharing photos of anything that could embarrass if made public. 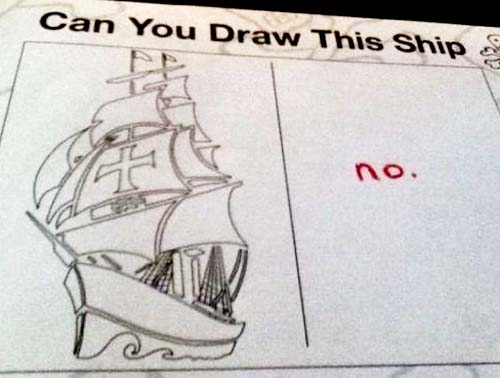 I have a very firm grasp on reality.  I can reach out and strangle it at any time. 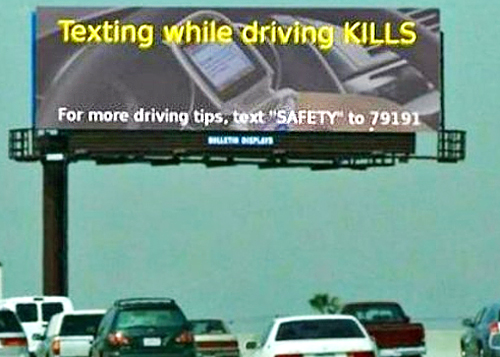 Never put both of your feet in your mouth at the same time
because then you won't have a leg to stand on. 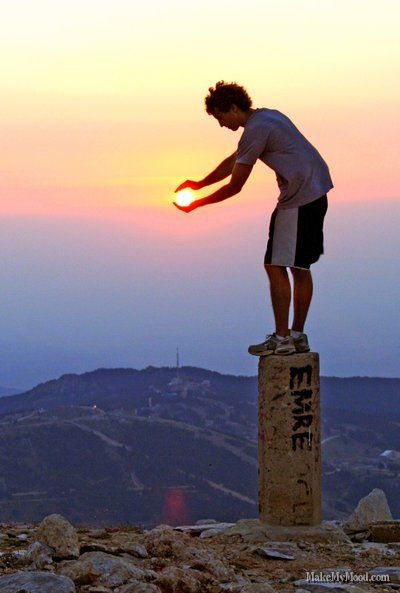 If you type askew into Google search the whole page tilts.
Check it out and come back and tell me if it isn't true.

For more of my "Stuff I've Learned" Click on the post label link below.
Posted by Leenie at 11:51 AM 12 comments

In September of 2008 DH and I made a trip through Yellowstone Park to Cooke City, Montana.  From there we drove the switchbacks over Beartooth Pass and then on down to Red Lodge.  Although it's been called, "the most beautiful drive in America," it is also intimidating and daunting for the person at the wheel.  That's why I let my hubby drive while I gave all kinds of advice and pointed out all the scary and scenic parts as he gritted his teeth and sweat collected on his upper lip. 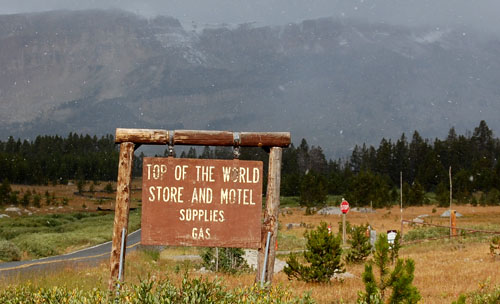 We left Cooke City just ahead of a storm.  We stopped at the Top of The World Store and Motel which was not at the top of the pass.  We didn't pause long because, as you can see in this photo, there were already snowflakes in the air. 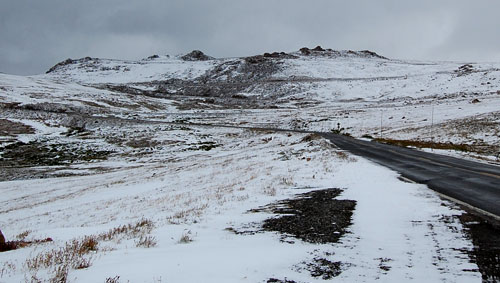 In a few more miles we were looking at the results of an earlier storm and a highway that zig-zagged up over the crest of the divide. 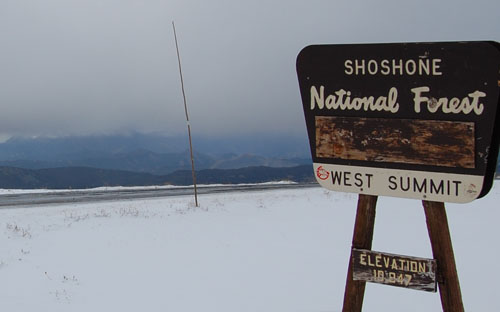 The road topped out at 10,947 feet before it took us down the face of a cliff and on into Red Lodge.  Notice the pole in the background of this photo.  It is one of many set along the way to make it possible for snow plow drivers to find the highway during a storm.

In spite of, and because of the incoming weather, I had DH stop several times so I could jump out and photograph the view from the summit.  When I got home I went over the pictures with mixed feelings.  Most photos of big places never capture the true impressions.

So the other day, using those photos, I went to work on a watercolor to see if I could capture the perspective and sensation of an approaching snow storm at that altitude. 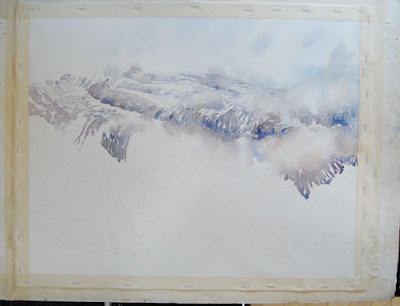 I chose a 14x18 inch format and started with the distant mountains. 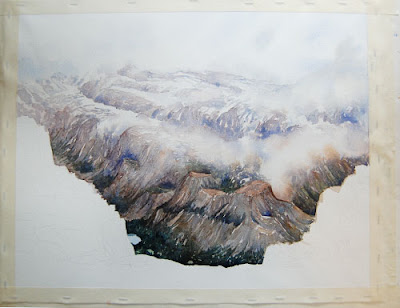 Then I added the middle ground, and the small lake down in the valley. 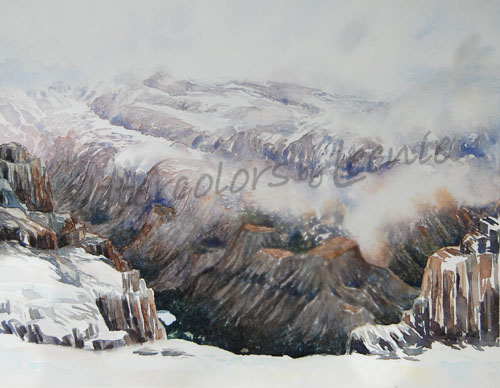 Today I painted in the snowy foreground and the nearby cliffs.  I may tweak it a little more but I think it comes closer to my impressions of the moment than the photos did.
Posted by Leenie at 6:30 PM 7 comments

Sunday afternoon:  I'm finishing up my photo album for 2011.
Here are some pictures I just thought I'd share. 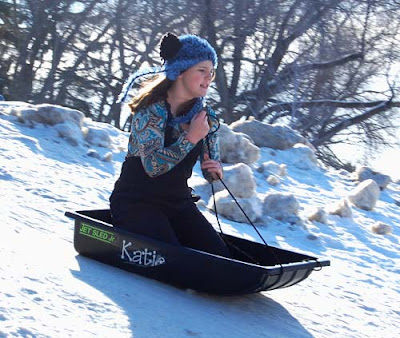 January--a mixture of determination and fear 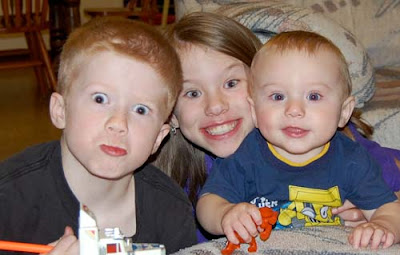 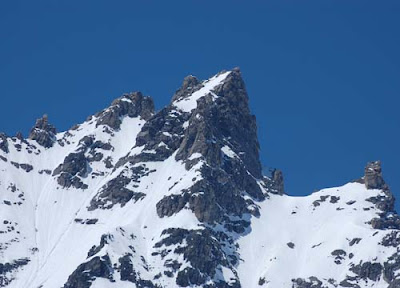 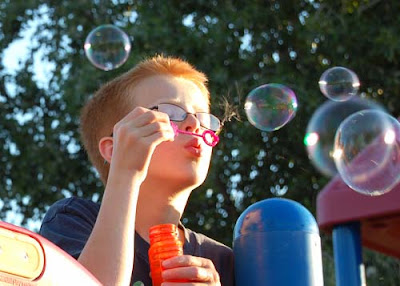 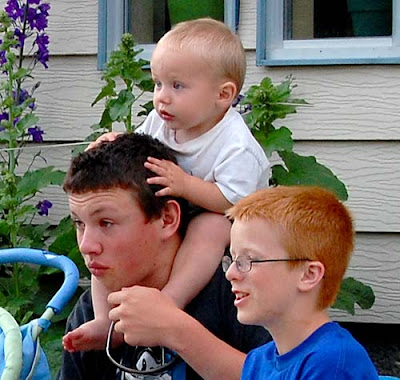 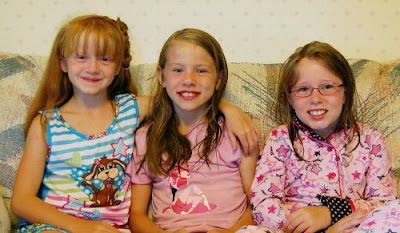 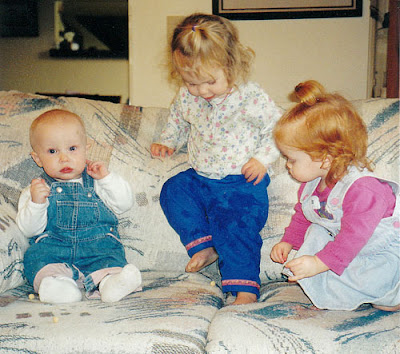 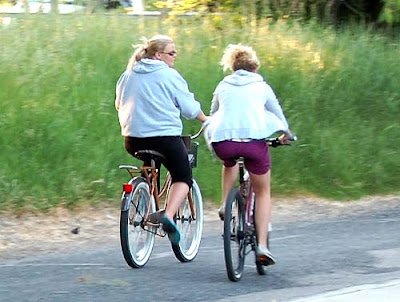 Autumn 2011--View from our front porch 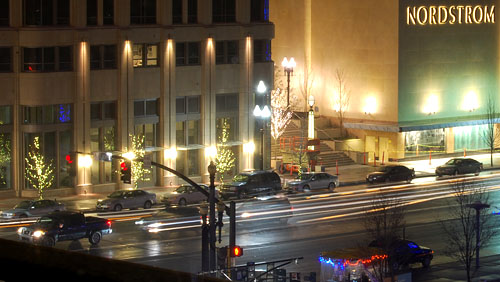 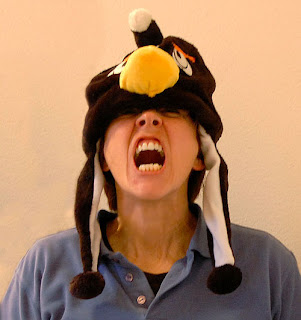