VAMPIRES, ZOMBIES AND A THIEF IN THE NIGHT

DH and I  were adjusting pretty well to living in the woods in a 26 foot RV.  We found most of the stuff we stashed in all the cubby holes.  We figured out how to light the gas stove without blowing ourselves into the next county.  And we invented a dance that allowed us to move through our routines in the crowed quarters.

We were even growing accustomed to doing without our queen-sized bed and to waking up to the songbird choir.  But we weren’t happy about the vampires.  Millions of blood sucking mosquitoes waited to attack the moment we left the safety of our tin tent.  If they managed to slip inside, they mocked us with their whine as they floated about.

The most wicked would wait in a dark corner and then hum in our ears after we went to bed, telling us how they’d drink our blood as we slept.

We got pretty good at hunting them down and mashing their little bodies against the walls.  Our reflexes quickened so we could snatch them out of the air and crush them with our fingers.  We developed a routine of soaking ourselves in repellent before we went about our outdoor tasks.

The zombies were another story. Right after we arrived at camp, an infestation of tent caterpillars filled the trees and shrubs with slowly marching fuzzy stripped maggots.  We stepped on them by accident and on purpose.  Dozens of them walked to the edge of the pool and fell in both when it was empty and when it was full of water.  We even painted a few of them sky blue along with the pool. They were so plentiful that they became a scourge that stripped acres of aspen trees of their leaves.  The birds gorged themselves and fed them to their babies until they cried, “No! Not caterpillars AGAIN!”

We suspected and even expected the thief. If we happened to be awake in the night we thought we could hear something moving around in the dark.  Then we brought home an especially delicious purchase of fresh, sweet cherries from the only grocery store in town.  We ate our fill and left the rest in a bowl on the table.  The next morning we found a couple of the cherries had been sampled by tiny teeth.  There were also itty bitty black poo lumps left behind by the cherry crook.  We’d been careful to store most food in hard containers or in the fridge but our negligence had caused a breach in security.  We broke out the mouse traps we’d brought along for just such an occasion.  We baited them up with cheese and waited.  The traps were robbed but unsprung.  So we went to the campers’ cooks and begged a spoonful of peanut butter.  We set the traps again and joined everyone at evening campfire.

When we returned we found a fat little white-footed deer mouse in a trap, still twitching and not quite dead.

Using the boot heel method we made certain it was deceased and tossed it way out into the forest to warn others who might have the same idea.
Posted by Leenie at 8:10 AM 4 comments

The first large group of youth with adult leaders arrived at our camp to occupy the cabins, enjoy the facilities and see if the plumbing was up to the challenge.

After DH and I had spent hours chipping out the old caulking, pressure washing and working over the plumbing… 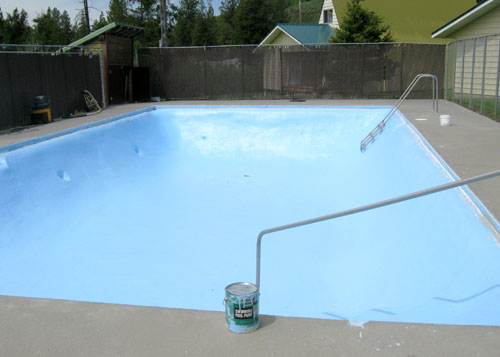 …and spending even more hours in the hot sun applying a new coat of paint, and then losing sleep while it filled with water; we had a real personal interest in the camp pool.

We got up early, cleaned and checked it one more time before it was made available for a large group of swimmers. 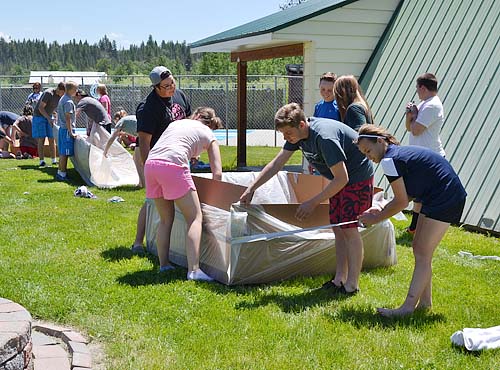 That afternoon the campers were divided into teams, given boxes, wrapping plastic, and duct tape and told to build boats. 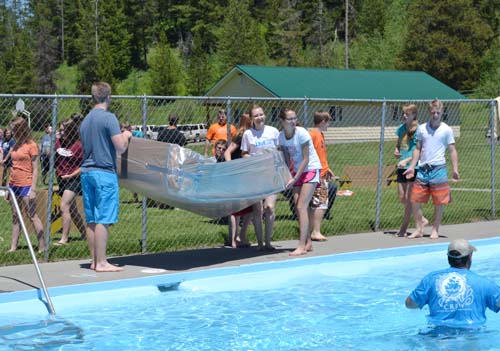 When the boats were ready they lined up three at a time to put their designs to the test. 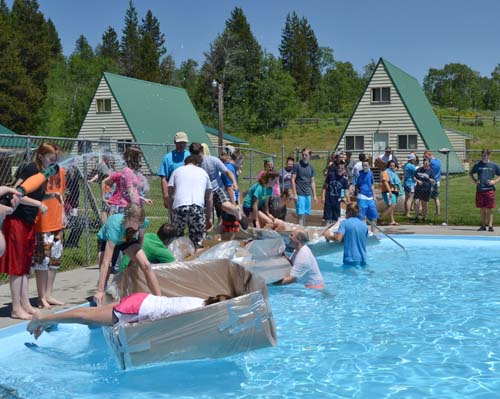 Four members of each team got into their craft to ride across the sort distance of the pool. 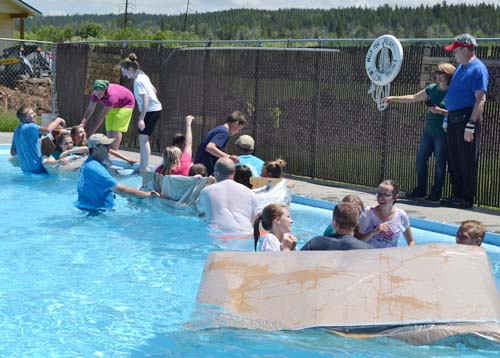 A lot of the boats made it with very little problem. 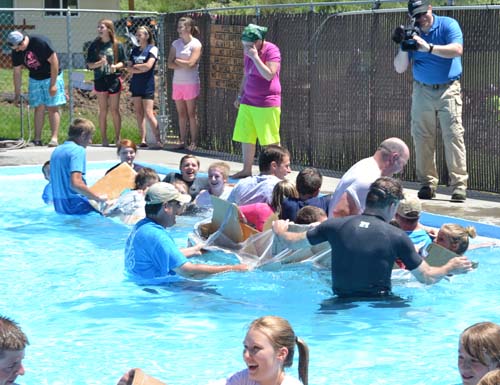 The second trial was to fill the boats with as many as possible and try to make it back to the other side. 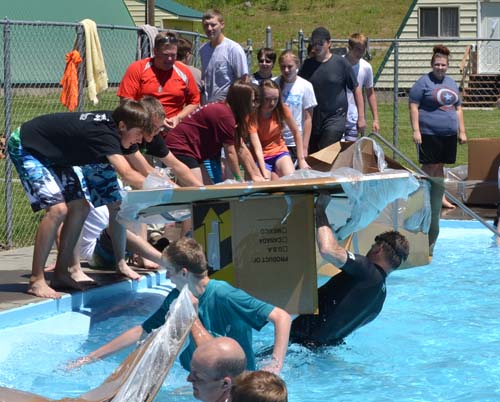 There were all kinds of boat designs.  Some were sea worthy and carried their passengers well. 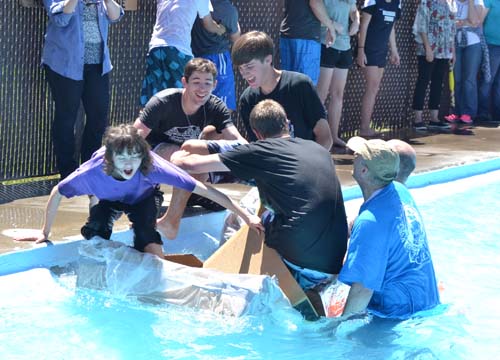 Some didn’t even make it away from shore before collapsing. 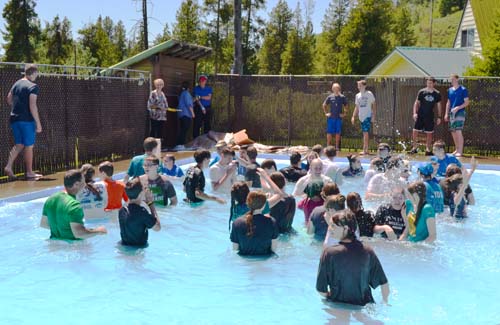 When the boats and boaters had all been soaked and sunk, the pool became the site of a giant water fight. 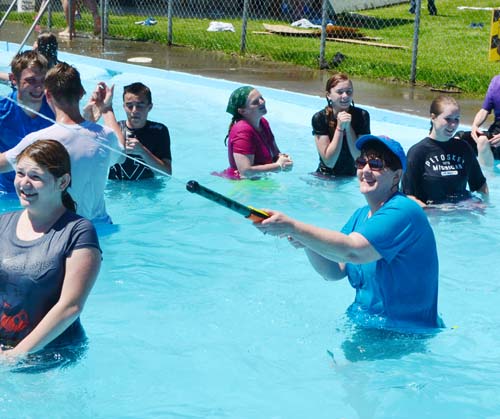 Adult leaders joined the youth in the water, or were thrown in. 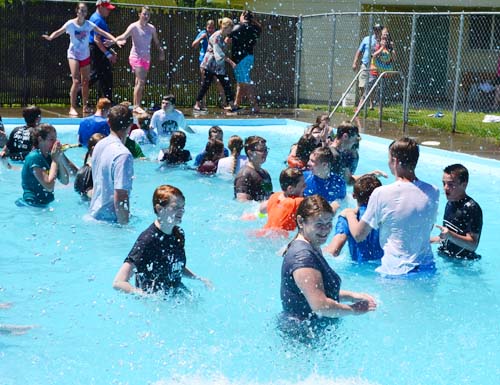 The weather was perfect and the campers were outstanding.  When everybody was out of the water, assignments were made to clean up the debris.  Aside from a few bits of cardboard in the filter, the pool survived the episode with flying colors.