We fired up our wood stove Sunday. DH had cleaned it and tuned it up. It was cold enough to test the wood that had been split and stashed for the winter. I contributed to the starting of the fire by donating two sheets of 100% cotton watercolor paper. On the paper were painting disasters. They burned great.

I was working on what is called aerial perspective. That is, far away objects appear lighter in color. If I started too dark on the most distant areas I would run out of shades coming forward.

This is my third attempt at capturing the feeling of an afternoon ride on a ferry in Puget Sound.

I tried to use a little of what I learned a long time ago when I studied Oriental Watercolor for a very short time with two Chinese teachers. The art is very disciplined and requires great skill. Like haiku poetry it involves simplicity. The challenge is to use the fewest possible lines and tones with useless detail eliminated. The painting is mostly monochromatic and a good artist can create many shades of gray.
My painting has a long way to go to match the beautiful ancient art form of Sumi-e, but it was good to be reminded that things in the distance can be brighter than you imagine and usually even the darkest places have areas of light.

And to answer the question, "Do I display my art in shows?"  The answer is, no.  I've had my art in galleries, but the demands are too great.  There is little money to be made and too many people to please.  I don't even belong to the local art guild because it would soon involve committee meetings and paperwork.  My art is something I do for fun.
Posted by Leenie at 10:11 PM 15 comments

As usual I’m lying in the dark looking up at the ceiling fan listening to DH snore. My brain is working overtime distressing over impending doom, disaster, tsunamis, earthquakes, morons in places of power, financial crisis—like a circle in a spiral, like a wheel within a wheel, never ending or beginning on an ever-spinning reel, like a snowball down a mountain... STOP! Wait.

Last Saturday we traveled 620 miles on Interstate 15, and although we saw a few fools behind the wheel, nobody tried to kill us. I spent some cuddle time with a Very Important Five-year-old snuggled under one arm while a Very Important Eight-year-old drew pictures and expounded on the good guys and bad guys in one of his video games (still a little confused on that one).

When it was my turn to drive, for once, it did not rain torrents or blizzard. And when, in the dark in the middle of nowhere, I saw blue and red lights in my rear view mirror I was cruising five miles under the limit. When the guy with the Smokey Bear hat shined his flashlight in my eyes he had a friendly face and just wanted to tell us our taillights were out and we should proceed with our hazard lights on. A few miles later we pulled into a well-lit service station and, because of a minor melt-down involving pulling too much power from the dash lighter a few weeks earlier; DH knew where the fuses were in our newish car. And there was a new fuse just the right size. We were on the road in minutes taillights blazing.

All was well at home when we returned except the cat demanded we open a can of food. The dry stuff wasn’t doing it for him.

Yes, the hole can get big and dark and scary, but there is still a donut around it.
Posted by Leenie at 10:44 AM 11 comments 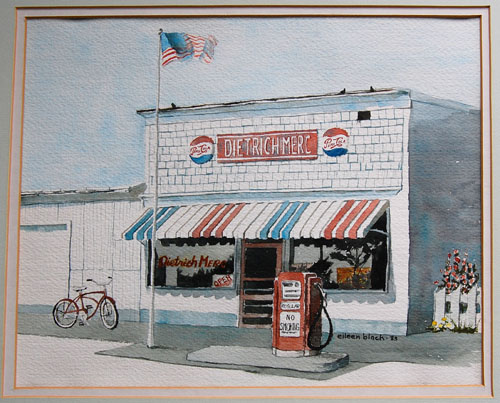 Watercolor of Dietrich Merc painted in 1983 and given as a gift to my parents.
Then returned to me a year ago at their passing.


The screen door announced the entrance of a girl dressed in denim and carrying a stack of school books. She asked for the use of the telephone. Mr. Royce set the phone on the counter and went back to stocking shelves.


“Mom? I’m sorry. Can you come get me? I missed the bus…..I know…I thought I could get a ride home with Danny, but he had to stay for football practice. Okay…okay, ‘bye.”


The store smelled of the oil on the dark wood floor, plus a mixture of soap, leather, cardboard boxes and fresh produce. The girl put some coins by the register and pulled a bottle of Hires root beer from the cooler. A pop and a hiss sounded as she removed the cap. She settled on the box seat by the window and opened a book. The shadow of the store found Buddy in the street. He gathered himself up and trotted to the door when a green Chevrolet sedan stopped in front of the gas pump. He slipped inside as a tired-looking woman entered the store.


“Pick up some cereal and bread while I get a new one of these,” said the woman to the girl as she held up a broken fan belt. Mr. Royce smiled, took the belt and walked to the back of the store. By the time he returned, there was a box of corn flakes and a loaf of Wonder Bread, in the white bag with the red yellow and blue spots, on the counter. A bottle of Heinz ketchup and a tin of bag balm were added to the collection. The woman asked for half of a pound of baloney. Mr. Royce turned on the meat slicer and skillfully cut and weighed the meat and wrapped it in white paper. The new fan belt was rung up with the groceries. The woman and the girl left the store. Buddy settled with a groan into his spot behind the counter.
Posted by Leenie at 1:29 PM 5 comments