Most of my life I’ve lived in the .
On any clear night in the summer I can look to the
southern horizon and see the constellation Scorpio. 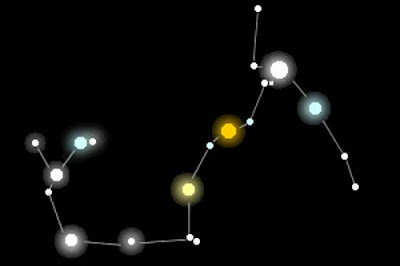 I’m no expert on astronomy, but it’s fairly easy to pick out
the big hook of its tail and the bright star Antares that marks the head. 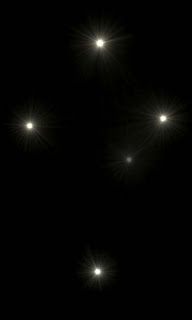 In 2007 I traveled with a group to .  While we were there we visited a planetarium. We learned a little about how the ancient people of that part of the world studied the stars and planets and incorporated the night skies into their legends and navigation.
After the program the instructor went outside with us and pointed out the Southern Cross.
For people of the Northern Hemisphere this was a new and amazing sight.  Then I asked her to locate my old friend Scorpio.  She directed my eyes to a place straight overhead.  It was astonishing to see it so out of place.
At this time of year, if I go for a walk in the morning it has to be in the dark.  Here in December sunrise doesn’t happen until after seven a.m.   A day or so ago the usual cloud cover was gone and the pre-dawn sky was the color of ultramarine blue, fresh out of the tube. 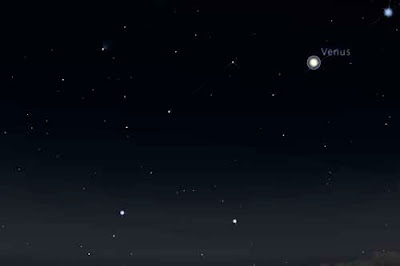 Venus was so bright in the southeast
that it looked like an incoming airplane’s landing lights.
I stopped to gawk at the brilliance of the winter sky
and felt that same feeling of shock to see … 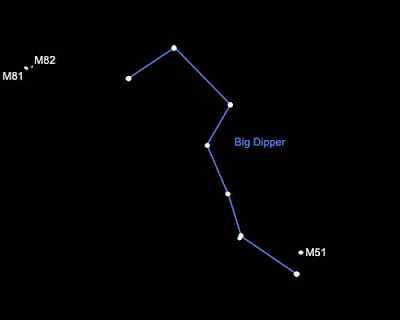 …the big dipper, normally riding along just above the northern horizon,
now directly overhead.
Posted by Leenie at 10:10 PM 7 comments 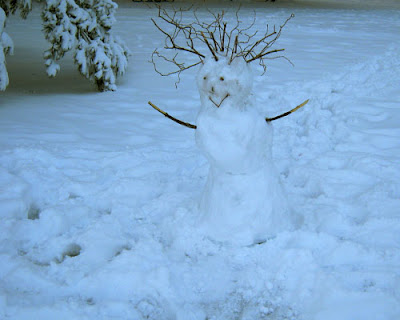 The great thing about living in a college town... 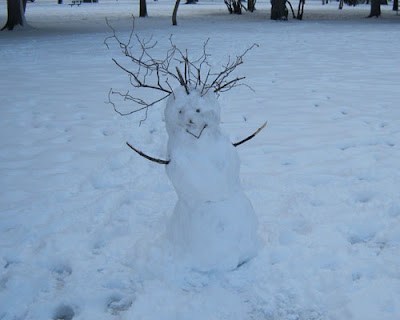 ...is that there are so many creative people.
Posted by Leenie at 4:05 PM 13 comments

Every office I’ve ever worked in has at least one perky lady who owns a little fuzzy pet, wears sparkly earrings, and knows everybody’s birthday.  When the calendar reaches the middle of November (and especially if we’re blessed with snow at the same time), Miss Perky gets all excited to hear all Christmas music all the time.  She even has a stack of CD’s in her car so she can hear fourteen different versions of The Little Drummer Boy.  Every office has one.
The office radio is turned to an all Christmas music station as soon as we are back from Thanksgiving and we all get to listen to hour after hour of the following playlist:
Holly Jolly Christmas—Burl Ives (Oh, by golly have a holly jolly CHRISTMAS –mm-this YEAR.)
I’ll Be Home for Christmas—Bing Crosby (…if oooownleee in myeee DUH reems)
Rockin’ Around The Christmas Tree—Brenda Lee (in a new—old—fashuned WAY!---b’dawr b’dawr b’dawr!)
Merry Christmas Darling-- Karen Carpenter (I’m Christmasing with yeeeeooooo).
Chestnuts Roasting—Frank Sinatra
Some peppy orchestra rendition of Sugar Plum Fairies
Blue Christmas—(you guessed it) Elvis (ah-ll h-ave uh-h blahloo Christmas)
Silver Bells -- Johnny Mathis (It’s Christmas tiiiiiyeeeem in the city)
Carol of the Bells—Manheim Steamroller (just shoot me!)
Sleigh Ride by another energetic orchestra with that trumpet whinny
Away in a Manger—John Denver (Nooooooo!)
Feliz Navidad—Jose Feliciano (from the bottom of my haaAhaart)
And don’t forget Santa Baby by Madonna. 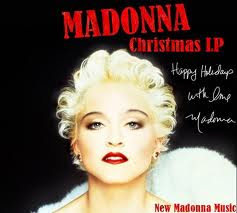 Actually, I kinda like that one (…an out-of-space convertible too, light blue, I’ll wait up for you, dear …think of all the fun I’ve missed! Boo doo bee doo!)
When they’ve all played; they play again.  Then I go out in the parking lot and hear them AGAIN.  And just in case I've forgotten in the short drive to the gas station more Christmas music is coming from loud speakers there.  And in every-single-store more Christmas music.
It tends to make me cranky.  Thank heavens I have this blog where I can vent.  It saves a lot of money on therapy.
Did you hear about the lady who died while ice fishing?  She was run over by the Zamboni machine.
Why do the three wise men wear fireman hats?  Because they came from afar.
Posted by Leenie at 4:09 PM 15 comments