With only a week to go until the first campers arrive, DH and I have found ourselves learning new skills and trusted with some unfamiliar equipment.  But first; an update on the renovation of the main lodge of the summer camp. 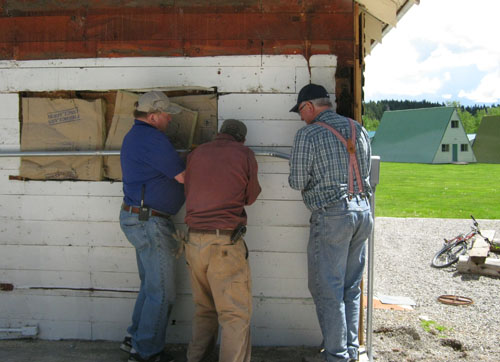 This is Black, Brown and Beck ripping off an old wall of particle board that had been marked by a skunk years ago and still retained its “Eau de Pepe Lepew.” 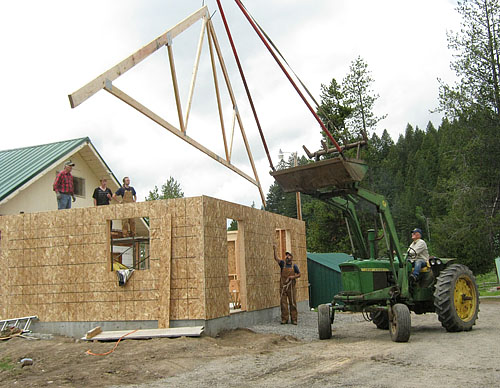 A couple of days ago the construction advanced to adding the roof trusses. 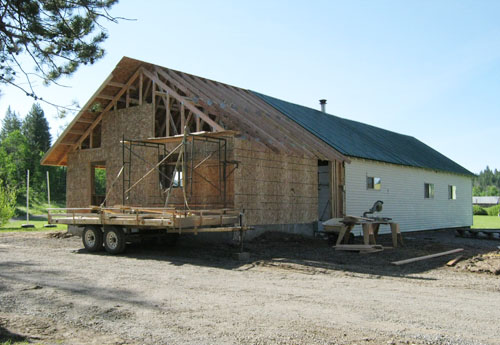 This job has gone quickly and very well, and a lot of the work has been done by volunteers. 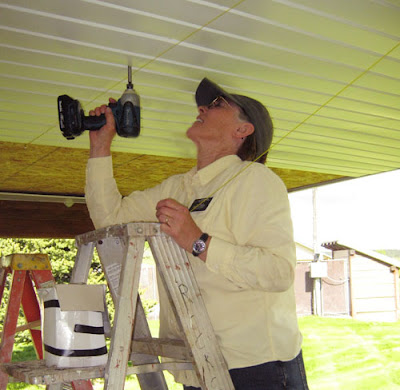 The other day, DH and I went to work repairing the ceiling of a porch that was damaged during the winter. 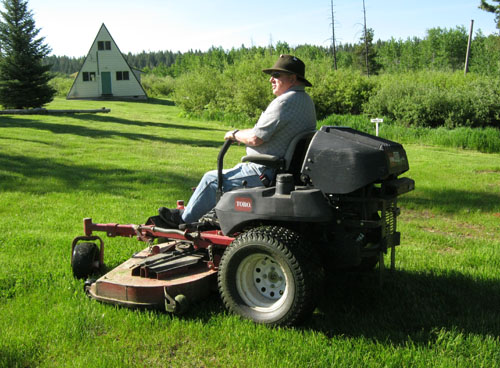 Then DH was given the assignment to take the big mower to a huge lawn that was growing at double speed with all the warm weather and rain.  They also needed someone to drive the smaller mower around in areas where the big one didn’t fit. 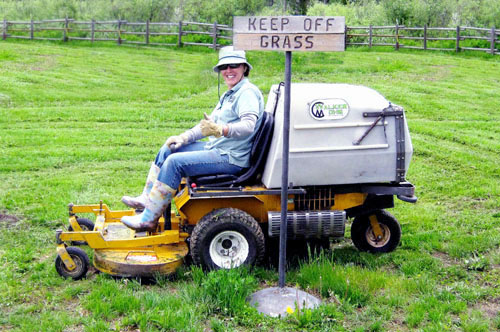 Desperate times call for desperate measures.  I suddenly found myself riding on a machine that has a mind of her own.  She bucks for a while when you first get in the saddle.  Then she tries to take the bit in her mouth and head for the barn.  If that fails, she runs under a tree branch to try and dump the rider. 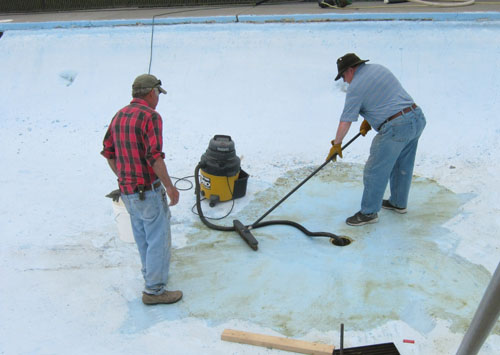 We also got recruited into preparing the pool for a new coat of paint. 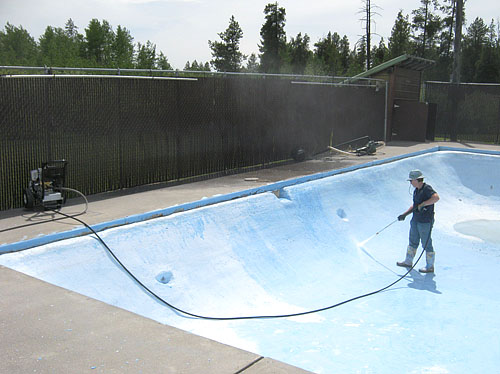 We got to take a brand new pressure washer out of the box and spend all of an afternoon playing in the water.  It would’ve been a lot more fun if the old water pump had been in working order.  We had to slurp the dregs out of the pool with a shop-vac and then bucket out the sludge filled with dirt, dead bugs and heaps of old paint chunks.

I think we’ll both look at cabins, lawns, swimming pools and a lot of other things with different eyes after this summer.
Posted by Leenie at 7:49 PM 4 comments

Last Christmas a gnome was sent to me by my friend, Linda Sue, who lives in Bellingham, Washington. 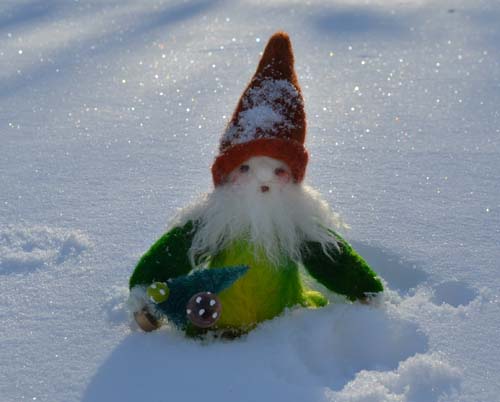 He was NOT pleased with our winter weather.  He pretty much sat in a corner and sulked. 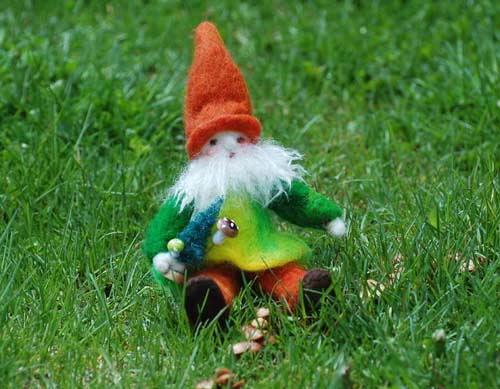 So I brought him to camp.  He cheered up and even told me his name.  He is Billy N. Hamish, or just Hamish. He doesn’t seem to mind posing with wildflowers and appeared happy to go with me on a walk around the area to see what was blooming. 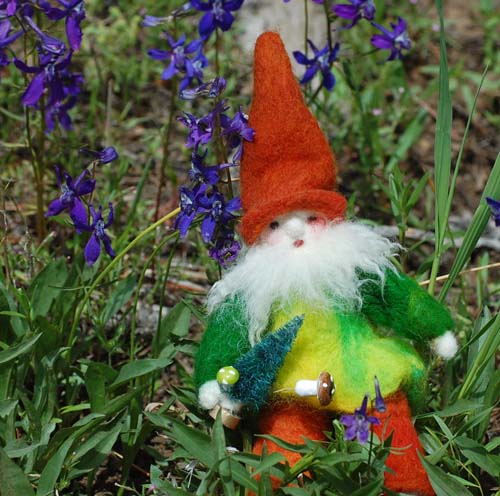 Right next to our camper trailer we found a bunch of pretty purple-blue flowers. 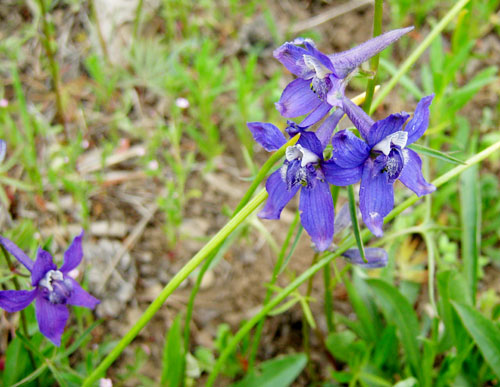 They’re called Larkspurs and are related to Delphiniums.  My book says they’re full of alkaloids and can be deadly to cattle who decide to make a meal of them. 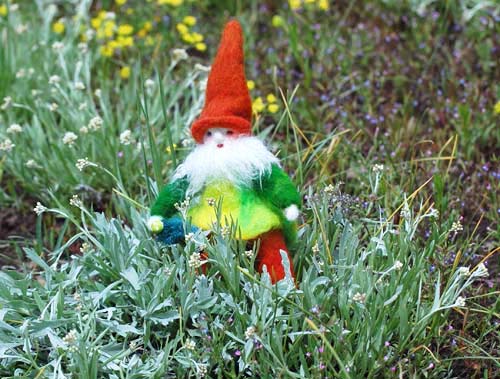 The spicy smell of sage brush floated up when I walked through this plant with gray-green leaves.
To me sage smells like rain. 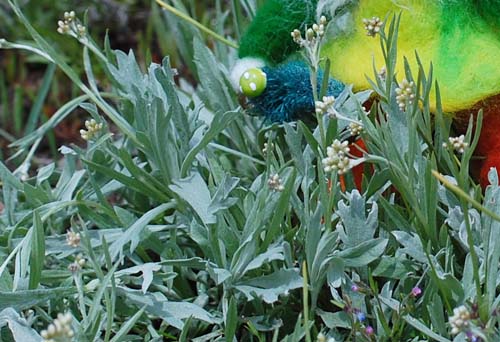 With the sage was a variety of Everlasting or Pussytoes.  They are claimed to be nourishing and pleasant tasting. I also found Wild Chives.  I tasted them and they would go nicely with sour cream on baked potatoes. 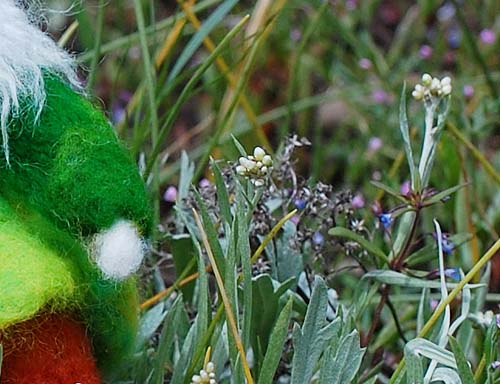 Next to the Pussytoes were tiny flowers of Blue-Eyed Grass. 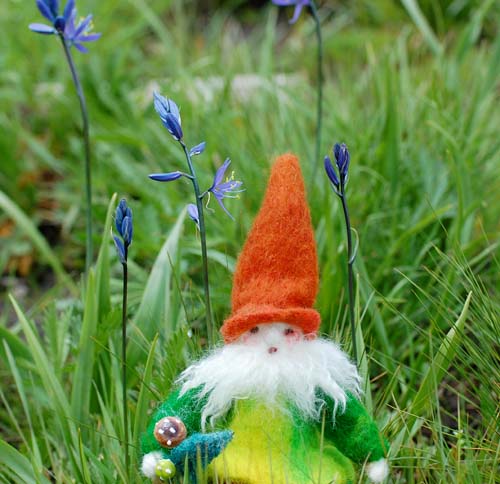 Down in a boggy area and I found a field of Blue Camas.   I recognized them right away since I have some blooming in my garden at home. 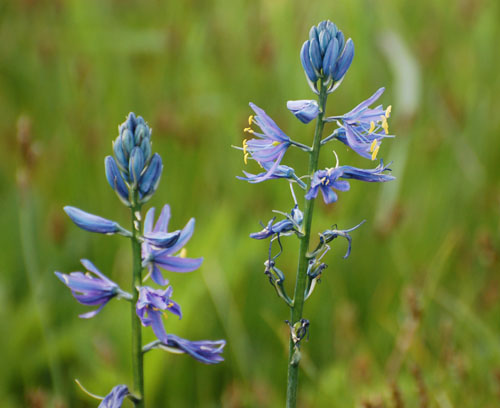 Camas was an important food source for Native Americans.  They taught early settlers to dig up the bulbs which can be eaten raw, cooked or dried. 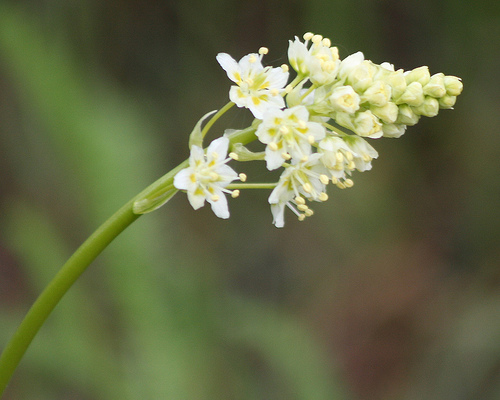 It is also wise to gather the bulbs when the plants are in bloom so they aren’t confused with poisonous Death Camas which has a white flower. 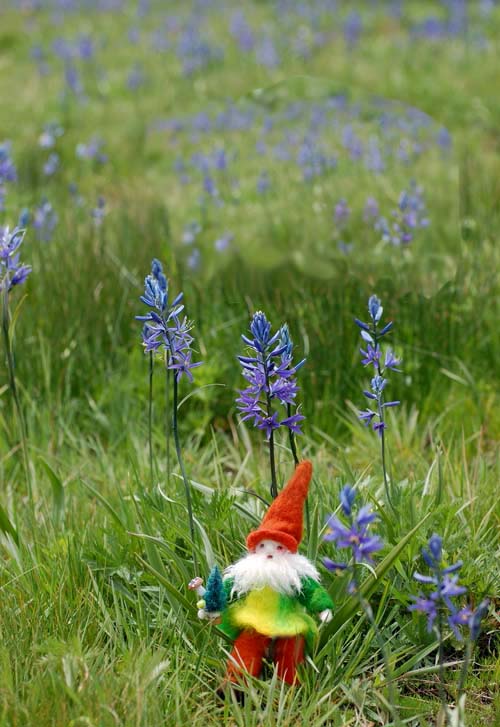 The Camas was growing so thick and was so blue that the meadow almost looked like a lake. 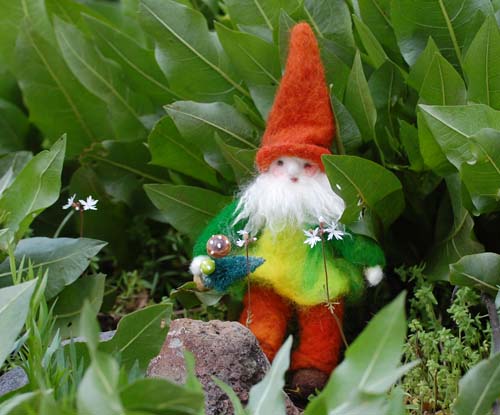 With some careful looking I found some small flowers for Hamish to pose by called Woodland Stars. 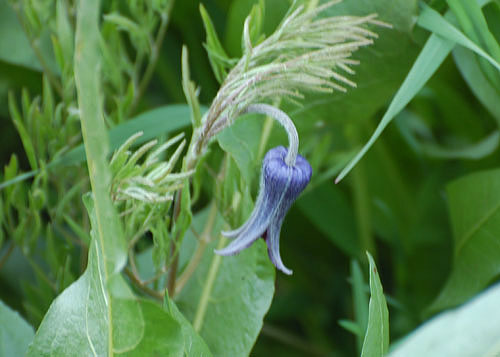 By now my gnome friend was bored and took a snooze in my camera case so he wasn’t available to pose with these members of the Clematis family called, Sugarbowl.  When they go to seed they grow long white hippy hair just like a lot of people.

The plan is to take Hamish with me to check out other wild flowers as they come into bloom during the summer.  I’m learning a lot but really miss not being able to find answers instantly on the internet.
Posted by Leenie at 10:30 AM 5 comments