A SERIES OF UNFORTUNATE EVENTS

I noticed a small water leak under our kitchen sink.  I put a plastic container under it to catch the drip.  DH said it was probably coming from the dripping faucet. 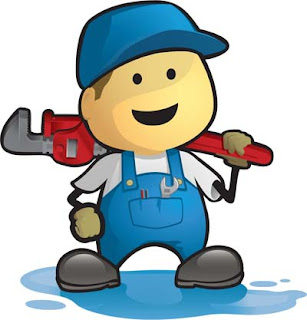 He took the faucet apart and saw the gaskets were worn.  None of the local plumbing supply stores carried gaskets that size. They could sell him a new faucet (ka-ching).

Soon he had the water off in the kitchen.  Things stored under the sink were all over the floor.  DH was on his back under the sink contending with plumbing.  He was finally successful in installing the new faucet.  It worked very well.

But there was still a small leak under the sink.  DH said it seemed to be coming from a gasket in the garbage disposal.  He went to the plumbing supply store, found a new gasket and replaced it.

But there was still a small leak under the sink.  DH said it appeared to be coming from the housing of the garbage disposal.  More stuff under the sink came out and DH removed the disposal.  Its whole base was rusted and there was a crack where water had been dripping out.

We went to the plumbing supply store and bought a new disposal (ka-ching ka-ching).  After much struggling and effort it was installed.  It fit perfectly and ran wonderfully.  While we cleaned up and restored the kitchen to order, I started the dishwasher.  DH said there was a possibility the leak could be coming from the dishwasher.  I told him to bite his tongue.  After the load of dishes was washed I looked under the sink.  Whew!  No leak.

And, then, since the kitchen had been out of commission all day, we went out to dinner--for tacos--and concentrated on the positive:  A plumber's bill for such a project would have been a BIG KA-CHING.  (ladies,when shopping for a hubby get one who is good with tools) PLUS the new faucet didn't drip and the new disposal runs so smooth and quiet.
Posted by Leenie at 7:45 AM 12 comments 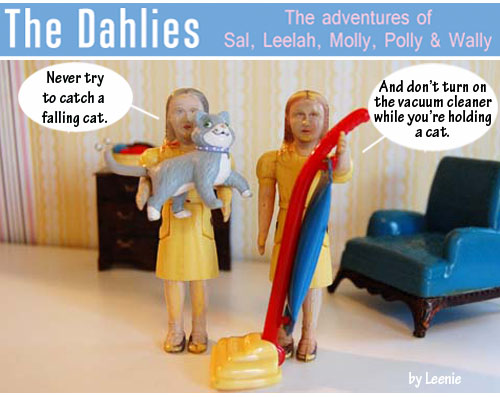 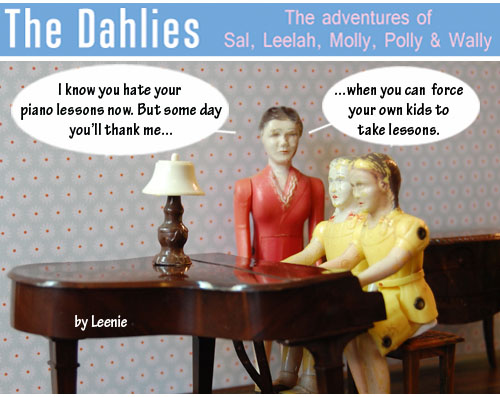 ☺  Why did Mozart kill his chickens?
Because they always ran around going, "Bach! Bach! Bach!"

☺  What happens when you play Beethoven backwards?
He decomposes.

☺  A note left for a pianist from his wife:
"Gone Chopin, (have Liszt), Bach in a Minuet." 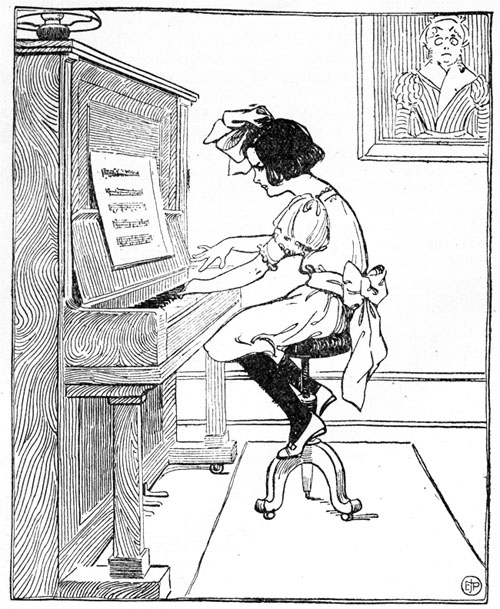 “Whiter than new snow upon a raven’s back.” (Wm Shakespeare)  Against winter snow a big raven is hard to miss.  The long black feathers on their bodies and the shaggy short feathers on their heads and necks probably absorb light and heat in the cold, cold weather of the . 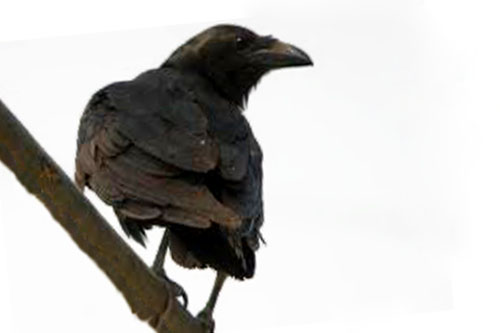 Bernd Heinrich’s book, The Mind of the Raven, says ravens mate for life.  According to Heinrich they chose their partners carefully, because the male raven must be a clever scavenger to provide for his mate and young.  Humans should be so wise.

Not only that, they raise successive young
and are often quite affectionate with each other. 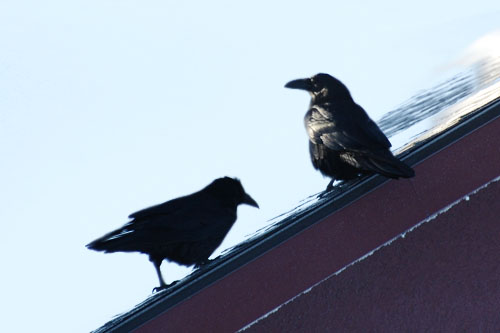 This couple was spending a morning looking for breakfast
and trying to stay warm in temperatures well below freezing. 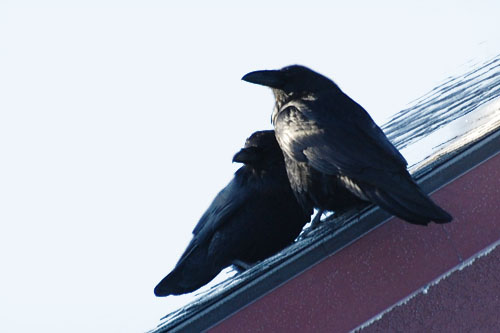 Finding a sunny spot on the roof they just decided to soak up the thin sunlight. 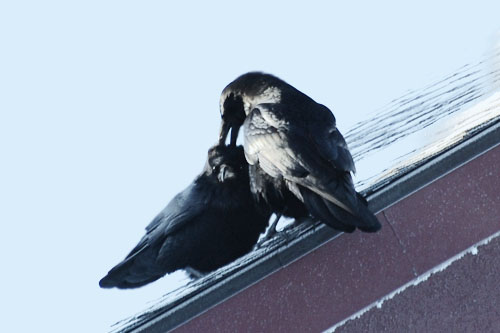 This progressed to grooming, caressing and mumbling. 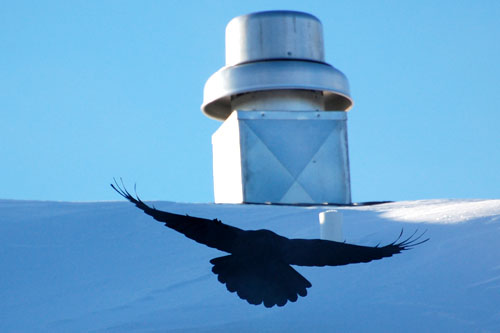 The sunlight moved so they looked for a warmer spot
next to the vent on the top of the roof. 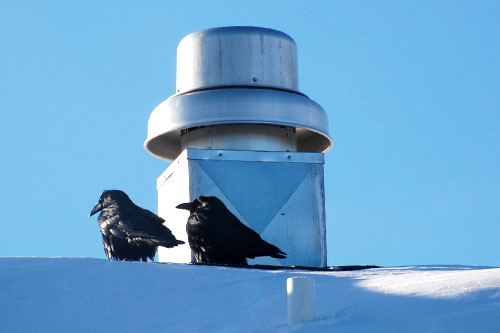 They settled down and fluffed up their feathers to keep their feet warm. 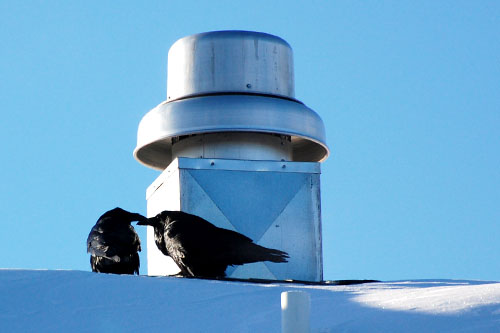 These two really care for each other. 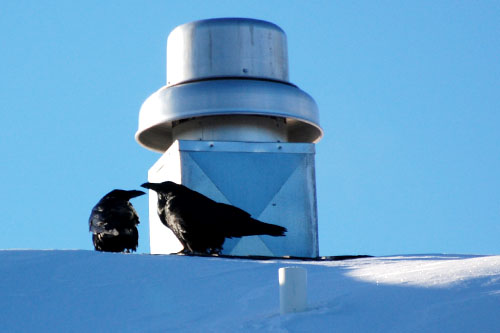 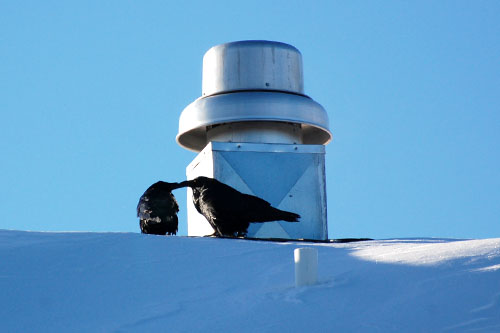