STARS IN THE WATER

The cool, still sea reflected a September night of the darkest blue.  No moon or other light was there to compete with the blazing stars wheeling over our quiet anchorage in the . Arching across the center of the sky, the Milky Way glittered like a rainbow left behind by a magician’s wand.

After a meal fit to please the most particular foodie, and an evening of pleasant conversation, the handful of passengers aboard the Motor Vessel David B had gone to their cabins.

I wasn’t ready to go below and was taking in a few more moments on deck to stare at the magical sky and listen to the silence.

Captain Jeffrey came up beside me with a crab pot tied to a rope and baited with a can of cat food.  It looked like crab would be on tomorrow’s menu. A glowing spatter went up as the crab pot hit the water. Christine had also come on deck and we both exclaimed at the bright but cool glow released by the splash.

We were seeing the effect of bioluminescent plankton.  Jeffrey pulled up the crab pot and again threw it overboard.  Once more, light was created when it hit the surface.  The living light was caused by tiny animals in the sea which gave off a chemical luminosity similar to the substances in a glow stick.

Again and again Jeffrey tossed the crab pot to produce the flashy splashes. 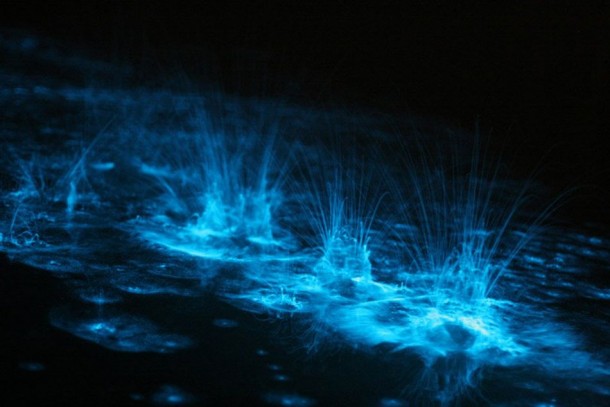 I was too astonished to even think of taking photos.  Fortunately I found several pictures of this phenomenon on a web site hosted by the photographer, Phil Hart. http://philhart.com/gallery/Astrophotography/Phenomena/

Here is a YouTube video I found as well.  It will probably be cluttered up with some ads but you’ll be able to see the brilliant splash created when the guys toss something into the water.  Then it’s replayed again in slow motion so you can see the Sorcerer’s Apprentice effect of stars in the water.

Click here to see what we found in the crab pot the next morning.
Posted by Leenie at 8:36 PM 5 comments

It was that winter when our three sons were still living at home and all were attempting to compete with Yeti in the hairy face/huge feet department. For some reason they had ended in a heap of elbows and knees on our bed to watch Monday night football on the tiny portable television.

I was finishing up some chores in the kitchen when Beavis burst into the room soaking wet.  It seems our old waterbed wasn’t made for three man tag team wrestling. Butthead and Bobert weren’t as soaked as their younger brother, probably because they hadn’t been on the bottom of the heap when the bed erupted.

The sodden bedding was pulled off and it looked like the waterbed was due to become history along with the Berlin Wall and the Exxon Valdez.  DH and I slept on sofas that night.

I put another load of blankets in the washer before I left for work the next morning.  DH and the boys were all on Christmas break and promised they’d take care of the bed problem while I was gone.

I returned that evening to find DH had purchased a brand new box springs and mattress. It was all made up with fresh bedding in our bedroom.

Bobert had repaired and taken possession of the waterbed.  This meant he had to move his new acquisition down the stairs in pieces and fill it after he'd cleaned and cleared a space out in the debris of his room.

Beavis laid claim to Bobert’s old double bed to replace the twin bed he’d been sleeping on. So he had clean sheets and a cleaner room as well.

Butthead had commandeered Beavis’ twin bed and had moved both mattress and frame all the way from the basement to the attic to replace the old bunk he’d been sleeping on.  I wasn't there to see how many times the burden rolled back down on him, but he'd achieved his goal. 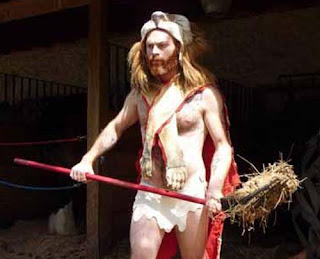 They all looked prouder than Hercules after he'd cleaned the Augean Stables.  I was amazed, pleased and properly impressed.
Posted by Leenie at 10:11 PM 9 comments