RUNNING DOWN THE STREET IN MY PAJAMAS

If you were out before sunrise on the west side of the United States this morning with a clear view of the horizon, you would have been able to see an occultation. This has nothing to do with black magic, but is an astronomical term for, “concealment of one celestial body by another.” In this case it was the planet Venus sliding behind a thin crescent moon. I often get up before sunrise to go for a walk or a bike ride. I have been watching the moon wandering between Jupiter, Mars and Venus in the early sky. Today was the day Venus and the moon crossed paths. I had my camera ready and went out to get a photo, only to discover the moon so near the horizon that I had to walk over a block for a clear view. I was in my pajamas and slippers and it was dark. It did not occur to me until later that I might have looked a little suspicious wandering around the pre-dawn neighborhood with a camera, dressed in my jammies. Fortunately, I did not meet up with the police like I did last time I was taking sunrise snapshots. 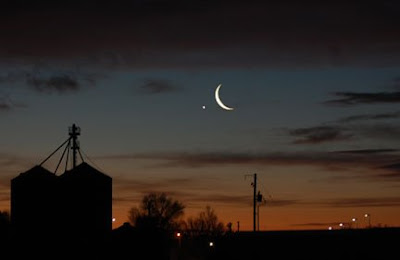 Venus was even brighter than the thin moon, and both were easily visible. The Steiner Castle, okay, ...really grain elevators, added a nice silhouette to the set off the event. In a matter of a few minutes Venus 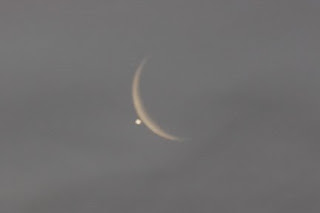 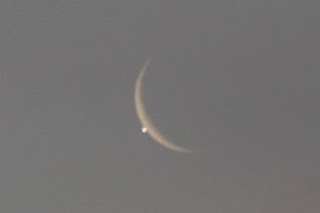 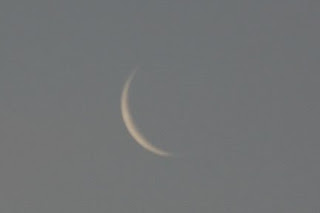 and disappeared behind the moon. I guess in California this happened enough before dawn that Venus could be seen coming out on the other side. It was certainly worth missing a little sleep to see!
Posted by Leenie at 3:16 PM

Very cool! Thank you for being there and taking such good pictures!

A whole lotta fun here Leenie, with your adventures with the camera. Beautiful pictures. Magical.

Leenie, what wonderful captures!! Seriously amazing! Thank you for venturing out so early to get them. And, thanks for the info about "occultation"...I'd not heard of it before.

I'm wondering what the "Steiner Castle" is. And, am off to read of your previous pajama/police adventure.

Have a wonderful day!

These super shots were certainly worth the neightbors wondering if you were odd!
You could always yell "Well, I'm a blogger!"
When we lived in Morocco we would often go up to the roof to look at the stars which is difficult here in NY.
Too much ambient light.

Wow - that is truly cool!! And a winning shot - I think the castle sets it off so well.

The "castle" is just a bunch of grain elevators---the closest thing to a castles in this part of the world.;D

I love it, and so glad you arose early. I let the cats out at dawn, but chose to retreat to my bed.

BTW
I often try to convince my neighbours in My Muskoka that I am odd. It keeps away the riff raff! The tourists are starting to come back, too, and spoiling my peace and quiet.

Thanks for visiting me and I'm glad I came round to your place. I love seeing the photos people take and share. I'll be returning.

WOW! That was amazing!

Leenie! That is fantastic ... wow! Like the others have said above, thank you for capturing these ... in your PJs no less!

Great pictures!!! My favorite is the first one. :)

I've always wanted to be an early riser but until now, the night person in me still dominates my sleeping schedule. Perhaps being able to take beautiful pictures before or at sunrise will motivate me?!? :)

Perfectly lovely shots. Thanks for bringing it to us.

Hi. Just wanted to say thanks for stopping in to view my blog and leaving a few comments...=) It is always great to have new visitors.

Your early morning photos are stunning! I love to get up early when I know there is an event to see or to stay up late to watch a meteor shower. Since I live in the desert, I can run around in my jammies and nobody will see...=)

Awesome photos, Leenie. For these, I would also walk outside in my pajamas :)
Thank you for dropping by my little room and your lovely comment. This is in fact a wonderful way to meet new bloggers with common interests.