These are two of my favorite paintings:

Langlois Bridge, and Fishing Boats on the Beach by Vincent Van Gogh Two more favorites are: 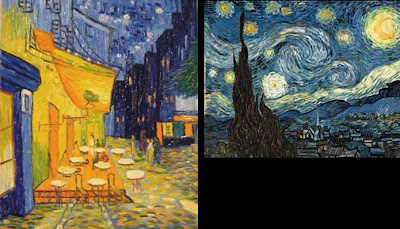 Terrasse Café, and, of course, Starry Night. Van Gogh liked to put sky blue together with creamery butter yellow. So do I. When we put steel siding on our house in 1990 we picked out a pale tan color. We had a steel roof put on as well. Steel roofs are great in snow country. Heavy snow comes off a steel roof like ice cubes out of a hotel ice machine. I picked out blue for the color of the roof. Our roof is REALLY blue. It stands out from the gray and brown roofs in the neighborhood so much (I'm not making this up) that airplane pilots line up on our house on their approach to our small airport. Over the years the constant wearing of ice across the steel wore the blue right off our roof. It was looking pretty shabby. Time to paint.
Even when there were heavy storms the guys didn’t have to get on the steep slick roof to shovel off snow. 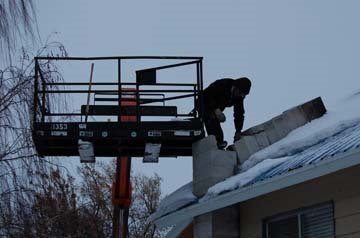 They didn’t have to get on the the roof that one time to remove the debris from the shattered chimney(I'd give a link to this story but it seems to be lost in cyberspace). But now I had visions of Hubby ending up head down in the shrubs with a paint bucket on one foot. 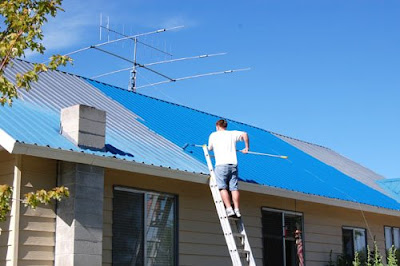 Fortunately our neighbor is a painting contractor. He let Hubby and Son borrow his extension ladder and an extension pole for their paint roller. The south side of the roof was painted in one day. 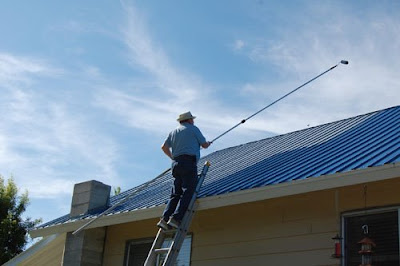 There were blue freckles on the sidewalk and some of the shrubs, but other than that the job went well; although the guys complained of “bird feet” from standing all day on the ladder. 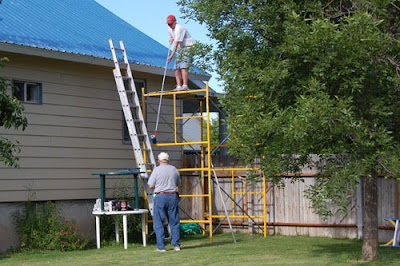 Hubby decided he wanted to build scaffolding to stand on to complete the other half of the job. He was talking two-by-fours and grabber screws when I insisted he check out renting what he needed. 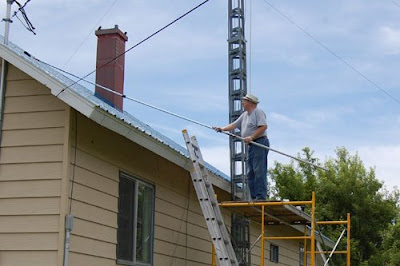 For twenty dollars they had easy-to-assemble light weight scaffolding for a whole day. They were almost through painting by the time I came home from work. 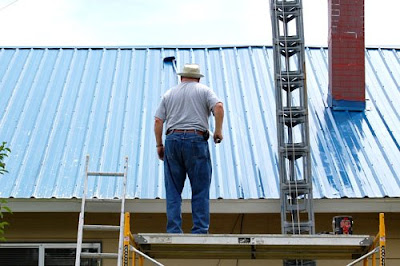 Now the airplane pilots can easily line up on the flight path to our airport again.
Posted by Leenie at 6:35 PM

oOOOOOOOOOOOOooooOOOOoooo!
That looks great... its nice what peace of mind 20 bucks can buy!!!
We will come and see your new color in a couple of weeks!!

I love the idea of a blue roof, and combining Van Gogh's favorite colors is genius. Funny that the pilots pick it out for their flight path!

So what does it sound like with a steel roof like that in the rain? Is it really loud?

Laura: We have a big attic that has a lot of insulation. In fact because of cold the whole house is so insulated that we can't even hear the wind. So the only place we can hear rain on the roof is on the porch.

Now there's a manly man! BIG job!! Tedious! How did he get the paint on the roller with the extension? Seems daunting to me.

You do realize that you can never change the colour of your roof don't you? Imagine all the poor pilots circling and not finding that lovely blue.

Those first two pictures appeal to me most.

Any immediate plans to replace the chimney, or at least extend a smoke pipe so it will draw?