WHEN THE VOLCANO BLOW

Landmarks for our area are these two hills. 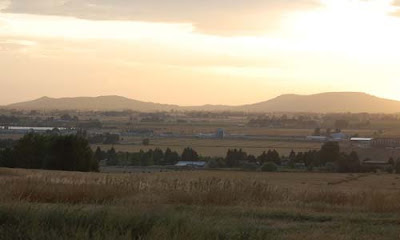 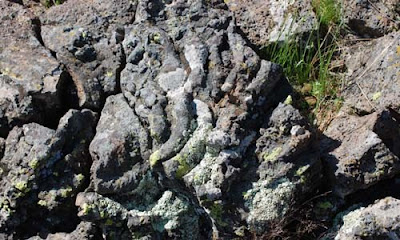 that some land near the extinct cones is still useless for agriculture. 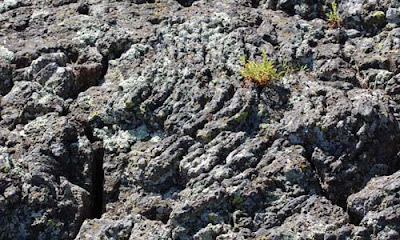 In fact there are extinct volcanoes in every direction of our part of the world. 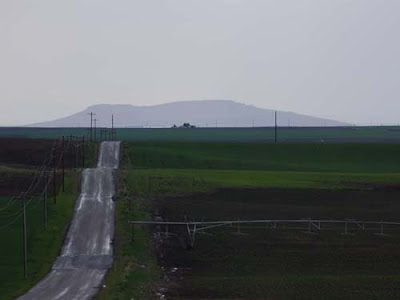 An hour north of here is a huge collapsed volcano called a caldera. 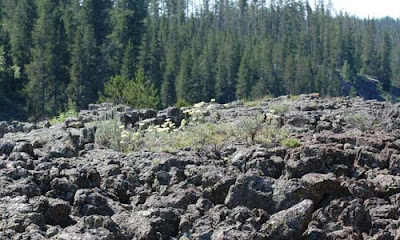 The edges of this piece of geology form Upper and Lower Mesa Falls. 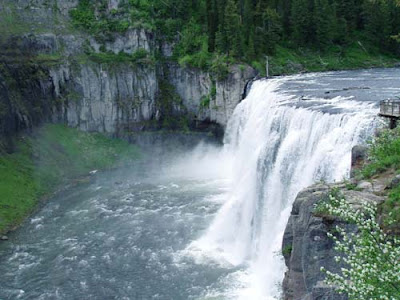 Of course, the mother of all active volcanoes is Yellowstone Park, just two hours away. The place is still steaming and spewing hot mud and water. Basically we are sitting on Pompeii. For me this is a good thing. If The Big Blast occurs, we will be so close to ground zero that we will not have to deal with the worldly aftereffects. Coming to a theater near you in November is a movie called 2012. It is another Roland Emmerich creation dealing with mass destruction. The trailers look like an overabundance of predictable clichés--landmarks leveled and none of the main characters die. 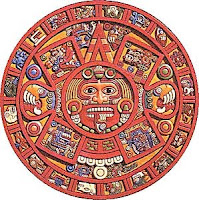 Hundreds of years ago the Mayans produced a calendar that is said to forecast the end of the world. This is supposed to take place December 21 of 2012. I have been to The Yucatan and I have a great deal of respect for the culture of the Mayans (a handsome Mayan named Marco fixed a flaming apple dessert for me—but I digress). Archeologists say the ancient Mayans never figured out how to make metal or even how to use a wheel. They played a ball game where the winner was slaughtered. I don’t have a lot of confidence in their ability to predict the future.
I guess the movie also points to the Bible as a reference for the exact date of The End of the World. Although there are lots of Bible references to the earth being devoured by fire, it also says that heaven and earth shall pass away but no man knows when, not the angels or even the Son knows, but only the Father. (Mark 13:31-33). 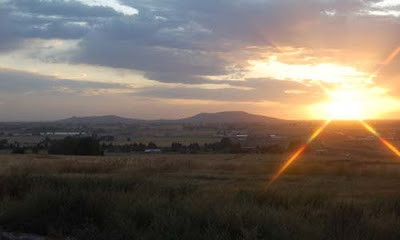 Columbia Pictures is banking on crowds of people forking over a hunk of their paycheck to watch a computer generated world explode. Perhaps we should be more worried about waking up the day after The Big Blast in a place even hotter.
Posted by Leenie at 8:32 PM

hmm.
Better book my world trip before the world blows....

Great post of familiar places. A recent National Geographic magazine had an article about Yellowstone blowing up. For the grant I am in charge of, we are trying to get Dr. Smith for the Univ of Utah, who was interviewed for the article, to come a present a seminar on the history of Yellowtone volcanos. I will let you know.

Recently we watched a 2012 special on the history cahnnel so of course I went to the source of all knowledge and wisdom- the internet...science is a wonderful debunker- yes the earth is changing, the moon drifts out an inch a year and our planet has shifted many times in it's existance...when Yellowstone blows we all go...not to worry may as well go in a blast of wonderment. Sounds like a great option to me. Anyway, I'm with you on the whole calendar of prediction thing...they als sacrificed children did they not? NOT trustworthy...I Love the geological structures down your way- Awesome land!

Hi Leenie - love your photographs. I didn't realise you lived in such a volcanic area.
We recently saw a series of three programmes on TV about Yellowstone - in Spring, Autumn and Winter. The whole series was absolutely fascinating - such beautiful scenery and wildlife. How lucky you are to live near.

Well, I think that some people will believe anything that is dished up for them. I guess it is easier that way, then they don't actually have to think for themselves (or try to understand the scientific method). It is scary how people see something on TV or in a movie or in a magazine, and simply take it as gospel truth. But just in case, I am going to fit in as much as I can before that dreaded date! (PS I am glad you like my salad. I was getting worried about you - how can you not like curry???)

Fascinating land formations.
I think/hope I will outlast the next end of the world.
Super pictures of a part of the world Ihave yet to visit.

You dont like curry either? So thats where I get it from.

I love it. Beautiful pictures! And just the perfect biblical quote. Peace.

Great food for thought. I'm pretty sure I'll be in the hot place no matter what, more's the pity.
Didn't know the Mayans predicted 2012 as the end... but as you say, maybe they're not the best source.
I kinda wish the disaster movie had picked an "end of world" date a little farther in the future. Besides, it's bad for DVD sales. Who's going to want to watch this movie in 2013?