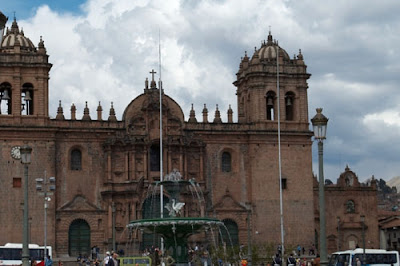 La Catedral in Cusco, Peru is a Catholic church built on the foundations of the palace of Inca Wiracocha.  It is made in part from stones from other Inca temples. There are two steeples filled with bells.  If you look carefully you can see the HUGE Maria Angola bell which hangs almost out of sight behind the other smaller bells. 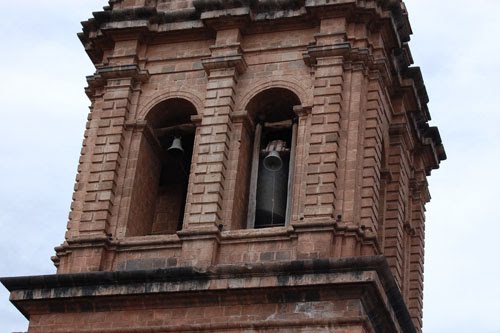 The bell was made in 1655.  It weighs about six tons and is over two meters high. It is said it can be heard twenty-five miles away and is the largest bell on the South American continent.  It is made of gold, silver and bronze.  When it was cast it had a partner--The Magdalena, which was dropped by workers during a storm at the edge of Lake Titicaca (241 miles-388km-- away), where the bells were made.  The people of Cusco now say the echos from the first peals of the Maria Angola each morning are actually the tolling of the Magdalena on the bottom of the lake.

Wow - what a story -I mean HIstory! I would love to be able to travel more. Maybe in my next life.

it's beautiful! i'd love to see it some day.

Beautiful church, bet it has a great atmosphere inside.

Wonderful photos - hope you'll play along this week - pop over to my blog to see which word I've chosen, regards Anne