The road between home and Yellowstone National Park is sometimes two lanes, and sometimes a four lane divided highway. On The Big Hill it is two or three lanes, but usually the center lane is for passing slow uphill traffic. The trip has no switchbacks, just a long climb or, if going down, a wild descent. This is especially true if the surface is icy and the shoulders are non-existent because the snowplow has filled the roadsides truck-high as it cleared the way. Plus there are the huge eighteen wheelers that rush headlong down The Big Hill with what seems like little regard for insignificant vehicles such as a small Subaru Impreza. This not a good place to get a flat tire.

But there I was at the wheel hauling down the hill when some gosh-awful noise started coming from the front and the steering wheel began to shimmy. I carefully pulled over close up against the wall of snow with almost no room to open my door without losing it to passing traffic, turned on my emergency flashers, and pulled the instruction manual out of the glove box to figure out what the heck to do next. 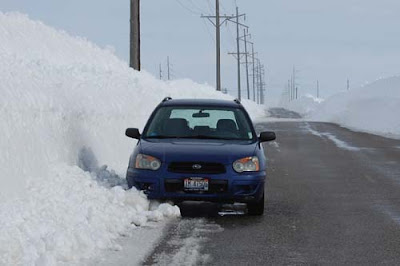 This is not the actual situation. I didn’t stop to take photos that day. The highway on The Big Hill is wider, but you get the idea.


I’ve changed a flat before. One time it was on our big old Chevy Nova. I was on my way to grandma’s house with a load of kids and no hubby. The tire went flat literally in the middle of nowhere. (There is a lot of that in south-central Idaho.) The kids were ecstatic for an opportunity to escape the car. They exploded out of the doors and ran off into the weeds. This was before the time when spare tires were the size of donuts. So the most difficult part of changing that tire was lifting the spare out of the trunk. 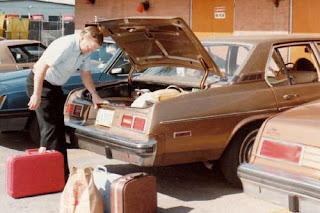 This is hubby loading the Chevy Nova. The spare sat deep in the trunk and probably weighed forty pounds.

Anyway, I changed that tire. A few cars passed during the incident, but the only one that stopped was driven by a kind lady who was smaller than I was. It took both of us to put the flat tire into the trunk.

Back to the flat on my Subaru: It was a challenge to find all the necessary tools. They were stuck in crevices and hidey-holes in the back. It was a real trick to discover where the jack was hidden. Meanwhile the big semi-trucks flew by in the passing lane flinging melted slush from their wheels.

Just as I was pulling off the hubcap a compassionate fellow stopped his pickup truck and came to help. Between the two of us we got the problem fixed and me on my way. I traveled the thirty miles on my little spare to my friendly neighborhood tire store with no problems.
Posted by Leenie at 1:41 PM

Thank goodness for friendly passer-bys! I have changed a flat - years ago when I had a sound back! However round here you are never too far from a breakdown callout.

I have three words for you- A...A...A...And a cell phone with them on speed dial. What a nightmare that could have turned to be! I am amazed that your sturdy dependable ride would have had a flat! Glad you are OK and that some one stopped to help. whew!

Thank goodness someone stopped to help!! I have never changed a flat tyre - although I know in theory how to do it .....

When I was growing up men would always stop and help a woman who needed a tire changed. Then my generation grew up and we became libers, bad bad idea.

I'm glad someone stopped to help you. I hope I never have a flat!

Having a touch of grey and managing to stand and look bewildered has come in handy at record shops and hopefully will be helpful if I ever get a flat.

I always travel with my cell phone because I haven't a clue about cars and tires and I will admit, I don't want to have to learn.

Oh, the flat tires. Truckers and pickup drivers are the best to stop and help. Glad you made it off the Big Hill.