It’s been a lot of years since I saw that tornado eat Dorothy’s house. The nightmares still surface occasionally. And I spend a lot of time scanning the sky. Now when I step outside (note the same evergreen tree on the right and left of the photos) and see clouds like this… 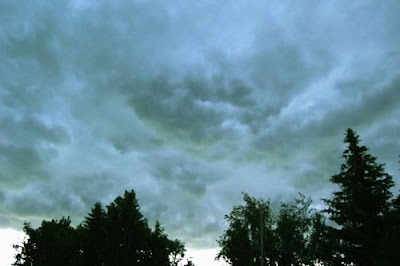 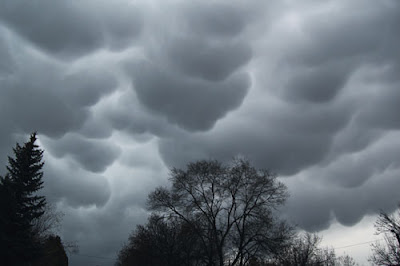 Mammatus clouds (aka breast clouds) “indicative of a particularly strong storm or maybe even a tornadic storm.” This system created havoc just south of us.
I take pictures--since photography now trumps phobia. Then I hurry to the basement and watch The Weather Channel.

DH has a different take on phobias. As he tells the story; his daily trip to first grade involved a short walk down a lane to the school bus stop. Along the way there was a home where a flock of chickens and a rooster lived. The rooster was a bully and delighted in flying out at DH and his sister as they walked by. He would flap and squawk with all his might which, of course terrified DH. His older sister decided the best defense was a good offence and proceeded to carry a worn-out broom on the way to and from the bus. When the rooster made his attack, Big Sis would haul back and whack him into his yard. This continued until the owner of the rooster invited the bird in for dinner. But by then the trauma of flapping wings had left its mark. DH developed a deep down fear/hatred for birds. 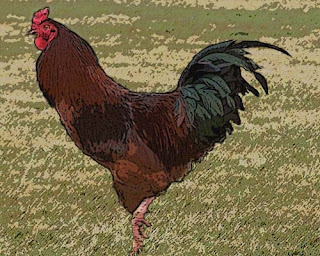 And alektrorophobia is the fear of chickens. That info thanks to Krista at Shades of Blonde .
Posted by Leenie at 1:17 PM

I couldn't believe it after mentioning the phobia of chickens how many people have come out of the closet! Ha! i loved your photos and your insight on the weather. Gorgeous picts!

scared of chickens is hilarious!Boob clouds- GREAT! They look like they are full of ice cream!

The broom story prompts me to remember a story I just learned of last week. Was it only last week? I was on the east coast and a beautiful soul of a waitress shared a story of her daughter tending to the morning regiment with the cattle. The bull, one of those long horned folk artish bulls (can't remember their names) thrashes about, always first to arrive. The daughter meets the challenge in hockey gear and with a hockey stick. HA! What a way to start the day!

Those clouds are something to shudder against and then to shutter. HA! I made a funny...kinda.

much love and thanks Leenie
xo
erin

My fear is of moths - and I don't know where it comes from. I must say though that I have never seen clouds like those in your photograph - I think they would make me afraid too.
We used to have a rooster who was a nasty chap - he was a little black bantam and was prone to landing on the back of your neck and pecking your head. They can be quite nasty = and would certainly frighten a child.