It was a dark and stormy night. DH was out of town and I was the only grown up (I was The Mom. I had to act like one occasionally) in the house. It was late and the kids were asleep when I saw the bat. It was flying its way through the rooms like a movie vampire. After chasing the creature for a while with a broom (no—no--not riding the broom, swinging it.  Sheesh!) I went to the fishing supplies and found the big net. A few swoops and I had the spooky little guy collected and released back to the rest of the children of the night. 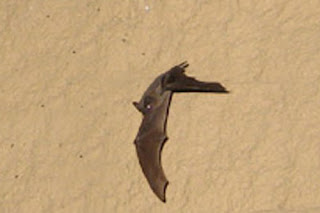 Not our visitor, but one like it.
This whole process was repeated a few years later except the kids were older and awake at the time. DH missed out on this one too. Our youngest son yelled and called for backup when the bat buzzed him. This time I knew to run for the fishing net. We followed the creature as it flew up the stairway to the attic room where Middle Son was deep into computer game-- headphones on; eyes focused on the monitor. He didn’t even look up when Youngest Son and I scooped up the bat as it fluttered overhead. Middle Son finally took note when we held the net full of winged blackness under his nose. Aaaaggghhh!!! Then we liberated the bat outside where he could continue his duty on mosquito control.


Chiroptophobia is the fear of bats
Posted by Leenie at 7:00 PM

you are so brave! we had a bat in our house a few years ago and I really just wanted to move. it took us a few days to locate and safely get him outdoors. I'm still traumatized by the thought of sharing my space with him. but I'm glad we handled him humanely instead of going with my instinct to just burn the house down.

Years ago I too had a bat in the house - and yes, Malcolm wasn't there! It was clinging to the wall paper in our bedroom. By the time I had talked to someone on the phone about what to do, it had vanished when I went upstairs again - I didn't sleep very well that night!!)

Bats are so cool- they are NOT vermin- When people see bats and snakes and things that have been demonized and the first thing they do is kill it are going to come back as bats and snakes- at least that is what I tell them...Thanks you for letting them go- of course you would! but you may come back as a rainbow trout...oh wait - that's the husband.My husband will come back as a woman married to him...

I had a bat in here last spring. I have no idea how the little bugger got in but wish I had your net! Eventually I just opened the front door and chased it with a broom until it flew out!

I'm so glad that you were brave enough to catch it and then release it humanely into the wild. I laughed when I read Curious Girl's comment - "my instinct to just burn the house down" - hah!

Wow, sounds like bats are more common visitors in homes than I ever knew. I had heard they were really hard to get out; but everyone here seemed to get them out while being freaked out but without too much trouble. I'm not sure how I'd react; first thing I'd do is probably put a hood or beanie cap over my head. Just so it wouldn't get tangled in my hair. I guess the next item we should buy is a fishing net! It will be nice to have two uses for it.

I went to the state PTA retreat for a couple of years and it was in a mansion of a cabin in the mountains. We had to make sure we kept the door closed so bats wouldn't fly in. It was terrifying!

It took me longer than expected to get back here- Gee, bats are a great topic for fall Leenie, ha..well it got your son's attention!
I have to agree with Linda Sue cause I know people even fret over spiders? She had me laughing about the trout remark thinking of my own husband (snicker). I've never seen a bat up close (San Diego Zoo as a kid) hmm? but I'm so fascinated with these marvelous creatures- great post here!