MANSION BY THE RIVER

There is a nest on a bridge over a nearby river.  It is not an ordinary nest. 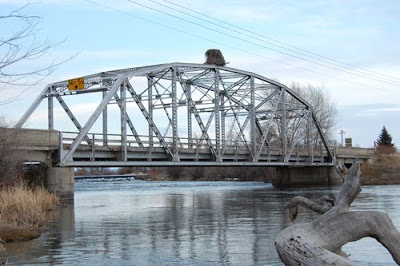 It is a mansion, or maybe a castle as nests go. 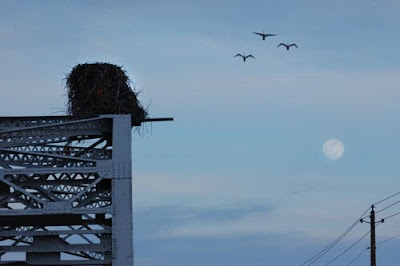 It doesn't belong to the swans flying by.  It's an osprey nest. 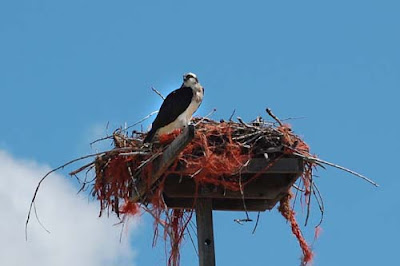 Here is the neighbor's nest. It's a starter home on a platform constucted to discourage nest building on the cross beams of electrical transmission poles.  Big nests on power poles are bad for power lines and birds.  The red fibers are plastic twine from hay bales recycled by the osprey into nest material. 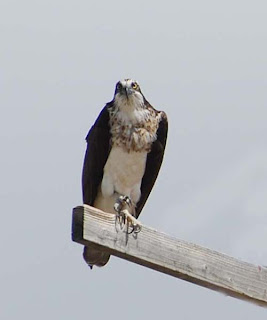 According to Wikipedia the osprey's diet consists almost exclusively of fish. 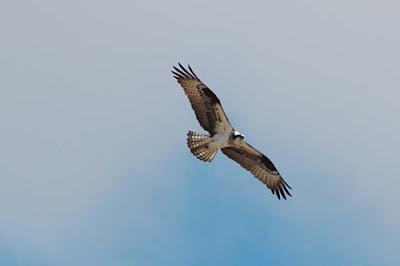 "Its toes are of equal length, its tarsi are reticulate, and its talons are rounded, rather than grooved. The Osprey and Owls are the only raptors whose outer toe is reversible, allowing them to grasp their prey with two toes in front and two behind." 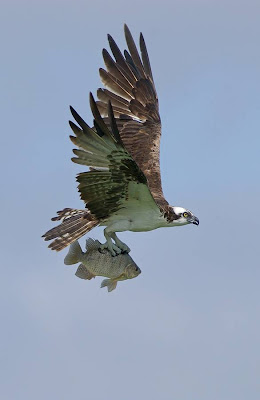 This is particularly helpful when they grab slippery fish.
All photos are mine except the last one.  This is from an amazing series of photos posted here.
And worth checking out the fight between an osprey and an eagle.
Posted by Leenie at 8:27 PM

Nice shots of the Osprey Leenie! I will be looking for another Osprey nest to photograph in the next couple of weeks.

Thanks for the link back to my post but my blog has moved to a new location and that post is located here:

Leenie I loved this Osprey post on so many levels. First thought was "big nests on power poles", those birds are sure into the power trip, and that last photo! What a beauty!That fish! Can you imagine the perspective from an underwater sea dweller? "Maannnnn" thinks the fish "Who could ever have imagined!!!".Forgive my silly enjoyment, but wonderful enjoyment nevertheless!Thanks.

Super photos! A twenty year-old osprey has just come back to her nest, which is big news, as they don't normally live anywhere near so long!!

I looked at that last photo and actually said out loud, 'NO WAY' I was going to have to hate you for taking that, till I read underneath :-) Now I hate Larry instead hehehe But even still the ones you did take are incredible and this post reminds me of a friend I have who works in a building right next to a river in Wausau and she says there is an Osprey nest there too. I'll have to go there and see if I can get that picture of one flying with fish in claw; or one similar. This is exciting I'll have to venture out a little more often if it means seeing something like this post with the naked eye...WOW

The nest n the bridge looks scary and amazing- If I were an Ospry guy I would want to marry her- she keeps a great house right over the food source- the fish photo is hilarious- I am not sure why but it cracks me up! Flying fish- "uh oh- this can't be good but it is totally awesome!"...oh, I am bing taken out for dinner..."Osprey- never seen a nest like that!

That nest is huge!

Super photos - in the UK Osprey nest locations are frequently closely guarded secrets often guarded 24 hours a day to protect eggs and young birds from collectors - it would be a bit difficult to keep these two secret!

FABulous!
This looks like a nest that I've seen in St. Anthony. Could it be?

Love the second photo - love it! Those osprey birds look like very special birds in their mansions. Do they have chandeliers? Being so near an electric supply and all? Hmmmm, they can keep their fish. You'll see on my blog post tomorrow why ..