IS THAT A CHICKEN JOKE? 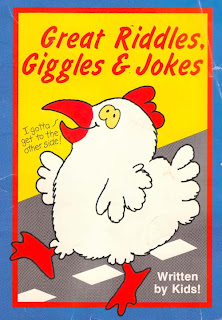 It was a lazy Sunday afternoon and a five-year-old, and eight-year-old and I were hanging out in the living room reading from a joke book. Some jokes were not funny. Some were sort of funny when they were explained. But some sent us all into giggles; and then a retelling just to see if they would be funny again (some were). I realize this is a “You hadda be there” situation, but these are ten of our favorite jokes and riddles.
1. What do you call a cow with no legs? Ground beef.

2. What did the dog say when he sat on the sandpaper? “Ruff!”

3. (This one is funnier because two of us share a name) Knock, knock. Who’s there? Eileen. Eileen who? Eileen on your doorbell but it doesn’t ring.

4. Knock, knock. Who’s there? Gorilla. Gorilla who? Gorilla me a hamburger, I’m hungry.

5. What letters are not in the alphabet? The ones in the mailbox.

6. Why can’t a bike stand up by itself? Because it is two-tired.

7. Why did the duck cross the road? It was taped to the chicken.

9. What goes “oom oom”? A cow walking backwards. (this one was probably hilarious because I looked so funny saying “ooooom ooooooooom.”

10. What is a twip? What a wabbit takes when it wides a twain.

Hope this at least made you smile.

And, you may not want to admit it if you know who said, “Is that a chicken joke?”
Posted by Leenie at 2:37 PM

hahaha...some of those did make me laugh. Especially the bike one... two-tired. That's hilarious!

Oh, these are too cute!! You must of been funny too. I'm sure that was most enjoyable- would of loved to see the faces..thanks for the light-hearted share!

Good jokes!! My son used to tell us the same knock knock joke over and over
knock knock
who's there
mac
mac who
macaroni

You're making such happy memories too, as well as making each other laugh! Children have such lovely giggles!

Oh,thank you. My kids will love this. There always looking for some new joke to take to school with them.

Boy did that bring me back to all thos Elephant jokes and knock knock jokes.

Yep made me smile! Thanks for that. I'm going to copy these and send to my nieces and nephew. I think they will like them too.

Window On The Prairie said...

My favorite is the one about the cow walking backwards. Oooom ooom. That also is the sound cows make to their newborn calves. Such a nice sound to hear.
Suzanne

I love the mailbox joke!

Do you know the interrupting cow joke?