THE PARADE, THE PARK AND OTHER THINGS

The twenty-fourth of July is a state holiday in Utah.  It is the commemoration of the day in 1847 when pioneers reached the Salt Lake Valley after two years of travel by covered wagon from the banks of the Mississippi River.

Salt Lake City celebrates big time.  Thousands line the streets to watch The Days of Forty Seven Parade as people march by dressed in everything from frontier garb to kilts.  There are elaborate floats, beautiful girls, dignitaries, politicians, marching bands, posses of tricked out horses with riders in full gear, plus more and then some.  It is one of the largest and oldest parades in the United States.

Instead of joining the throngs in the hot city we drove two and a half hours to Logan, Utah to celebrate the day with family there.

Logan's parade was an excellent one. 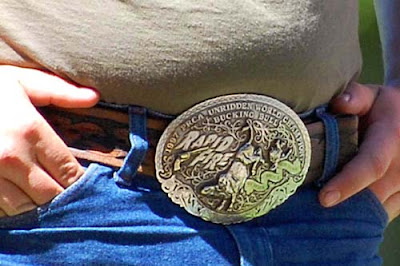 Descendants of frontier stock gathered along the route with their families. 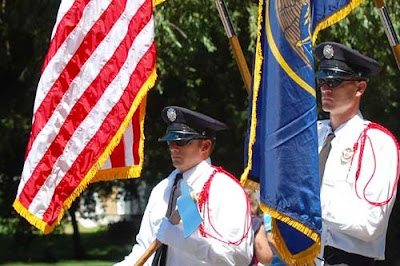 The color guard was made up of the local volunteer fire department. 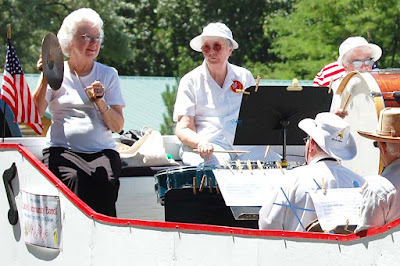 Members of the community band 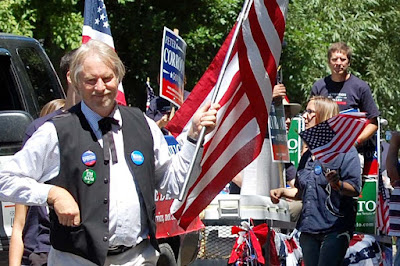 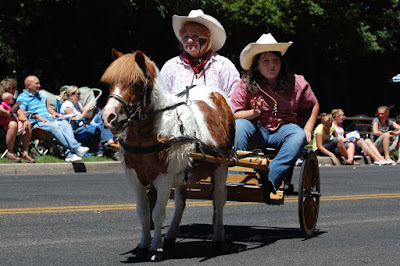 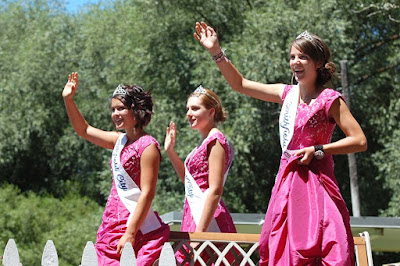 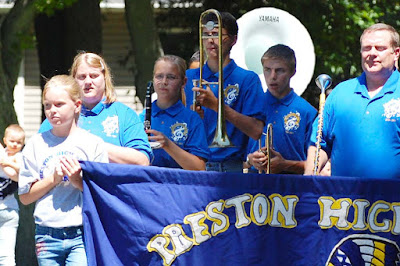 And the marching band from Napoleon Dynamite's alma mater. 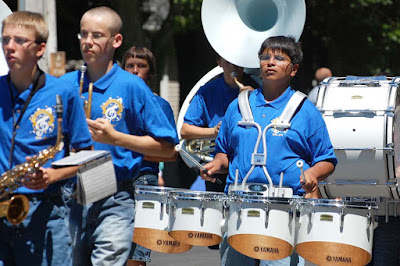 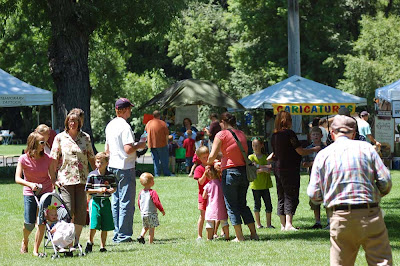 After the parade we followed the crowd to the shady park for more fun. 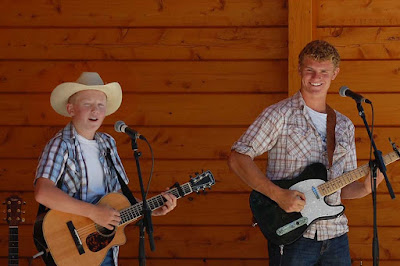 The Fuller Boys were there to entertain us with a full show of cowboy music. 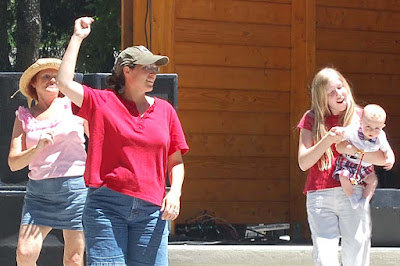 Everyone was invited to join them in a  yeehaw rendition of  "Boot Scootin' Boogie." 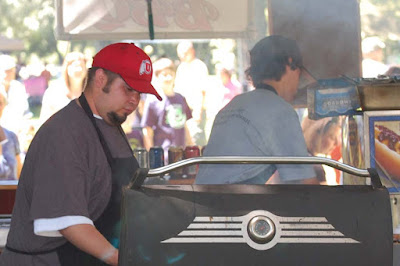 The air was filled with the smokin' flavor of barbecue. 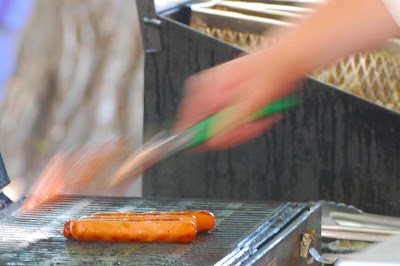 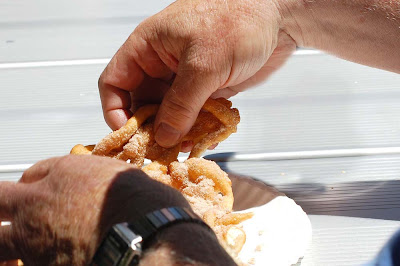 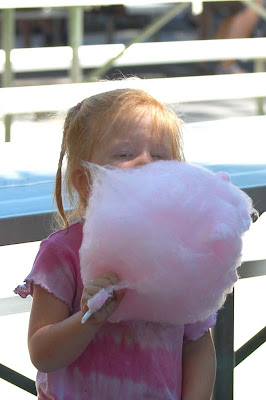 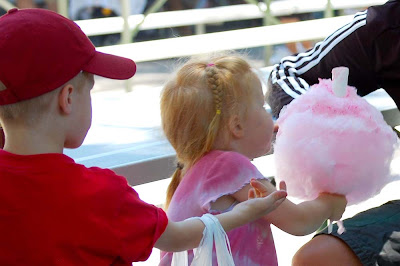 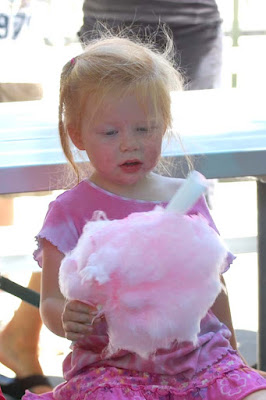 Even if it WAS a little overwhelming. 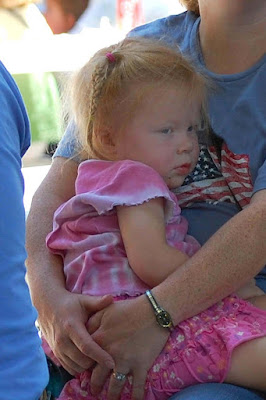 To make a long story--
which would include the part about me winning at Bingo, and coming in second in a bubble gum bubble contest--
short (sort of) we had a terrific time.  The day ended with more food 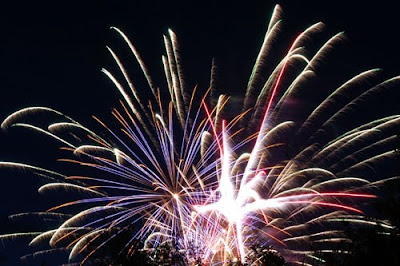 Alright! Now that looks like a summer of fun. Thank you for spreading the joy.

Great to share your day out Leenie, looks like an all American occasion. Love the little ponies.

What a great day! I'm with Her Majesty on the subject of cotton candy - just too yummy to share. We don't do summer parades and post-parade fun in the UK like this and it's a shame 'cause it looks like such a lot of fun!

Oh my goodness..this looks so wild and historical Leenie! I think this is an excellent historical post. When I scrolled and read about the fun music, somehow I knew a barbecue was next? I like to avoid crowds, so this looks worth the extra drive. I had no idea as I'm sitting around here Saturday afternoon! (Lol). Hey, I left two new links below the photos on my last post pertaining to your question about the butterflies- wished I'd thought of it first?

So Glad you came, we all had a lot of fun, I should have gotten some pictures of you in the bubble blowing contest. Sorry we missed saying goodbye this morning.

What a fabulous day out - sure beats our Common Riding events!!

What a lovely celebration. Her Majesty looks wonderful with her pink cotton candy. Good thing she has a 'throne' to sit in when she gets tuckered out.

Who can? Amer-can! Great account of a day inland in the wild west- ish! Is the buckle that size to deflect gunfire?

Wow!
This was a classic post.
I think you live in a very different part of the world than me.
This is what is cool about blogging -- much better than penpals because you can visit other people and see what is going on.
What a day.
Showed Robert the photo of Napolean D's marching band
A young Napolean on the left?
our entire family can recite almost ll of the movie.
Wish you could ship the food in this direction.

Buster says the ponies are cool.

Elizabeth: After a second look I think you're right about the guy on the left being either a young Napoleon with a buzz cut, or his little brother. hehe

Preston, Idaho even has a Napoleon Dynamite festival. At least they did for a time after the movie came out. Put them on the map in a goofy sort of way.

This sounds like such a great day! All your pictures really give a flavour of it. I love the one of the little(but presumably very strong!) pony pulling the little cart with two passengers. Two years in a covered wagon is some achievement.