My parents spent their life and their health working their farm in .  The days were long and they never were rich in any material sense of the word.  Although for our family there were blessings beyond measure.
After we children were raised and some of the loans were paid off Mom and Dad were able to take a few trips around the country.  They often traveled with other farm people to other farm places.  On one of these trips they brought back a little whirligig. 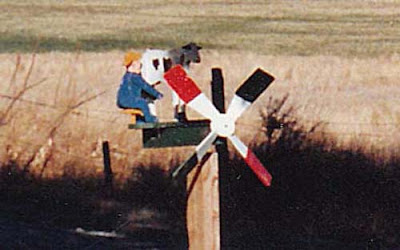 Whirligigs are toys with moving parts that are set in motion by a propeller.  They come in many varieties and were originally created by rural artists out of wood and painted bright colors.
This particular one was in the shape of a farmer with a black and white cow.  When the wind spun the blades, the farmer’s hands would go up and down as if he were milking the cow.   The harder the wind blew the faster he would work. 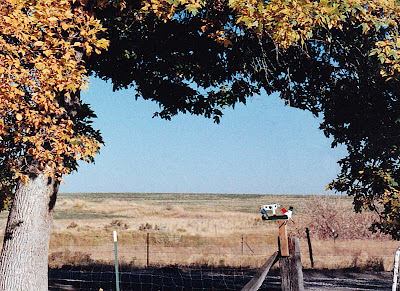 Dad mounted the whirligig on their gate post.  There the farmer milked his cow any time the wind blew.  When my folks sold the farm and moved to town the dairy man and cow came along.  Dad set it up on a fence post at their new home just a block away from our house.
The winds here can be fierce and it wasn’t long before a blade snapped off the propeller and the whirligig ended up on Dad’s work bench.
Then Dad passed away and, two years ago, Mom went as well.  When I was emptying their house I found the whirligig buried under a pile of tools and rags in their basement.  The paint was almost faded away, but it looked like it could be fixed.
I asked DH to make a new blade for the propeller and I found pictures online from places that made the little pieces of folk art so I could restore the paint to its original colors.
Most of the web sites also had a note that said, “All whirligig designs are out of stock and no longer available.” 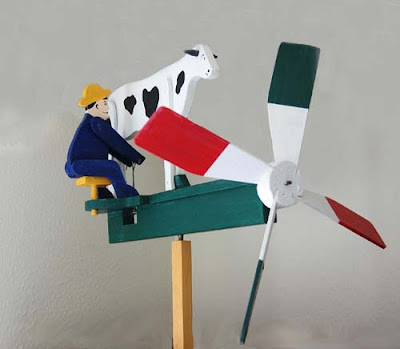 The little dairy man and his cow are now repaired.  But they are also both retired.  They have a place on the top of my bookshelf where the only winds they have to deal with come from a nearby window.
Posted by Leenie at 7:10 PM

Leenie, that whirligig is delightful. I have to confess I teared up reading this lovely post. I'm sorry for the loss of your Mom and Dad, but how lovely to have a part of the farm close-by to keep all those fine memories close...

Your photography is stunning. It just draws me right in. Beautiful.

What lovely memories to have - and your restoration is lovely. I've seen similar things here - perhaps with ducks whose wings flap when it's windy!

I'm so glad you were able to repair it. Things like that are such a comfort. I have my few things that connect me to my mother who passed 13 years ago. They hold my hand and pat me softly and let me know that she is still close by in spirit.

Oh I loved your story- this was really touching yet sad. I'm glad you had such warm memories! So basically, it was the blade- but you took care of that..and the paint (finding an exact or close match)? At least there wasn't more you had to get. I'd probably tuck it inside too-
Speaking of trees- that is fabulous! It looks like it was trimmed or grew into a beautiful arch!

Looking through, I realized on your previous post just how gorgeous the mountains really are from that view! Oh- I enjoyed your thoughts on my last post as well..the trees & roots! Me-

Beautiful! A tribute to your Mom and Dad and a heartfel reminder of love.

Perfect way to keep the memories as fresh as the new paint.

Lovely memories Leenie, and love your cowman - here's to his long retirement.

Such a wonderful treasure to bring back to life- - whirly-gigs have been popular out in the county and in farmland up here ever since ever. They are endearing...and hard working, just like your folks. What a sweet find in your Dad's basement...Glad you didn't let it go.

I LOVE WHIRLYGIGS! I've loved them forever -- how lucky you are to have one that is not only full of its inherent wonderfulness, but also brimming with wonderful memories as well.

I am so glad that you were able to fix it!

What a beautiful story and a lovely thing. I am not surprised your mum and dad took it with them when they moved. It is so lovely that it is restored and safe indoors after all the hard work it put in over the years.

I'm sorry to hear of your parent's passing, so shortly ago. Mine are both gone as well.

What a wonderful memory you have in that whirlygig. I'm so glad you were able to restore it.