I’ve mentioned before that my Dear Hubby is an avid ice fisherman.  I blame it on his Danish heritage and complete idiocy—whichever comes first.  Both traits must be genetic since his sons will also spend hours on a frozen lake in temperatures cold enough to freeze eyeballs solid, just so they can come home and gut fish.
They always have stories to tell about the ones that got away.
However, Beavis proved they don’t always get away 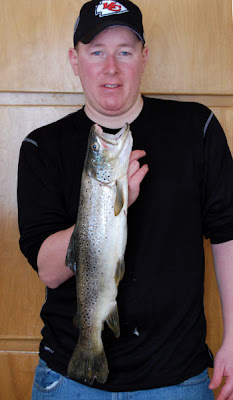 when he brought this one home last week. 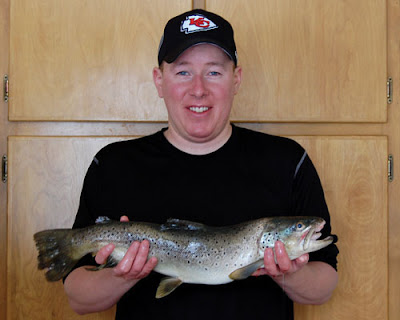 It’s a four pound brown trout that measured twenty-three inches long.
The guys also tell stories about feeding eagles.
Most of the time the fish they catch are rainbow and brown trout.  But occasionally they hook a white fish.  Some people like fresh water white fish, but these guys don’t think them worth the trouble so they toss them out in the snow to be eaten by scavengers when they leave. 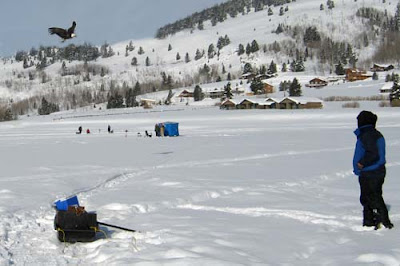 I guess an eagle or two appreciate the easy meal and now show up out of nowhere when the whitefish are tossed.  I’ve heard the stories about their “pet eagle.” So I finally got DH to take a camera and get photos. 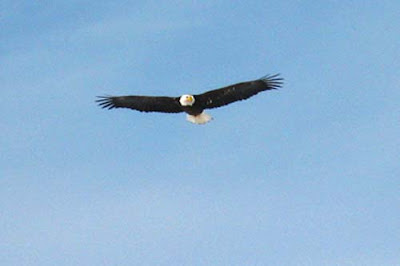 Apparently these eagles watch for the tossed white fish. 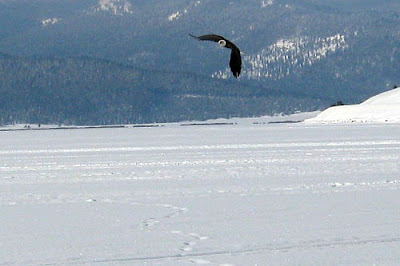 They come cruising in to check out the fresh meal in the snow. 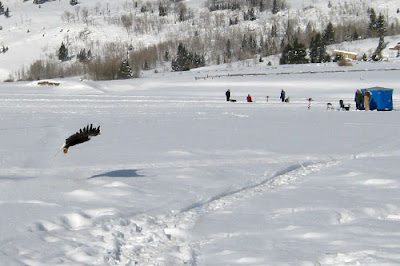 Usually they can collect the fish and fly off without missing a beat. 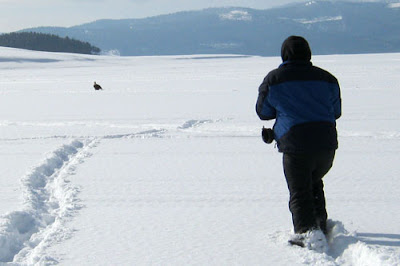 With an eagle eye on the people… 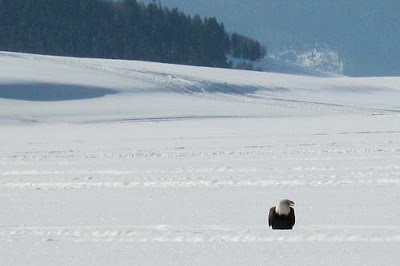 they enjoy their lunch. 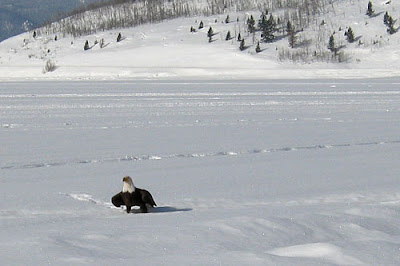 I’d say they have the fishermen trained pretty well.
Posted by Leenie at 1:00 PM

Now THAT is cool!

I think it would be worht the cold and boredom(I imagine but that's just me!) of ice fishing just to see that eagle in action! Great photos by your hubby. I have watched videos of smelt fishermen-they fish at night and have huts that almost look cosy. But smelt are so small whereas at least your family's spoils are a good size!

that is just AWESOME!! Here in Florida we have an over abundance of Ospreys. I love to watch them fish!!

It's a rare sight to spot an eagle, though, we have them near Kennedy Space Center.

Very cool! Almost worth going out on the ice for, but actually I think you win the smart award for staying home but remembering to send the camera with someone else so you could still see the fabled eagle. Ice fishing is something I absolutely don't understand. At all.

Great post. We sure have a lot of eagles around Rexburg this year.

i am sure it would be worth the cold and hours of waiting!

What a beautiful mooch. The only ones who beg me for treats around here are very unmajestic seagulls.

First of all, these are terrific with the Eagle!! What an interesting way to make friends too..(he's like, ya..make my day)! The last time you did your post on fish- we were having fish..last night I cooked up fresh white fish (yup)-two different types, but have leftovers too!! I made mexican the other day..was really getting into it as we were having our son over. Well, husband walks over with all this fish and the plan changed (I think I mentioned his brother is a diver who ocassionally fishes or partners do. I could not switch my brain over and didn't have time to hook a better recipe or wing something creative. Hey- call it bad timing? I have taken pictures but these are just wild captures~

Iwould never sit for hours on end in the cold to catch a fish - but I might to it for a photo of an eagle!!

I would love to try ice fishing.

WOW he did catch the papa of all! that is the largest brown I have ever seen- did you really photo shop this- you are clever that way...
By the way, enjoying so much the Jeanette book - captures my spirit, it does. The other one I have a bit of trouble with but am getting through it...very slowly . Thank you so much for them...marry me....

Went ice fishing once and that was enough. Mind you, if we'd had eagles coming for a visit, I probably would have loved it! :)Amazing, Leenie!

I'm not sure where you are getting your info, but
great topic. I needs to spend some time learning more or understanding more.
Thanks for excellent information I was looking for this information
for my mission.