(More stories of our ten day visit to the in January 2011)
DH and I decided to attend church on Sunday.  Using the meetinghouse locator on lds.org, and information on Google Earth we were able to locate a chapel and meeting times in Tulum, a half hour drive from where we were staying. 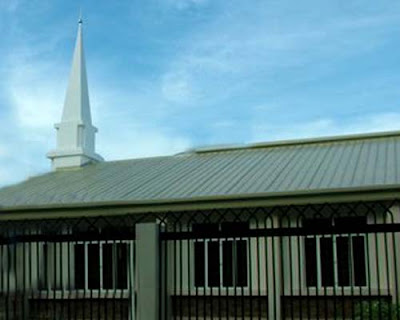 (An L.D.S. meeting house similar to the one we attended)
We arrived and were greeted by friendly members.  After we found a seat, more gracious people, all speaking Spanish, came up to shake our hand and welcome us.
The Church of Jesus Christ of Latter Day Saints or, Mormons, is a worldwide church.  Although the location and language may change, the gospel and the spirit of the members do not. We’re not world travelers, but we've found this to be true everywhere we’ve attended church.
The meeting was Spanish speaking, but we recognized the service and the hymns.  We felt at home so far away from home.
After the services we visited with more of the members and also a few people from the who were residents or visitors like ourselves.
On our way out of town we passed an open air fruit and vegetable stand. 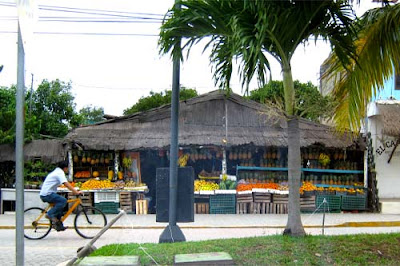 We don’t make a habit of shopping on Sunday, but the place was so inviting and DH is a sucker for fruit stands.  We looked over the produce and purchased a pineapple, some citrus fruit and some large and beautiful radishes.
Back in our rented car we pulled on to the main street and were almost immediately waved over to the median by a Mexican traffic cop.  He came to my side of the car, stuck his head in the window and asked for DH’s driver’s license. 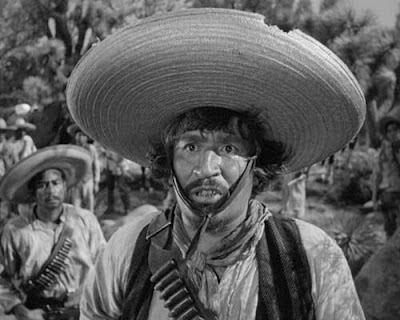 We said, “License, license? We don’t need no steeeking license.”
Okay, just kidding about that one.
We’d been warned about the police in by several sources.  We were told if we were stopped and they asked for license and passport that:
1.  Be courteous at all times.
2.  Don’t speak Spanish even if you are fluent.
3.  If they want to ticket and fine you—offer to pay the fine right there with a twenty dollar bill.  Usually the policeman will pocket the cash and send you on your way.
The officer examined DH’s license and told us in broken English that we’d made a wrong turn.  We were told we would get a ticket and we’d have to go to the police station to pay a hundred dollar fine.
DH handed me a twenty and I offered it to our new acquaintance.  In almost a slight of hand movement he slipped the bill out of my hand and the license in and told us to proceed.
“Go! Go!”  I said under my breath to DH. “Did you get my license?” He hissed.  “Yeah! Just drive!”
As we proceeded out of town we had the following conversation:
“That was one expensive pineapple!”
“Guess we shouldn’t have shopped on Sunday.”
“Yeah, God knows where we are even if we escape to .”
Posted by Leenie at 6:04 AM

Thank goodness someone gave you good advice! I'm glad it turned out well.

Your story made me laugh on a grey day.

I'm still chuckling!! It was similar in Indonesia, where 'corrupsi' (corruption was rife!!

Too funny! Sounds like living in Chicago . . . seriously. Half the police force is "on salary." And we have special Sunday vacation rules about things like shopping -- I thought those were church-wide?! Oops!

Wow, I'm glad that went as smoothly as it did. It's so sad that such corruption is out of control like that. I like that you found a place that felt like home so far from it. That's awesome. That community spirit all around the world - that's pretty amazing.

PS: Hope the pineapple was scrumptious :)

Awww! Sad and funny all at once!

I couldn't have passed up that fruit stand, either!

What an adventure! I had to laugh, but I was also afraid for you at the same time. And I'M glad you got his driver's license.