Just about everyone is familiar with the Rodents of Unusual Size (R.O.U.S.) in the movie, “The Princess Bride.” 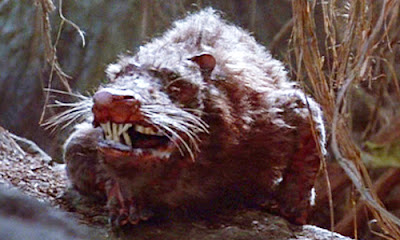 They were one of the dangers that threatened Wesley and Buttercup in The Fire Swamp.

When DH and I visited the in January, we went early one morning to a place noted for great snorkeling. 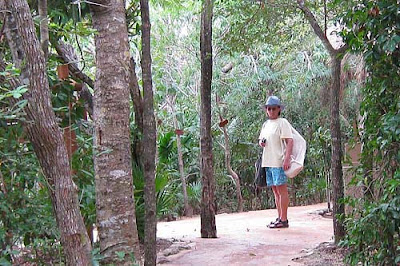 We walked down a trail in the jungle well ahead of the noisy crowds.  As we went, DH spotted a movement just off the path.  We got a few pictures of a large rodent at a feeder on the forest floor. 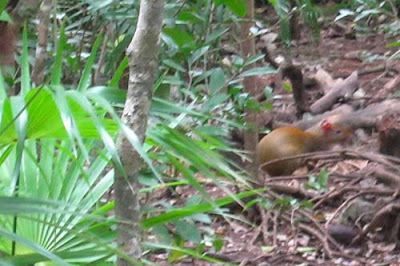 Not an ROUS, it was an agouti; a shy rodent related to the 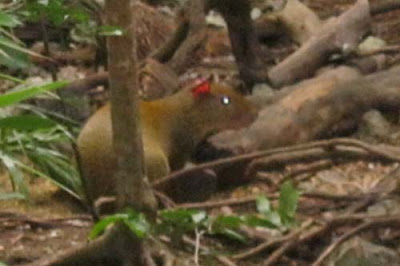 guinea pig and about the size of a large domestic cat (yeah, like our Thomas, that big). 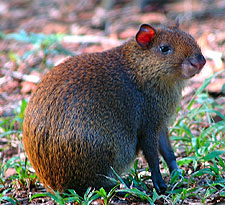 They are shy herbivores, mostly nocturnal, that can run and swim. They live on fallen fruit, leaves, and roots and have teeth strong and sharp enough to open Brazil nuts without tools. 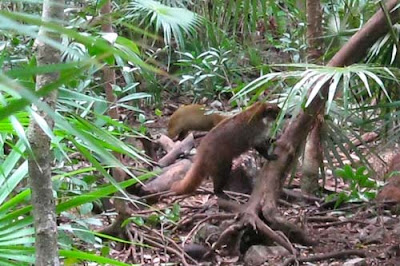 In only a few moments the agouti was pushed away from the feeder by a coati.  We had seen coatis before in . 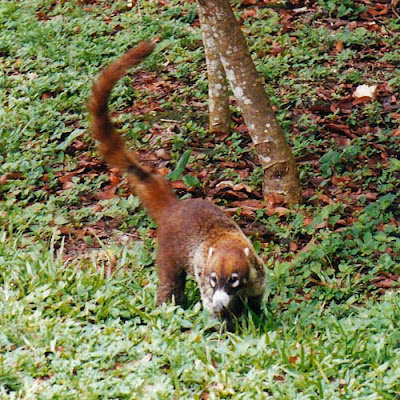 Coatis are from the raccoon family.  They are the size of a small dog and eat ground litter, fruit and even small lizards and birds.

The coati we saw in was used to tourists and was looking for a handout. 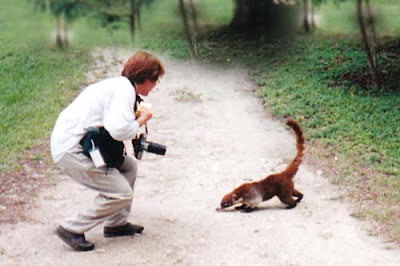 All I had in my pocket were airplane peanuts.  This guy wasn’t impressed.

I’m guessing most people have never heard of the unusual creatures mentioned above.

Another exotic fuzzy animal is the quokka.  I’ve never seen a quokka and probably never will. 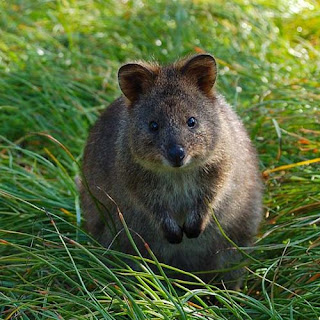 (Photo by skyreal photos)
They are marsupials also about the size of a house cat that are found on the smaller islands off the coast of .  They are nocturnal herbivores.  They are rare and their status is vulnerable.  Their name might come in handy in a Scrabble game.  You’re welcome.

As for me…I kinda feel like Wesley who had the life sucked out of him in the Pit of Despair.  As Miracle Max said, “It just so happens that your friend here is only mostly dead.  There’s a big difference between mostly dead and all dead.”

Miracle Max’s cure for Wesley was a miracle pill coated with chocolate, “The chocolate makes it go down easier.  But you have to wait fifteen minutes (in my case fifteen days) for full effect." 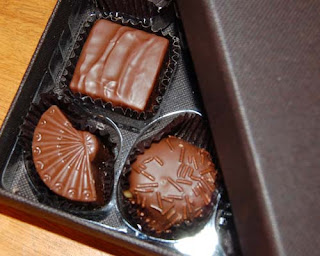 I got chocolate covered miracle pills delivered to me the other day from a young gentleman who knows first hand about the long days of recovering from surgery.

Along with this kind of help and a prince of my own who does laundry, cooks and vacuums and goes out on demand for Hot and Sour Soup and Won Tons; I’m feeling much better.  And like Wesley said, “I’ve always been a quick healer.”
Posted by Leenie at 9:33 AM

You sound in fine form and very cheerful - so get well quickly.

So pleased that you are not ALL dead!Rodents of various sorts must be the getting well process that brings these to mind- next you will be on to some critter less grounded, perhaps.Be well soon, I know that you will be- hearty Leenie! Take advantage of the break from the usual vacuuming, dish doing,dinner making, tedium- You might want to splash watercolour around the room for fun. Chocolate is our friend...

Glad the recovery is going well - and of course chocolate aids healing!

Leenie Get well soon it sounds like you are in good hands. I love the rodents well let me rephrase that I love looking at your photos.
Chocolate is my miracle pill also. Rest and take care of yourself Ok. B

So pleased to read your post and note no one has readjusted your sense of humour - it is just great. Being a great follower of all natural history programmes I was familiar with most of your friends in film form but the quokka is a new one to me!
Keep taking the chocolate, so important not to stint on your medication!

Won ton soup and chocolate - it just doesn't get any better than that. Recuperate well, dearie!

Please keep your daily life's pace like cats of usual size, not the Rodents of Unusual Size.(LOL)（;´▽｀A

I've never heard or the agouti or the coati. But I have heard of the miracle powers of chocolate :)

Take it easy, take it slow, and take good care of yourself!

I wish I could challenge you to a game of Scrabble, Leenie - no one here likes to play...sigh...

Glad your surgery went well Leenie and that you are on the road to recovery. Was getting my head around all those strange creatures, agoutis, coutis then saw the quokka and felt right at home in familiar territory!
Happy healing Leenie, and enjoy the chocolate!

Hang in there and let all the others do the heavy lifting for you!
It WILL get better and you will feel less run over by a truck.
Sending lots of healing vibes your way.
Loved the marsupials.
Candy is good too.
Do they have Cadbury Chocolate Mini Eggs by you?
They look like little birds'eggs robin blue etc
sugar coated with choc inside.
send your mailing address if you can't get them & I will mail.

Glad that you have chocolates-and hope they work! All those creatures are very sweet looking-and all look a bit like something I have seen before but no, I have not heard of any of them.

Sounds like you benefited from much needed TLC! Nothing like chocolate and flowers..well I enjoyed these critters, the first (especially the size and description of teeth) remind me of the mongoose we have here..the last is so cute! I wonder, is it pretty friendly? Rare though huh..curious if anyone made pets of them? These are great images of your adventures.. glad to hear about your update and your doing better Leenie!