I'm still working on those six New Year's resolutions.
Two I'm doing okay on.  One I had to re-write
mostly because the spirit was willing but the flesh was weak.
I found a website that proclaimed one could go from a
couch potato to running a 5k in just twelve weeks.  Maybe
some people can but not me.  When running became such a chore
that I hated to get up; I just re-wrote my resolution.  No more
running.  Running--bleeeccchh.  My knees thank me.
I'm back to walking and occasionally riding bike.

Another plan was to do a little drawing every day.  This turned into
drawing a whole lot of stuff on one page. 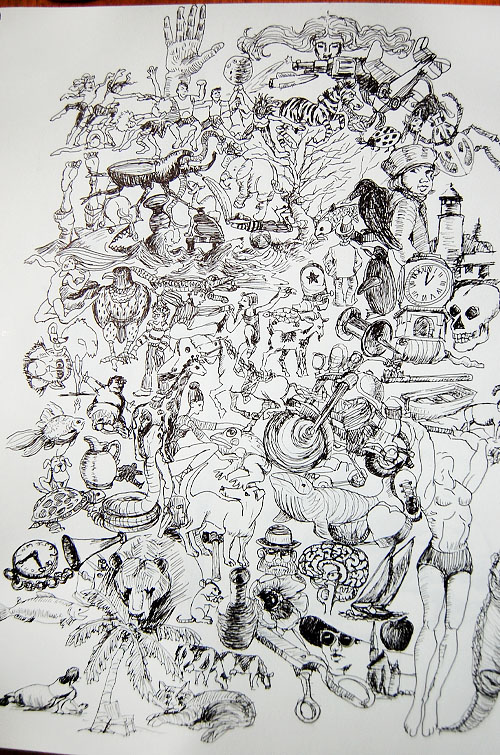 Looks like I'll have to go to the next page now. 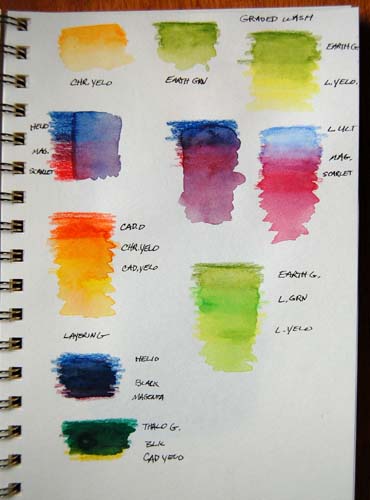 Another project was to learn a little more about my watercolor pencils
so I can use them for on-site sketches.  I played with layering
and washes and combinations of colors. 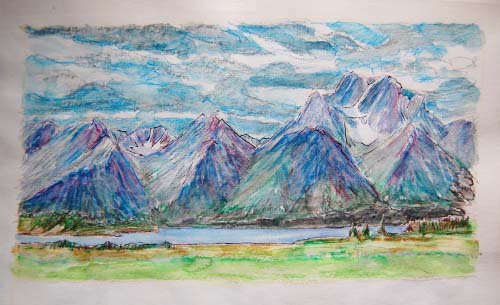 I tried using them with permanent drawing pens. 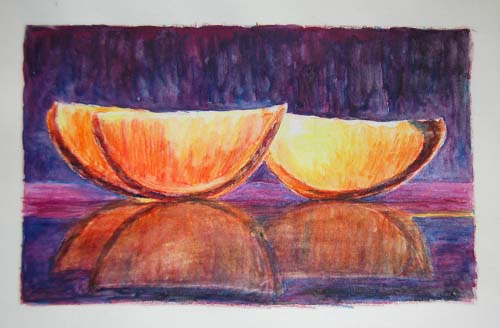 The ones I have, Faber-Castell Albrecht Durer, brand have wonderful intense colors. 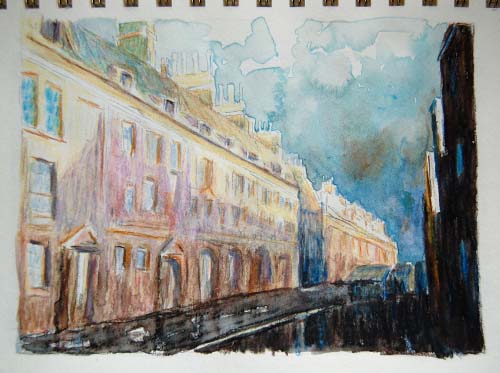 But with a little practice the colors can also be soft and misty.  Like a rain-washed street.
Posted by Leenie at 7:51 PM

your ink collage is something else! neat! glad you're working on resolutions. i never really even made any...

What a lovely jam-packed sketch page. It lifted my spirits. As for the running, it made me smile because I had a half marathon goal this year using the same sort of training program. Needless to say when schedules fell through I wasn't exactly heart broken not to be participating in the race.
Turns out i don't mind running, but I hate running a specific amount, distance and pace.
I'm more of a kickboxing and yoga person myself. Keep the awesome paintings and illustrations coming. You're inspiring.

It is going to take me a year and a half to sort out your drawing page that is f-n AWESOME! Your very good with the water colour pencils! Beautiful- KOI makes a little field kit for water colour - has a brush that has a water reservoir and little painty squares...Erik uses one on his ink drawings - cool and very handy.
Running- running ONLY if there is a bear inspiring you to do so...otherwise a brisk walk will do. There- off the hook for that one!

Wow-you seem to be doing pretty well! I love the page of drawings and your pencil watercolours are beautiful. As for running-I tried it-bought the fancy shoes too-but I hate it-can't do it! It hurts my shins, and no matter how I tried to do it it still did. So yes, walking is the thing! I pumped up my bike tyres the other day-but have not been out on it for a very long time.

Your drawings are great, Leenie! That first one has so much in it. Love your colors in the other pieces!

So...maybe the running thing isn't working out, but your artwork sure is. Your watercolors are always so pretty, and the sketch collage looks like it must have been fun!!

Love, love, love Couch to 5K! Sorry it didn't love you. My daughters had tremendous success with them, and I did it with them just for fun even though I'm already a runner. Anyway, I thought it was foolproof. But you have proven me a fool....
I can't really talk about your drawings, Leenie. You must understand that. THEY ARE AWESOME. My drawings are your Couch to 5K. I am counting the seconds until I can quit.
And I think it's fantastic that you continue to hone your already-formidable watercolor skills. Thanks for continuing to put so much beauty in the world!

Bother the running Leenie - those drawings and colour sketches are magnificent.

Running is pants, I have to agree. But oh my goodness, you superceded yourself with the drawing resolution! I am blown away. Simply magnificent. I haven't used watercolour pencils since my college days... you're making me want another pack. Not that I could match that! Man you're good.

Running Yuck I am a hiker and walker too.
Love love love the first drawing. I love them all but I guess I really like busy:)
I love seeing your talent come to life.
B

So cool! Your art is wonderful. I'm a big fan of Andrew Wyeth. I see "Christina" in the lower left hand corner of your collage. My favorite of his, is "Master Bedroom".

As for running, I can't do it. Too much wiggling where it shouldn't, and too much pain in places that hold me upright.

I admire your illustration technique.
It's my favorite picture looks like cartoon painted with ink. You have plenty of talents.

I didn't make any resolutions this year, as I never keep them! If you don't like running, try an elliptical trainer - a good workout without the jarring on the knees. I love your rainwashed street!!