Once again DH and I were “volunteered”
to help out with girls camp. 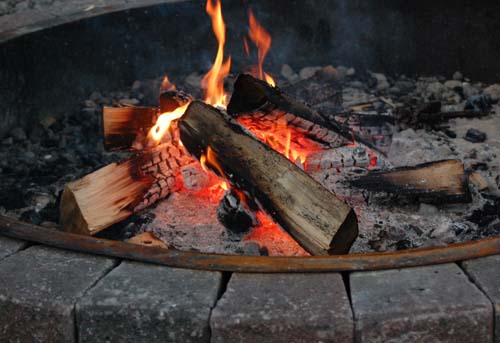 Camping:  the art of getting closer to Nature while
getting farther away from edible food and comfortable sleeping conditions. 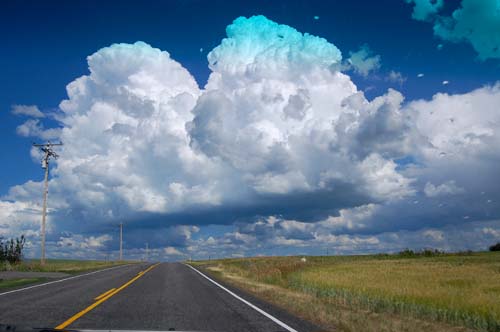 It was easy to find the camp.
Everyone knows storm clouds go out of their way to rain on tents.
We just followed the clouds. 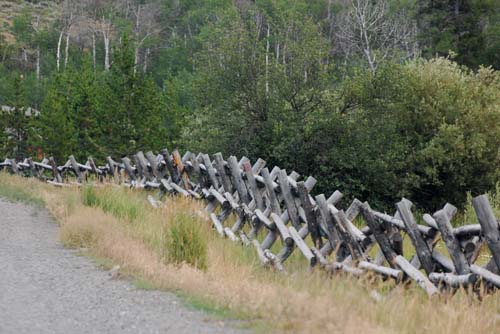 Down the dirt road. 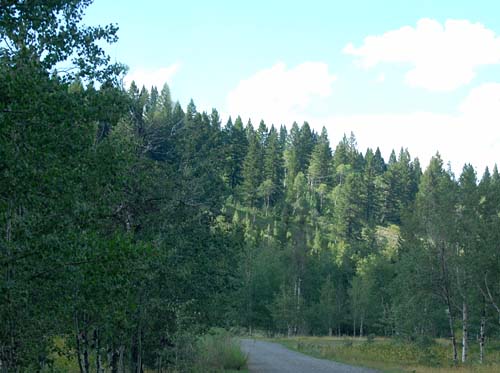 And into the forest.  We were soon out of range of any cell phone and into a no technology allowed zone.  Then we just followed the smell of mosquito repellent, burned marshmallows and hair spray. 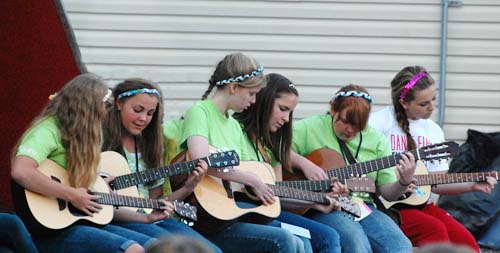 After a very good dinner cooked over the fire
by some of the girls we were invited to the evening’s entertainment. 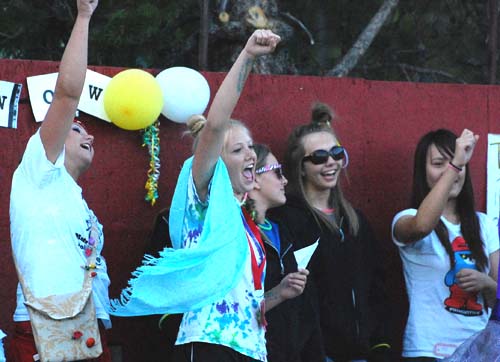 There was lots of enthusiastic drama. 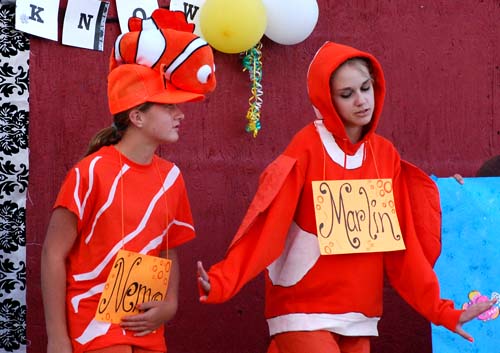 One skit featured Nemo and his family and friends. 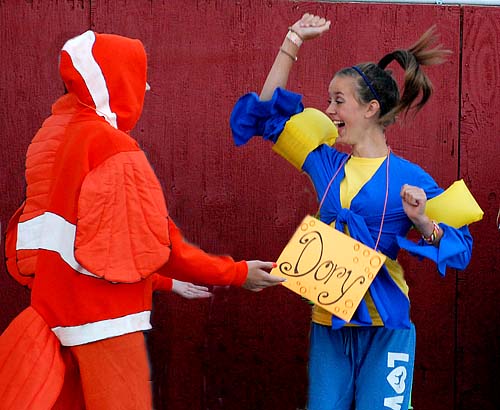 We didn’t need name tags to know who each character was. 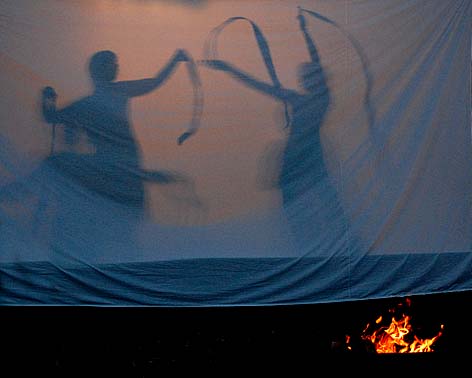 One of the most unusual skits was a bit of Shadow Theater. 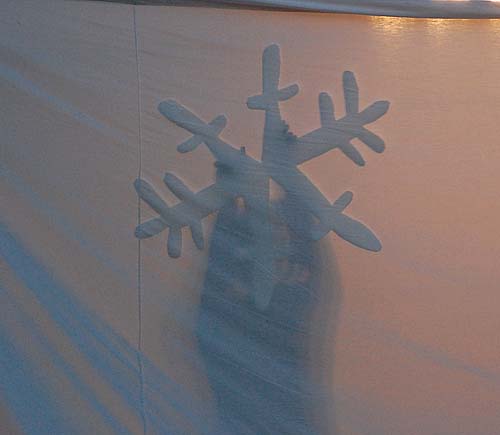 Everyone is as unique and amazing as a snowflake. 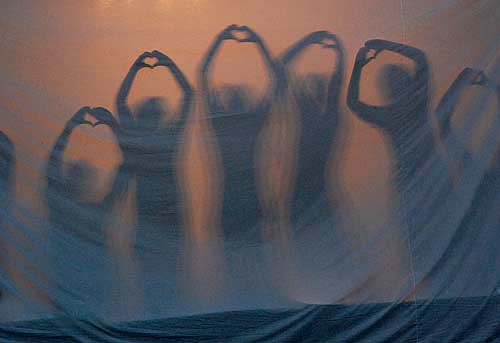 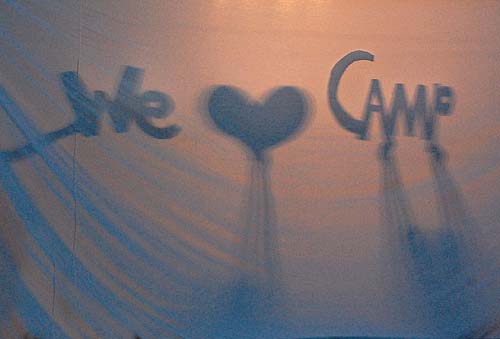 Parents may pack up their troubles and send them off to camp.
But with some good leadership, the exuberance can be directed into superb creativity. 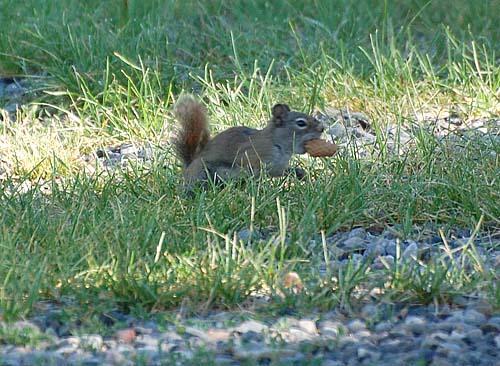 Fortunately DH and I didn’t have to spend the night in the same sleeping quarters as the leaders and girls.  Even though sleeping on rocks and lumpy mattresses could be thought of as therapeutic—like shiatsu massage, we decided to sleep in the back of the Subaru.  It was much quieter.

Note to self.  The need to urinate at night
increases in direct relationship to the hour past midnight. 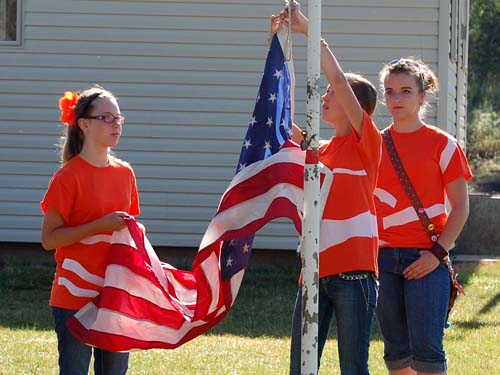 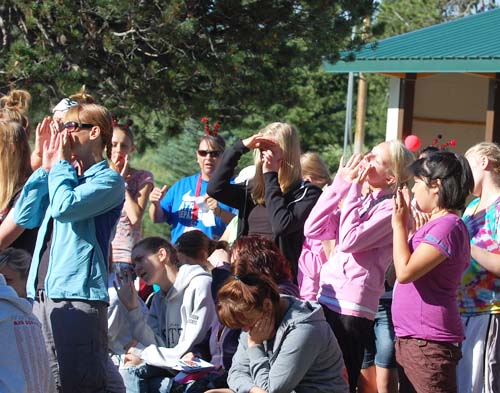 everyone was encouraged to “Rise and Shine!” 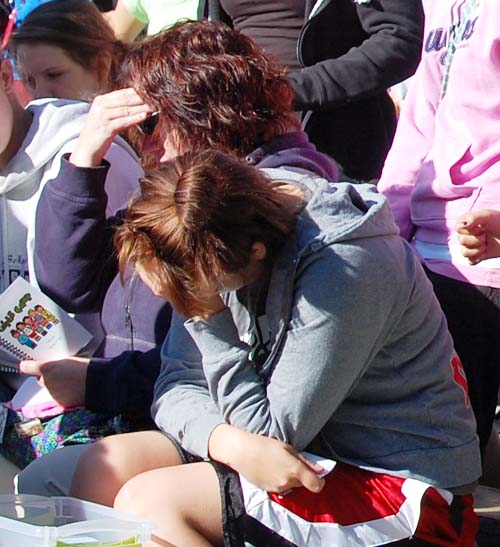 Some campers are just not morning people. 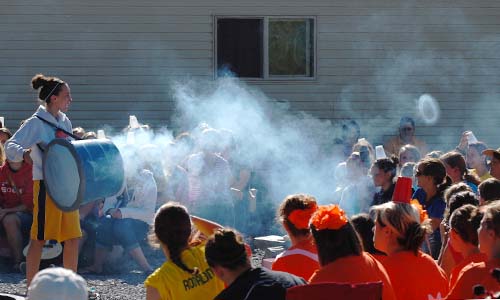 A clever bit was put together to illustrate the power of small influences.  Holes were cut in the bottom of big buckets and the tops were tightly covered with shower curtains. 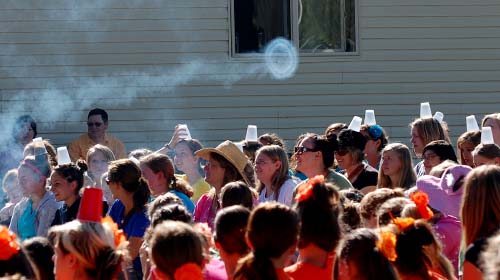 Using a mist machine the buckets were filled with fog.  Some of the girls beat on the “drum” of the buckets shooting out smoke rings to knock plastic cups off the other girls’ heads.

I have no photos of the assigned duty given to DH and me.  We were judges for a relay race involving knot tying, fire starting, shelter building and first aid.  I was a timer and I used an app on my phone to keep track.  The girls performed their tasks wonderfully.  When the events were over I checked the data on my phone.  Not only had I kept track of the times but I’d walked over two miles and burned 350 calories.

P.S. Pine sap holds down hair better than hair spray but is more difficult to remove.  I got a very itchy mosquito bite on my toe--through the heavy wool socks I wore while sleeping.  One determined blood sucker.
Posted by Leenie at 6:43 PM

Love the Not Morning People. The smoke rings are amazing. I've never seen that before.

This sounds like quite the adventure! How creative we get when we don't have technology to entertain us! :)

Sounds like a wonderful camp! So creative! My grandgirls are not early risers either..so those girls looked normal to me! :)

love the shadow people and the ring of fog! never want to grow up, eh?

I bet the kids enjoyed every minute! The clouds are fantastic and I love that fence!

haha...looks like a fun time...LOVE the shadow theater stuff, AND that squirrel!! what does he have in his mouth?? it looks HUGE and he seems to be trying to get away without being spotted!

Oh this looks like fun. I think everyone should go to a camp at least once in their life I say that but have never been.
I love your photos and I did know that pine tar works well and that urinating thing gotcha:) B

All that enthusiasm is contagious. I'm smiling from ear to ear. Thank goodness for the backs of Subaru's.

What a wonderful camp for the young ladies! Thanks for going. My kids were once campers and are now counselors every summer at our church camp. It can be a life changing experience for some campers.
PS..I'm stealing the shadow theater idea

I admire the girls are creative and powerful !
I worry you must be a little tired.

That's quite the camp setup they've got going on. Were you "allowed" to use that app? ;) Don't get me started on peeing in the night! (Me and my pea-sized bladder.) The worst is when you're camped at the opposite end of the site and all the crazy big bugs are out by the light. Give me a nice outdoor spot to pee in any day. But perhaps I have said too much...

Looks great fun.
Although the urgent pee has it's problems, nothing surpasses husband's story of seeing a woman in the Australian snowfields racing down the slopes reclining red-faced on skis with her pants down in full view of everyone. Seems as she leant back to hitch up her pants on trying to have a discreet pee, the position lent itself to the skis taking off and the more she struggled the more she gained speed momentum. She landed in a crumpled exposed and highly embarrassed heap at the bottom of the crowded ski lift. Story has it she cut short her holiday.
I didn't see this but boy,I wish I had.

Looks like such fun! I liked the not a morning person photo too-made me laugh!

The smoke rings are amazing, made me wonder how they did that!