DIDN'T SEE EVEN ONE DEVIL

The Virtual Paintout location for August 2012 is Tasmania, Australia.  I "traveled" around the large island just south of mainland Australia by way of Google Streetview.  According to Wikipedia, must of Tasmania is still densely forested, with the Southwest National Park and neighboring areas holding some of the last temperate rain forests in the Southern Hemisphere.

Most of the forests I saw from the Google Camera were kind of scruffy and not too picturesque so I went down to Macquarie Harbor near Strahan on the west coast.

I selected this view of a boat landing and did a watercolor of the area. 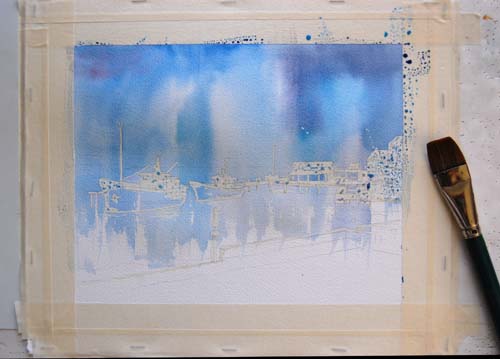 I first brushed in a loose blue sky and brought the color down through the water. 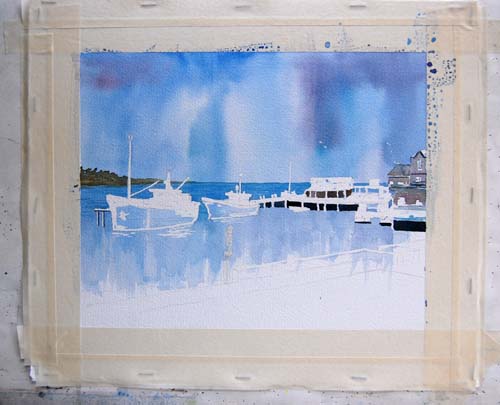 I had masked out the whites of the boats allowing freedom to fill in colors around
them.  I dropped in the darks under the pier to give me a range for my values. 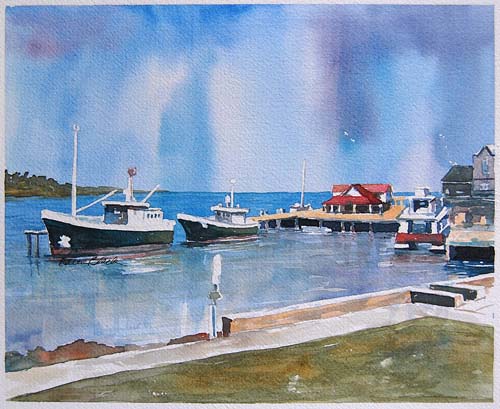 Then I got so involved in working on the painting that I forgot
to take any more photos.  This is the finished product.

You can see it featured here on the Virtual Paintout Blog for another few days.
Posted by Leenie at 4:32 PM

Beautiful, Leenie! Makes me feel like I'm right there.

That is very nice.

Oh I love it when you explain the process. I need you to teach me I am sure I could have fun learning.
Awesome work Leenie. B

Your painting is beautiful! Fantastic job! No additional photos needed.

Leenie!
You are so talented.
I'm really envious!

oh wow!! thanks for showing your beautiful art from start to finish!! i love watercolors...but i'm not very good at painting!
what talent!! gorgeous!

What an awesome collection of art, and you've pulled a blinder with that one, Leenie.

How do you mask such skinny areas?!!!

CarriBoo: It's a product called liquid frisket. It's sort of like rubber cement but much thinner so it can be applied with a brush. A brush you don't care if it gets filled and possibly ruined with glue, however.

Your Tasmania painting is fantastic. It does what a good painting should...improve on the actual scene. The sky in your painting is so interesting and dramatic. I love it!