THE CASTLE AT ELSINORE

Most people learned the location of the country of New Zealand in their grade school geography classes.  But how many know the location of the island of Zealand?  I didn't until it became the setting for September 2012's Virtual Paintout.  I went there using Google Maps and Google Streetview and soon stumbled upon a great place to set up my paints and try my hand at art in Denmark. 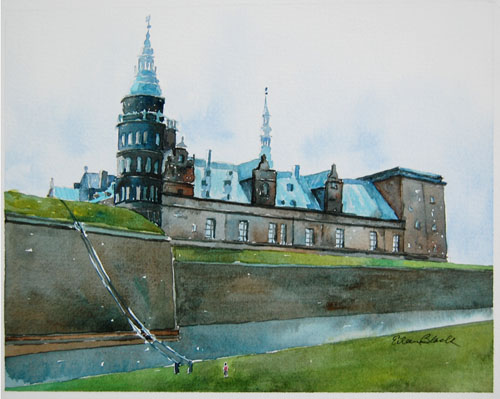 Kronborg Castle is a military fortress which guards the narrow passageway between Denmark and Sweden.  It is the most famous castle in Denmark and is located next to the city of Elsinore or Helsingor.  It is the setting for Shakespeare's play, Hamlet. The play opens on a dark and stormy night as Horatio and Marcellus meet a guard on a watchtower of Elinsor's castle. Later Hamlet sees his father's ghost there and learns the truth about his father's murder by the power-hungry Uncle Claudius. 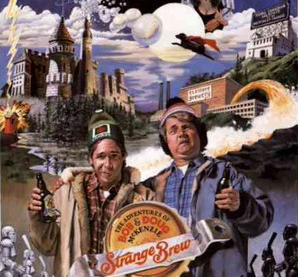 I've also been reminded by one of my children that Elsinore is the location of a brewery
made famous in Bob and Doug McKenzie's 1983 movie, Strange Brew.
If you've seen this one and paid attention to the story, it is
blatantly Hamlet, right down to the ghost of a slain father.
Take off, eh?

You, too, can visit Elisnor here.  You should be able to open Google Streetview and find the little yellow man. Select him and move him to get the map of the location. Zoom out with the minus icon so you can  move the yellow man and travel around the castle and then go on around the island of Zealand, Demanrk.

For more of my paintings click here "Watercolors by Leenie" or the red link --upper left column of this blog.
Posted by Leenie at 4:13 PM

Oh I love it Leenie. B

You do such a great job, Leenie!

What a gorgeous painting! That's beautiful!

A virtual tour..cool. Love the painting.

Super painting!
Did you know that I never actually knew what Elsinor looked like!
and I was an English teacher!
Happy weekend!

So lovely! And so glad to see you're painting...someone, somewhere, is making beautiful things! That is a reason to get up in the morning right there...thanks, Leenie!

I had heard of Zealand, and of course of Elsinore because of Hamlet, but didn't know that the castle was there, or where it was really-well-apart from Denmark!
I love your painting-it has a brooding feeling quite appropriate to the feeling about the castle I get from the play. Fun challenge!

SO very beautiful!! LOVE your art!!

What a cool spot! And gorgeous painting. There's always a power-hungry Uncle behind it all!

P.S. Your cake! LOLOL! Somebody ate half of it in the oven. Oh, I am so glad my brain has returned to get a load of Leenie! :) (Thank you for your comment last week.)

Oh, this is a beautiful water colour, Leenie! What a good idea - to have a virtual paintout!
PS Re the angel cake below - I have heard of angel cake a lot. but have never tasted it. Is it like a sponge cake, but lighter? Anyway, mine is bound to come out like the one on the left, hahaha!

Beautiful scene! Any idea what the ropes are for that are hanging down from the castle? I had absolutely no idea there was a Zealand; although it makes perfect sense since there is a "New" Zealand.

I remember actually LOVING that movie once...

As usual, a beautiful painting.