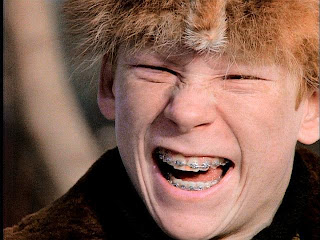 “Scut Farkus! What a rotten name! We were trapped. There he stood, between us and the alley. Scut Farkus staring out at us with his yellow eyes. He had yellow eyes! YELLOW EYES!”

I saw A Christmas Story pop up during some channel surfing and had to settle in to watch.  I’m not real big on holiday movies, but that one is an exception.  Not sappy, and Ralphie doesn’t learn any life changing lessons or hear angels sing; although he does do a number on that playground bully which warms my heart.

My Scut Farkus was a big kid with toothbrush hair and smeary glasses. We’ll call him Jed.  His toady was his little brother with the same scrubby hair.  Our ride home on the school bus took almost an hour and Jed and his brother and sister got off just before me and my sibs.  That’s a long time to spend every day with a kid who finds you an easy target.  He could sling slurs, point out flaws and create nick names that might last for years.

I don’t remember coming to any physical harm.  We were kept in our seats by the bus driver, Boots McClure.  He was an old guy who always wore a cowboy hat.  He watched his load of rowdies through slanted eyes in his rear-view mirror.  When Boots stopped the bus in the middle of the road and got up from his seat a hush would fall over our snot-nosed crowd and we’d all find something interesting to stare at out in a farmer’s field.

The verbal abuse from Jed extended beyond the bus ride.  When the winter weather got nasty, students were turned loose in the gym to run during recess.  I remember once getting so fed up with the harassment from my nemesis that I went after him underneath the basketball hoop.  While he laughed, I punched and pushed him.  Then he pushed back.  Suddenly my nerdy big brother appeared.  He’d happened by on his way to a calculus class. Big brother wasn’t known for conflict but this time he came out of his world of numbers long enough to bring his text book down on Jed’s head.  “Looks like math is a little hard on Jed,” he commented, and then continued on his way.

An intestinal flu virus can sweep a school like wild fire.  Boots learned to react quickly when one of his passengers turned that tell-tale green.  He’d slam on his brakes, pop open the bus door and hope the kid made it out to heave on the roadside. Even when it was mopped up; bus barf left behind a stench that turned a long ride into torture.

So when I wobbled up to the front of the bus, miles from any house, Boots took one glance, stopped and let me out. Disregarding safety I ran around to the front  to hurl.  I wanted to be out of view of my tormenters in this moment of indignity.  When my guts were empty I wiped my mouth on my sleeve and sat on the bus bumper until I had enough energy to stagger back on board.  As soon as I was seated the taunts began.  Jed was sitting in the seat behind me and he’d been provided with new ammunition.  I took it until I’d gained back my strength.  Then I stood up on my seat, hauled back with my metal lunch box and bloodied his nose. When I realized what I had done, I plopped down beside my sister and glanced up at the front of the bus.  Boots had watched the whole thing in his mirror and kept on driving.  Jed got off at the next stop.  He had tears in his eyes and he still had blood on his face.  I don’t remember him bothering me much after that.

So when I see A Christmas Story is up on the screen I grab some popcorn and find a seat.  I might not have had the vocabulary Ralphie did but I had a metal lunch box. Ha!
Posted by Leenie at 4:54 PM

I love a good bully beat down story, and this was a good one!

I'm just curious...whatever happened to Jed? Has he turned out to be a nice guy now that he's older? It's a good lesson to teach our kids how much people remember about either our extreme nastiness...or our extreme kindness.

"Jed" mellowed with time and grew up to be a pretty decent guy. Unfortunately he was killed while serving in Vietnam.

Math can be punishing! Glad you finally got your lunch box involved!
I am sure that his version was different- the one he told to his mother, and she said "you stay away from that wicked girl, my dear sweet lad."
There was a bully in our hood- Donald- he was more than a bully- tortured the feral cats and roasted them over the incinerator- ended up killing a little boy "by accident"(gun) - he left town after that. Amazing how much better i could breath...

The only instance of bullying I recall is stopping to thump the bejammers out of a fellow in my class who was thumping on my little brother, reason totaly unknown and my little brother was a peacemaker.

Sometimes you've just got to stand up for yourself...it's the only way.

What a fabulous story!! I found myself hoping you'd hurled in Jed's lap. Bloodying his nose is just as good. :)

I can remember my older sister whacking a boy with a cricket bat when he tormented us, and I think she might have thumped a girl who had charmingly told us to "drop dead and fester" I know that violence should never be the repsonse, but sometimes it is the only thing that works!

My father occasionally told me about how he learned to stomp on a bully's instep in times of crisis. But I remember, in particular, a story he told of a fight he got into with a boy (a bully?) who ended up getting his jeans ripped in the tussle. The other boy cried because they were his only jeans and he didn't have any prospects for getting more. Dad felt terrible about it, having been previously unaware of the financial and other troubles the boy faced. As I remember it, the boy was easier to get along with, once Dad understood him a little better.

As a side note, it's funny that the Christmas Story bully always reminds me, just a little bit, of a redheaded, freckled cousin of mine. It's only because of appearance; my cousin has never been anything but kind (around me). But I still briefly see my cousin whenever I see that show.

Joseph: If you're the Joseph I'm thinking of, your dad seemed to know how to use his words to joke, or at least talk, himself out of conflict. He made friends out of most of his enemies. As for that redheaded cousin--there IS a resemblance.

I should have had a lunch pail way back when...I suffered a bully and her friends until they graduated one year before I did. My Senior year was HEAVEN!

I don't remember the bullies but I do remember our school bus driver. We called him Porky as he, and the old fashioned bus had snout-like qualities. It was the late 50's, early 60's, and every stop to collect children had mothers with babies on their hips, waiting, some in dressing gowns and curlers, chatting away to each other.
Now everyone, "dressed and stressed" for the office, drive their children to school in their big SUV's.
Aspects of bullying however, never change.
Sorry to hear the 'Jed' eventually made the ultimate sacrifice. Very sad.